Qs on art and my replies

Q: What is your favourite art work and why?

Krishna: Undoubtedly, it is "The Thinker". The Thinker (French: Le Penseur) is a bronze sculpture by Auguste Rodin, usually placed on a stone pedestal. The work shows a male figure of over life-size sitting on a rock with his chin resting on one hand as though deep in thought, and is often used as an image to represent philosophy. 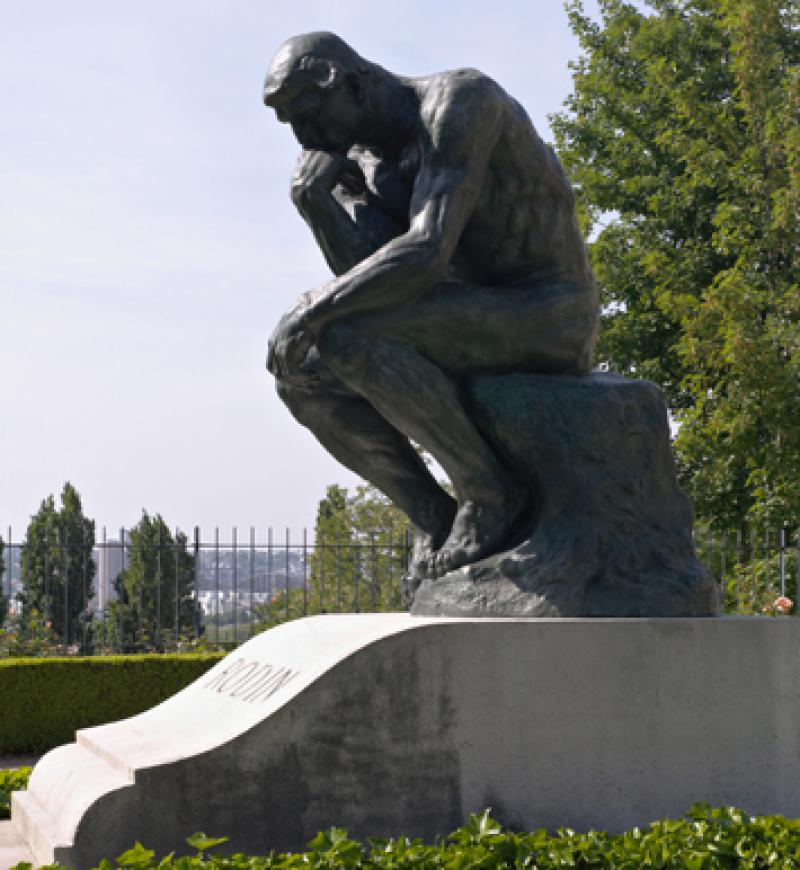 I have a great AFFINITY towards intellect. It gives me a high. Whenever, I see ''The Thinker", it rewards my brain! Why? Because the work denotes intelligence, logic, critical thinking, philosophy, literature, science, art, poetry and several other things I am associated with! In a way I am familiar with this type of intellectual pursuits. I can relate to it in a big way!

Q: What are some evident mistakes in famous paintings?
Krishna: Famous or not there will be some unintended ‘mistakes’ in most paintings, sometimes created by illusions. I myself faced a similar illusion in one of my works.

I wonder how the people in 22nd or 23rd centuries interpret my work! :)

Krishna: That is a perception depending on your experiences.

Does art take you to a higher realm? Does it enhance your critical thinking and make you think it is the ultimate and you won’t find a more better view of things?

If your art answers all the Qs your mind poses to your satisfaction and shows the best way, you can treat art as transcendental.

Different people follow different routes for enlightenment. Although I am a polymath, my view is different from yours. Read here why :

Q: Is artistic expression simply a metaphorical autobiography of a person's emotional life?

Krishna: Not necessarily. Different artists have different reasons to create art. For me , it is not!

I use art and literature to communicate science! To make science easy to understand.

Of course I create art on other themes too, mainly to tell others the new connections I made, meanings I found, to show things in different light.

Q:When different galleries represent the same artist, how do they decide on the price of the work?

Krishna:   Know what? I was shocked to learn from art gallery people that ‘an artist’s name’ counts a lot. What MF Hussain’s painting demands is not what an ordinary artist’s painting gets even if it is done in a better way.

It just is your perception what decides the price. Name, fame, pulls and pushes what count. Not reality. And there is a whole lot of difference between reality and perception in the art world. It is sort of pseudo hype.

So different galleries quoted different prices for the same work of mine. What made them decide on the price is anybody’s guess, because they don’t understand my work in the first place.

Mine is a rare ‘art work based on science and literature’. You won’t get it much of that type of work anywhere in the world.

But I am unknown in the art world. So even if my work is rare, and extremely difficult to create ( connecting several fields - science, art, literature, religion, philosophy is not easy), I cannot demand what I want, according to art gallery people. Some told me they would ‘promote me’ if I pay money to them. Accept the rules or forget about selling.

I stopped visiting art galleries. I created my own gallery. And succeeded to some extent. I don’t trust art galleries anymore.

Anyway, I am a scientist and selling art is not first priority to me. I just use the money to promote my science communication and help the world, not for my personal use.

I sympathize with new artists and my heart goes out to people whose life depends on selling art. Some told me they do odd jobs to earn money and live. While a big name can command millions every time it goes to the market, small names can’t even eat enough food. That is the reality of the art world.

Completely opposite to what we see in the world of science. Cultural shock? Yes!

Q: Is it really very necessary to write understandable poetry?

Krishna: Yes, if you want people to enjoy what you have written or to make them think about it. What is the use of writing something if you are not able to communicate exactly what you are trying to say?

If you don’t want others to understand your poetry what is the purpose of writing it? You can just keep the words sealed forever in your head like some do!

Q: Why is art inferior to science?

Krishna: Inferior? Art is a part of science now.

Contrary to what people think and say, Science already has in built- what the artists call- 'aspects of art' - like creativity, observing, imagination, visualization, imaging, pattern recognition, pattern invention analogizing, dimensional thinking, transforming data into visual and graphic forms, converting theories into mechanical procedures etc. Scientists have been using all these things successfully since ages! What are science-illustrations, X-ray and MRI images, satellite images, PET- CT scans, angiograms ( processes that allow doctors to view the flow of blood in blood vessels ), 3-D mapping and 3-D printing (1)?

All scientists know that 'scientific visualization' is one of the important aspects of the field of science. The purpose of scientific visualization is to graphically illustrate scientific data to enable scientists to understand, illustrate, and glean insight from their data. Data visualization is the study of the visual representation of data, meaning "information that has been abstracted in some schematic form, including attributes or variables for the units of information". The main goal of data visualization is to communicate information clearly and effectively through graphical means. Scientists apply their taste in visual aesthetics to their visual displays of data as do artists, as in the case of a scientist who carefully selects colors or arranges forms used in his/her design of a chip or rendered image. These are aesthetic decisions, signs that the scientist is to some degree thinking as does a visual artist. Although untrained in the processes, many of the best scientists frequently work from visual geometric models in their minds, and identify research problems on the basis of these visual models or paradigms. From the paradigm, the analysis and experiment is derived. This ability to pre-visualize a potential solution to a problem and to build 3 or 4-D (3-D plus time) conceptual models is basic to their scientific process.

However, Science exists apart and independent of the human condition and humanities.

Without science, this universe wouldn’t have come into existence in the first place. Only when the universe ‘s originated with the help of the scientific principles, all the galaxies, stars, planets came into existence. Then life originated and then religion and art became part of human life.

For example, E=mc2 is an eternal condition and did not require the mind of man to understand it before it sprang into existence.

In contrast, the drafting of the Declaration of Independence required hundreds if not thousands of years of study into the human condition, and even some of the truths contained therein are still not self-evident. Art needs the effort of a human mind. Arts cannot exist without human beings and science is over and above human existence.

That is the importance of science.

Q:In many universities across US and Europe 'Art Science' stream has been introduced. What is the purpose of combining art and science? What do students explore in this course?

Krishna: The main purpose is communicating science through art. Making things easy for common people.
The importance of science communication through art

But some are making very tall claims that they can achieve several other things too. I myself countered this: Tall claims and failing proof of science-art interactions!

I have been working in multiple fields for the past several years but the only benefit I found ‘s making science communication easy and this is the only proven benefit of combining science and art. Any other claim has no evidence and can be considered as pseudo-scientific.

Q: Do scientists experience in understanding art , and why?

Krishna : I do create art, right in my science lab!