Q:Are compliments good?
Krishna: Compliments usually make people feel good — both giving and receiving them.  Compliments help us communicate that appreciation we feel toward one another.  A compliment is any sort of sincere appreciation of a trait in someone or a behaviour or an appearance.
Q: What is the best compliment you got?
Krishna: I get several compliments. If they are about my figure or appearance, I don't give much importance to them but just say 'thanks' because somebody put an effort into noticing and appreciating something about me and telling me about it. But they don't impress me much.
The compliments  regarding my brain, my intelligence, my personality and my work are what really matter to me.
There are a few compliments I am a bit biased  about. Let me tell you about them.
1. This is from an American scientist and a total stranger. He told me, "Krishna, you are a voice of reason in a cacophony of self-confirmative opinion."
I was thrilled about that.
2. The second one is from an Indian student, who is also a stranger but he told me he 's my follower and reads all my science articles and write-ups: "Each one of your answers on science and articles, poems, artworks and everything you do reflects your  dedication for science. I have never seen anybody who so passionately loves science. You are a great inspiration for not only students but also scientists!"
3. This is also from a  total stranger who read one of my articles:  "Today I found the next lady Einstein in you madam".
4. This one is from  a few men I know: "Krishna, you are a great inspiration to us!" When men say a woman 's their inspiration, I think that is a great compliment.
5. The next one is from one of my colleagues: 'Anybody in this world can make mistakes in their lives but Krishna will never make any mistakes!'
Although I like this fifth one, it also made me think a lot. It really frightened me.
Don't I make mistakes? When I was young, I used to make several of them and even got scolded by my parents.
I think only after becoming a critical thinker and a scientific thinker, my mistakes got reduced and finally became non-existent.
OK , let me also tell you I shut off the door on ignorance, irrational thinking, and stupidity. Especially if highly qualified people have these qualities I cannot tolerate it. If people who don't get chances to improve themselves because of their lack of education, circumstances in their lives, you can understand.
But people who are  placed in high places like professors and scientists, who are highly qualified, who get each moment of their day to learn new things and have the capacity to analyse those things rightly don't use their brains properly, it is they themselves who are responsible for their pathetic situations. I cannot tolerate this apathy. Is this a mistake? I don't think so. I am mentioning this particularly  because  recently a person I respect told me to  broaden my tolerance towards them too. I gave it a thorough thought but realized I cannot compromise on this issue. Lack of interest in improving your personality and thinking is not good for human beings.
So even if my intolerance towards such people looks like a mistake, it isn't in reality.
Don't I make any mistakes then? I do make some but there are extensive analyses, genuine understanding, and thorough thought behind those "mistakes" too to justify them.
That 's why my colleague gave me that compliment! Thank you BNR.
6. "Your focus is unwavering, when you make up your mind, nothing stands in your way", this one is from one of my cousins.
7. "You are the real definition of great mental strength" . One of my classmates said that.
8. " You are the female version of Leonardo da Vinci", an artist gave this compliment.
9. Dr. Krishna's work is taking peoples' minds from irrationality to rationality, distress to strength, fear to confidence, hopelessness to success, falsehood to truth, and darkness to light : The person who nominated me for the National Awards.
10. The best compliment? The National Award 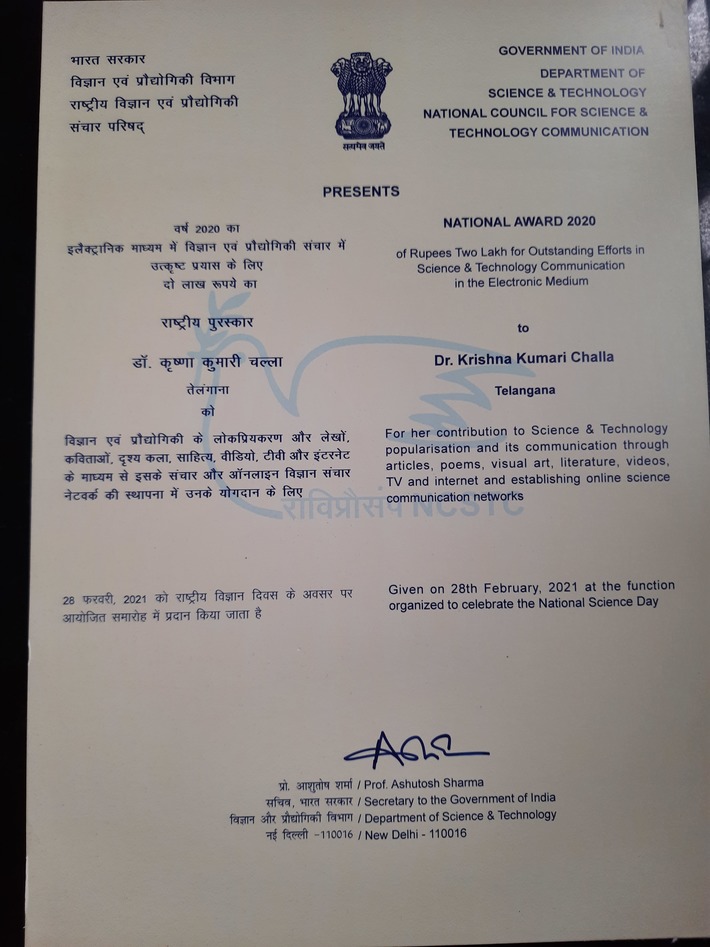 Each time I get a compliment, I think a lot about it. The thought process goes like this:
Do I really deserve this compliment? Am I really all that people say I am?
Does the person really mean it? Do my mentality and personality really match  these praises?
How can I sustain my best qualities throughout my life under all situations and circumstances and improve myself more and more?
Each moment of relishing a compliment is an opportunity to learn, understand and improve!
Q: Do compliments make you happy?
Krishna: Not always. Sometimes I feel very embarrassed if they are about my figure or appearance.
The above mentioned ones made me relish them though.
I must also add that although I can understand the intention and meaning of it, I don't like being compared with either Einstein or da Vinci or any other man or woman. I am Krishna, and let me be Krishna alone.
Q: Do you give compliments to others?
Krishna: Very rarely. :)
I should genuinely get impressed with something or somebody to compliment . I will not shower compliments  on others just like that like some people do.
So if you get a compliment from me, it comes from the bottom of my heart and will always be a fact!