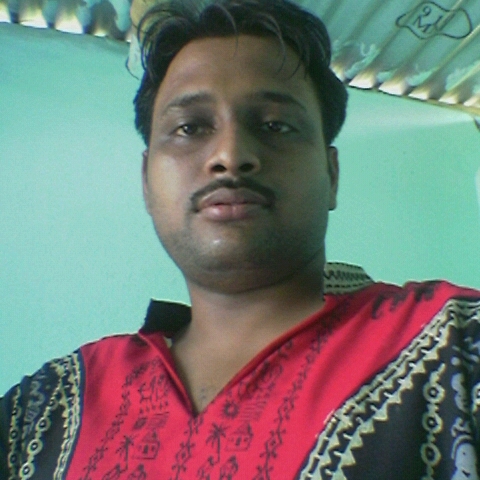 ANIRBAN SETH has not received any gifts yet

Are you genuinely interested in joining this network and consider being very active? We have very limited space here.
YES

"Over the years, leather has found many functional uses, as well as decorative use in traditional crafts. Painting, stamping, and stenciling have been popular techniques used to embellish leather. Leather puppetry is an ancient folk art in our country, having its origins in Andhra Pradesh.

The traditional puppets and the more contemporary products such as lampshades, toys and other items are vibrantly colourful with intricate detailing. Hide from cattle such as camel, goat and sheep is treated and painted upon in a highly labour-intensive process.

Kolkata based artist Anirban Seth paints on leather to create series on landscapes, still life and so on. Having studied fine arts, Anirban began exploring various avenues as an outlet for his creativity. Experimenting with leather for several years, he found creative satisfaction in this difficult and challenging medium.

He treats leather as a canvas and paints on it using various techniques - the results are aesthetic and visually pleasing. He says, ‘what fascinates me about this process is the accidental effects that are introduced using this technique. Also, there is ample opportunity to experiment with textures. He likes to use a lot of folk motifs in his paintings.

By using resist technique like Batik, stenciling, embossing and creating relief effects, he creates interesting textures and effects. Sometimes, he uses gold and silver foil to enhance the paintings. Through constant experimentation, Anirban hopes to work witha leather as well."

"An exhibition mounted by the gallery names-An.Art currently showcases works of Anirban Seth, who in the span of a few years has carved out a niche for himself by fusing technology with aesthetics. With an admirable grasp of the power of rhythm and decorative patterns, the young artist has projected leather painting as a special field of visual art, forging a link with the artists of the post-cave dwellers’ era when paper was yet to be invented.

Painting on well-tanned Seth has been able to draw the at Sheep or camel leather, tension of art enthusiasts across the country by dint of the originality which allows him to ex-press emotional nuances through the texture obtained, The preparation of leather as pictorial surface, he tells us, is not only time-consuming and laborious, but also permits the artist to work only in the humidity-free winter months. The flowers-and-vase series in the current offerings shows the plastic quality of Seth’s art."

o 2005 - Invited : ‘Names- AN. Art’ (New Name- ‘Gallery Kolkata’ ) Organized an exhibition of paintings on “Leather” by ANIRBAN SETH , inaugurated by Shri Sunil Gangopadhyay ( Eminent Poet & Novelist )on May 17 to May28, Kolkata.

• 2007 - Invited : Gallery Yapanchitra & The Eye Within presents - an exhibition of paintings entitled “Puja” from 6-18 Nov.

• 2007 - Exposure {A Group of Painters } presents an exhibitions of paintings & sculpture, Inaugurated by Eminent Writer Taslima Nasren at Academy of Fine Arts [Central Gallery] on 27th June to 3rd July .