PARIS: She's six centimetres tall, with breasts that make Dolly Parton look flat-chested – and, at more than 35,000 years of age, she could be the oldest piece of figurative art ever found.

The tiny figure, carved by Stone Age tool on a piece of mammoth tusk, may sweep away our understanding of the origins of art, according to a paper in today’s Nature.

Dubbed the "Venus of the Hohle Fels," after a cave at Schelklingen in the Swabian Jura of southwestern Germany where it was found, the carving is around 32,000 years old, according to carbon-dating measurements.

Carbon-dating of remains beyond 30,000 years ago of age usually turns out to be an under-estimate, which suggests the "Venus" is at least 35,000 years old, according to archaeologist Nicholas Conard, a professor at Germany's University of Tuebingen. "It is... perhaps the earliest example of figurative art worldwide," he said.

Sites in southern Africa have yielded abstract paintings dating to around 75,000 years ago, but until now the earliest known art depicting a person, animal or object dates from around 30,000 to 35,000 years ago.

The carving has broad shoulders, a flat stomach and outsized breasts and vaginal labia, which suggests it may once have been a fertility icon.

Instead of a head, there is a small, carefully-carved ring above the shoulders. The figure's left arm and shoulder are missing but may be recovered as the excavation widens, said Conard.

"There can be no doubt that the depiction of oversized breasts, accentuated buttocks and genitalia result from the deliberate exaggeration of the sexual features of the figurine," the paper said.

The figurine will radically change perceptions as to how Palaeolithic – Stone Age – art developed and points to the region of the upper Danube as a hotspot for innovative art, he said. Sifting through the cave floor, the archaeologists found an array of other carved bones, from reindeer, horses and bears and other animals.

There is no consensus over what is the earliest example of figurative art.

Human and animal carvings also found in German caves have been dated to between 30,000 and 35,000 years ago, while cave paintings at Chauvet, in southern France's Ardeche region, are believed to have been made around 31,0000 years ago.

Venuses from La Gravette, in the Dordogne region of southwestern France, which had a vibrant stone-carving industry, date from as far back as 30,000 years ago, according to Conard. 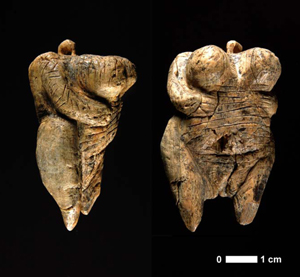