As I am particularly interested in partnerships and collaborations in Art, Science and Technology, it seems particularly appropriate to recall that TODAY, JUNE 23rd 2012, marks the centenary of the birth of this most remarkable man.

Most of us are probably not aware, as we type away on our PCs, that ALAN TURING was the man behind the “Turing Machine”, which could simulate the logic of computer algorithms, a process that lies at the heart of so many computation marvels that we use today and every day.

During the Second World War, at Britain's code-breaking centre in Bletchley Park, Alan Turing played a key role as head of the team that developed a method to break German ciphers. This device, known as the “Bombe”, was an electromechanical machine that could find settings for their Enigma machine, used for the encryption and decryption of secret messages between HQs and battlefield commanders. As head of the team in Hut 8, Alan Turing’s genius arguably saved many hundreds of thousands of lives and shortened this terrible conflict by up to two years.

To read more about this most remarkable man, here is the link to his (English) Wikipedia page :

But his end was very tragic. For he dared to have certain oh-so-human feelings that were not in tune with the mores of his day. Finally, Alan Turing was driven to a terrible despair and early death, aged only 41, by the nation he'd done so much to save.

Attempts have been made to right the terrible wrong that was done to him, and in one of his more noble acts as Prime Minister, Gordon Brown released a statement on 10 September 2009, apologising on behalf of the British Government for the “appalling” way Alan Turing had been treated.

In December 2011, an e-petition was created, requesting the current British Government to pardon Alan Turing for his conviction in 1952 of "gross-indecency", as Gay relations between men were then considered to be. But in spite of receiving well over 34 000 signatures, the British Ministry of Justice continues to decline the petition.

It can be seen and signed online here :

Alan Turing was cremated at Woking Crematorium on 12 June 1954. His Epitaph reads :

Rolling for aye through Space and Time

This world will never understand a genius. Because, it is made up of mostly morons who are completely out of tune with knowledge and excellence!

A tribute to Turing, the father of modern computing - from google

“The past is a foreign country—they do things differently there.” It’s a saying that rings especially true in the world of technology. But while innovating requires us to focus on the future, there are times when it’s important to look back. Today—the 100th anniversary of Alan Turing’s birth—is one such moment.

Turing’s life was one of astounding highs and devastating lows. While his wartime codebreaking saved thousands of lives, his own life was destroyed when he was convicted for homosexuality. But the tragedy of his story should not overshadow his legacy. Turing’s insight laid the foundations of the computer age. It’s no exaggeration to say he’s a founding father of every computer and Internet company today.

Turing’s breakthrough came in 1936 with the publication of his seminal paper “On Computable Numbers” (PDF). This introduced two key concepts, “algorithms” and “computing machines”—commonplace terms today, but truly revolutionary in the 1930’s:

Algorithms are, in simplest terms, step-by-step instructions for carrying out a mathematical calculation. This is where it all started for programming since, at its core, all software is a collection of algorithms.
A computing machine—today better known as a Turing machine—was the hypothetical device that Turing dreamed up to run his algorithms. In the 1930’s, a “computer” was what you called a person who did calculations—it was a profession, not an object. Turing’s paper provided the blueprint for building a machine that could do any computation that a person could, marking the first step towards the modern notion of a computer.

Considering the role computers now play in everyday life, it’s clear Turing’s inventions rank among the most important intellectual breakthroughs of the 20th century. In the evolution of computing, all paths trace back to Turing. That’s why Turing is a hero to so many Google engineers, and why we’re so proud to help commemorate and preserve his legacy.

In 2010, Google helped Bletchley Park raise funds to purchase Turing’s papers so they could be preserved for public display in their museum. More recently, we’ve been working closely with curators at London’s Science Museum to help put on a stunning new exhibition “Codebreaker - Alan Turing’s Life and Legacy.” This tells the story of Turing’s vast achievements in a profoundly moving and personal way, through an amazing collection of artifacts—including items loaned by GCHQ, the U.K. government intelligence agency, never before on public display. Topics addressed include Turing’s early years, his code-breaking at Bletchley Park, his designs for the Pilot Ace computer, his later morphogenesis work, as well as his sexuality and death. The exhibition opened on June 21 and is well worth a visit if you’re passing through London in the next year.

And finally, we couldn’t let such a momentous occasion pass without a doodle. We thought the most fitting way of paying tribute to Turing’s incredible life and work would be to simulate the theoretical “Turing machine” he proposed in a mathematical paper. Visit the homepage today— we invite you to try your hand at programming it. If you get it the first time, try again... it gets harder!

Turing was born into a world that was very different, culturally and technologically, from ours—but his contribution has never been more significant. I hope you’ll join me today in paying tribute to Alan Turing, the forefather of modern computing.

Thank you Mr. Marshal-M. There is very interesting BBC program about extraordinary men: "Dangerous Knowledge". In part 2 you will find Turings story. Whole program is inspiring. 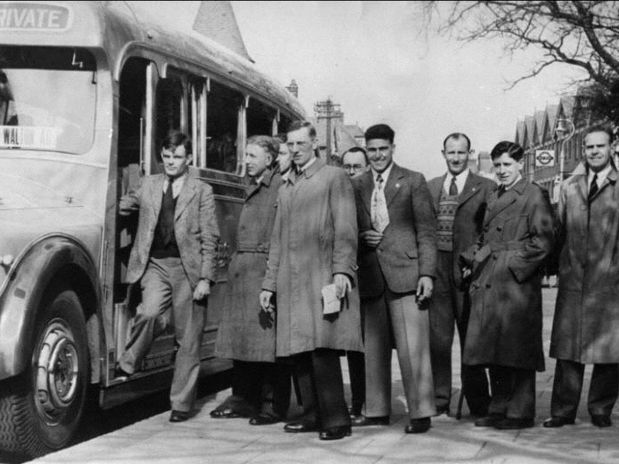 Homage British mathematician Alan Turing "on the door of the bus"

Alan Turing was a visionary without whom this modern world of iPhone, smartphones and Facebook might not have become reality. Born June 23, 1912, its centennial is being celebrated all over the world not only Saturday but throughout this year.
Turing formalized the concept of algorithm and computation - with the Turing machine - and is therefore considered the 'father' of modern computing. He also wrote what may be considered the first computer chess program and has devoted himself to chemistry, physics and biology.

Prejudice, death and a public apology
Turing was brilliant, but he was gay - at a time when it was illegal, persecuted and considered a disease in England. He was indicted, humiliated, and not to be arrested, he had to undergo the 'treatment with injections of female hormone. Shortly prior to 42 years, Alan Turing died from ingesting cyanide - suicide, although Turing's mother has argued that the death was 'accidental'.
In September 2009, after an Internet campaign that raised thousands of supporters, the then British Prime Minister Gordon Brown called for public apology on behalf of the UK government, the shameful treatment given to Alan Turing.

Regarding his "suicide", there is an interesting article on the BBC website about this by Roland Pease of the BBC Radio Science Unit - The link to it is here :

Also there is a wonderful programme saved on the ABC Radio National Science Show page that you can either listen to or download at this link here :

Many people who knew him contribute to the programme and very much bring alive what an amazing and fascinating genius this remarkable man was, and how much our contemporary world owes to him...

Thank you for sharing.

I totaly agree with you.. i have been taken out of some goups due to soem not understanding what i have been writting about

(Translation: Since no citizen of Great Britain can not sign the petition .... I'm sorry ..)

I'm sorry you can't sign the petition - I didn't realise you had to be an English citizen to sign it - But thank you for your interest anyway - best wishes...