Inserting space in one of minimalist compositions composed by Dan Flavin

I read with interest your article Dr. Krishna relative to the science-art,

where you quote the great creators of culture.

Albert Einstein’s quote — “the greatest scientists are artists as well”.

Creativity is allowing yourself to make mistakes.   Art is knowing which ones to keep – Scott Adams

And I believe that scientists are generally art lovers to compensate

through affection the severe rational sequences, required by their work.

Descriptions about scientific discoveries causes emotions, especially at the specialists in the field.

Are remarkable the emotions felt by researchers in science when they reached targets.

observed, lighting effects which have led to the discovery of radium

Or the powerful emotions that Galileo had them when

My more modest position I try to present something that could

contribute to what would define a science-art continuum

"Minimal art is a current of contemporary art initiated in the sixties in the United States. In painting, two or three colours are generally used, the same as basic forms: circles, squares, straight lines, a.s.o.
Simplicity is primordial and there is no subjective representation in minimalism; it is devoid of any symbols and plays only on forms and colours, avoiding emotion in a literal sense: an art devoid of any subjective and objective feelings". (Wikipedia) 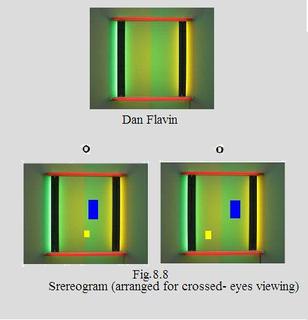 There are some peculiarities as concerns the application of bioptical modalities to well-known compositions of fine arts, the same as in the case of the theme with variations in music.

forms that occur as suggested forms of the surrounding reality.

On the other hand the current minimal art, provides that colored surfaces, not to observe cough, tending to ideal execution.

However at the normal contemplation painted surfaces are perceived as solids coatings.

In dioptical-bioptical compositions colored surfaces appear to have an increase to the finish, in that inhibit elements inherent in the structure of materials (paints),

because they do not come in pairs.

At  dioptical contemplation the surfaces are perceived as being vaporous, diaphanous.

I still want to provoke discussion about the potential benefits of applying in the fine art of stimuli that are studied in the science in the areas  Binocular rivalry;

In figure 8.8 (diopticai-bioptical composition) that I interpret the composition of Dan Flavin, introducing stereoscopic elements.

I use ordinary stereoscopic effect to the transformation the fund, obtaining a spatial color.

It can get a class of images that could be studied in terms of psychic influence. 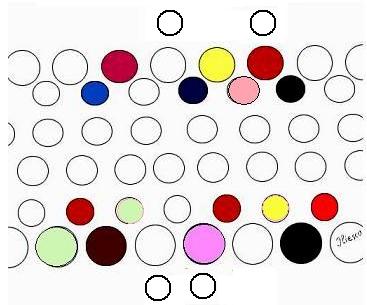 In this sketch can be observed kinetic effects caused by static stimuli ie: kinetics in deep space; flickering effect at the limit binocular-rivalry; colored fusion unstable

I associate myself to researchers that make the difference between, on the one part fine art decorative and on the other hand, the fine art of contiguous sciences.

Regarding the fine art of contiguous science I believe it is necessary to use, optical devices and other means, for research

What would have been developments in science if Galileo did not use optical telescope   that observed the moons of Jupiter (I resort to exaggerated comparison)?

Images arising from the Binocular Rivalry

are provided (the link):

They use graphical tests R. Blake

And in this case we can ask the question: at what use?

(I think the question as premature)

It could be the beginning to determine the    psychical   nfluence by fine art images?