These notions, as we know, are important chapters in psychology

are described in detail by experts in psychology.

In connection with my eperimentele which I include under

I try to explain the present dominance of sensations in contemplation.

stimulus which I introduced in experimental compositions.

I give examples of elementary stereoscopic stimulus 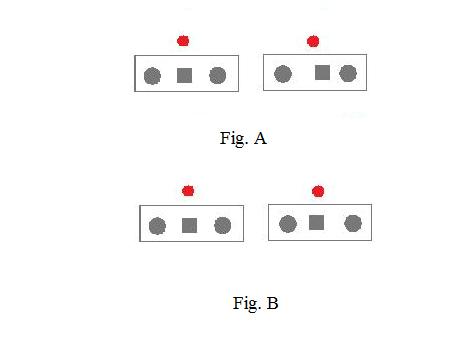 When we observe normal figures Asi B, we get the details of perception.

If we look cross-eyed, we mainly observed spatial sensations:

-in figure A, the square appears to the observer relative to the plane of the two circles

- In figure B, the square appears beyond, to the plane of the two circles

So is remarkable as the dominant the sensation of space relative to the overall perception.

In the following discussion that I'll do I'll describe and dominant sensations by applying different types of stimuli   those in the fields Binocular rivalry, Color fusion

These types of stimuli have not yet been introduced in

compositions of fine art and sensations caused in contemplation

of them could be regarded as primitive.

artist during execution  (without interleaving aleatory programs as

in the case digital execution).

examples of stimuli that cause  dominant sensation.

But the dominant sensations of traditional compositions are different, compared with

dominant sensations in the compositions (DBA).

It is interesting to study the influence of these types of sensations in visual psychotherapy.

I repeat in attach form how cross-eyed look.

An argumentum a contrario by Concepts in Generative Art…, posted by...

These assumptions I have not checked them. I proposed them as a result of

I mention in addition, influence the results of recent research: