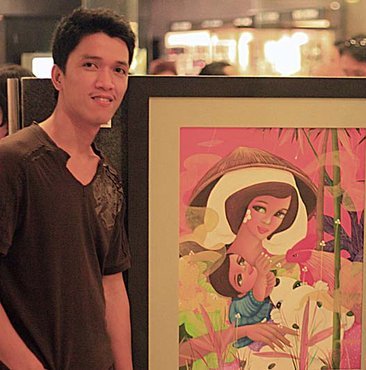 eman mediana santos has not received any gifts yet

Are you genuinely interested in joining this network and consider being very active? We have very limited space here.
uhm?

Tell us how you heard about Sci-Art Lab
internet

In what way you are associated with art/science/literature?
i am visual artist in Philippine Art Scene

Why do you want to join Sci-Art lab?
to explore my world of art

Emmanuel John Mediana Santos also known as “Eman Santos” is an artist in figurative art. Santos was born in 1978. His early training was in Architecture which he earned from Far Eastern University. He was also trained as a computer programmer at STI College and later he was schooled his final step at Philippine School of Interior Design.

At age seven, he already showed signs of artistic potentials from his young soul. While he did artworks common in his age, whether images of the typical bahay kubo and stick figures of a family, coconut trees and rice fields, his talent simply radiated.  He did a miniature of the light rail transit (LRT) complete with buildings which included the whole stretch from Monumento to Baclaran and he also did a mini visual version of the Holy Bible.

Santos began his art career as a portrait artist.  In fact, he had rendered portraits of many celebrities, politicians and other personalities.

As a decorator, among the deco projects under his name included those of clients like Speaker Jose de Venecia for his office in Dagupan City, the Batasang Pambansa clubhouse, and the design of commercial and private residences of doctors, businessmen and other personalities across the country. At present, although occasionally he would turn to his other career as a designer decorator, his passion for the visual art still rules his creative engagements. Through the years his talent continued to be refined, honed and reinvented.

He had his first one-man exhibition at the Galleria de las Islas in 2006.  His next art solo exhibitions were later mounted SM City North, SM Mall of Asia, PICC Forum Manila, and at Bellissimo Ristorante owned by Cesar Montano.

While in Europe in 2009, he did a string of group and solo shows under the Young Art Philippines Group Show which mounted in several countries like UK, Luxembourg. His solo exhibitions include: ’United in One Faith”, Chelsea Gallery, Chelsea Old Town Hall, London “Love and Emotion”, Museum of Young Art, in Vienna Austria and “One Community “Urania in Berlin. Later in October 2009, he was again exhibited his work in Vernissage which was mounted at the Wimbledon Art Gallery. He had also participated in art shows in Japan and Korea as well.

Besides his thriving art career, he is very much concerned in advocacies and community projects thru donations of paintings and free art workshops.   He was once involved with Philippine Art Central for Community Empowerment Inc. which funds among others a football team composed of street children who are being trained in the game.  Funds raised from donated art works help the team for other expenses.   In the last quarter of 2009, he was part of the Color Me Life program the L.I.F.E or Leukemic Indigents Fund Endowment, a program for children with leukemia. Likewise, Santos also was part of another art project sponsored by the ISM group and Umagang Kay Ganda for benefit of Madre de Amor Hospice Foundation, a home for the aged.   During the wake of typhoon Ondoy, he was also actively engaged in donating art works for the benefit of typhoon victims which was channeled to ABS-CBN and to the efforts of the Kunst Gallery.   He also had works donated to the Philippine embassies in London, Vienna and Berlin.

Santos is also founded the group Samahang Artist ng Iba’t -Ibang Birada  or Sanib, an art which they hope can be a venue for collaboration and exploration  among other like minded artists whom he shares the same creative passions.  As a group, they had their debut exhibit at the Manila Fame International, ART-MANILA 09, at the World Trade Center in Pasay in October, 2009.

He extends his talent to the community by teaching and helping realize the dreams of young potential artists by imparting his skills and encouraging them to pursue art.  In 2004 and 2008 respectively, he used to hold art tutorials where he taught kids and teenagers in the basics of water color, pen and ink, pastel, acrylic and oil.  Also Santos handled art workshops at the Malayang Anak ng Sining Community Theater (Masscomthea) which is under the Samahang Kabataan in Sta. Ana, Manila. Among the art workshops abroad where he was involved included those art tutorial lessons in Vienna Austria and another one with Fachklinik Kamillushaus Gmbh, an art workshop-therapy for alcoholics in Essen Germany.

In 2010, he received the Gawad Recom Award, an accolade conferred to him by the city government of Caloocan for his contribution to the community through the arts.  As an active member of the local art community, he often joins art contests. Among these are Metrobank, DAR- Department of Agrarian Reform, Star Paper/National Bookstore, Manila Yatch Club Sailboat, Philippine Star, ECCA-AAP, and GSIS where he had been shortlisted as winner, honorable and finalist in some years. In 2008, he also received one of the “Dangal ng Bayan Award” and “Global Excellence Award” by Philippine Art Central called “Artist for a Cause”.  Also in 2010 he tried to join Fine Art America’s online contest and he earned 1st place prize winner the Turning Around Award, and 2nd place prize winner the Beta Meta Award.

His works have been published in major publications like Phil-art Magazine, Philippine Daily Inquirer, Philippine Star, YES Magazine, and Department of Foreign Affairs, also was cited in one of the coffee table books by the late Manuel Duldulao.

He is an active member of the Art Association of the Philippines and Friday Group at Mga Obra   ni Nanay owned by Ms. Cristy Fermin.  He lives in Manila.

I really welcome your friendship.

My personal welcome to this wonderful site. This is a great place to network and make friends.

I would be honoured if you would kindly join my Ning Network 'Friends of Asia' too.