How scientific illiteracy can harm you...

Q: After reading your articles on post-truth  and the-science-of-politics , I am asking this question: How do people of religion, politics etc. manipulate things to make people make bad decisions on issues like climate change, GM foods etc.?

Krishna: In the scientific community, we give some examples to make general public understand how this Manipulation could be done. One of these examples is the story of Dihydrogen Monoxide Hoax.

A student wanted to test how people's opinion can be manipulated.

In 1997, a 14-year-old boy did a science-fair project around this. He surveyed 50 random people, and asked if dihydrogen monoxide should be banned.

He told them that this chemical:

Not only does Dihydrogen Monoxide have all of the negative effects listed above, it has so many more harms.

The majority of people who had consumed Dihydrogen Monoxide had been found dead at some point.

A resounding 47/50 people the student surveyed  after telling them these 'differently told truths' said that it should be banned totally!

2 people were undecided, and 1 was a strong supporter of dihydrogen monoxide.

Now...get ready for the twist in the tale...

Obviously, water should be banned, according to 94% of the population, the student surveyed.

Why did they think so? Because the student tried to trick them into believing that water is harmful. Please go through once again what the student had told about water to manipulate their minds. Each point is correct in 'certain conditions' but not that relevant in our right use of water daily!

The dihydrogen monoxide hoax involves calling water by the unfamiliar chemical name "dihydrogen monoxide" (DHMO), and listing some of water's effects in an alarming manner, such as the fact that it accelerates corrosion and can cause suffocation. The hoax often calls for dihydrogen monoxide to be regulated, labeled as hazardous, or banned. It illustrates how the lack of scientific literacy and an exaggerated analysis can lead to misplaced fears in the scientifically illiterates.

That is what happens if you are not aware of scientific facts. People can manipulate your mind in any way they want and that is what politicians and people of religion in certain countries are trying to do.

In the late 1990s when a 14-year-old student, Nathan Zohner, collected anti-DHMO petitions for a science project about gullibility (1). The story has since been used in science education to encourage critical thinking and avoid the appeal to nature fallacy ( is an argument or rhetorical tactic  in which it is proposed that "a thing is good because it is 'natural', or bad because it is 'unnatural' .

We, the science communicators, are fighting a tough battle to make general public realize this.

(ii) are better equipped to  take advantage of ideas that may improve their quality of life, and

(iii)  are able to recognize frauds effectively and avoid harm associated with them.

After reading this article people asked me to give more examples. So here are some...

Q:Your article "How scientific illiteracy can harm you" gives a good picture of our state of mind. Can you give more examples to convince more people?

Krishna: Sure. People 'mistake' one medical condition for another one. One person had a severe kidney malfunction. His feet were swollen. When I asked him to visit a doctor immediately after seeing his symptoms,   he said, ' No need to visit a doctor. Last night I was sitting at my desk the whole night. That's why my feet look like this. Today I would go to bed early, the swelling will disappear by tomorrow morning!"  And when it didn't, I had to convince him a lot to go to a hospital and when he finally did, his condition required immediate dialysis as he had a severe kidney malfunction.

Another one had a heart problem. As he has asthma too, he  didn't take his 'breathlessness' seriously. Again I had to goad him to see a heart specialist after noticing his symptoms which told me he had more than 'mere asthma' when they didn't respond to regular-using inhalers and nebulizers.  My hunch was correct. He had pericardial effusion and the resultant irregular heart beats.

There are some other real life  stories that tell you why science knowledge is important in other areas. Like this one... 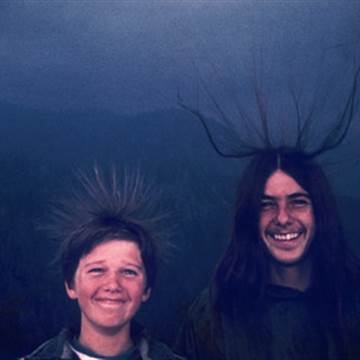 DO you know why the hair on these boys' heads raised like that and  is standing like grass growing on Earth?

Because they are about to be stricken by lightening! Science tells us it’s then best to crouch down with your shoes  touching the ground, but a bad idea to lie flat on the ground.

Here is the position the Boy Scouts of America teaches boys to use when in this situation. 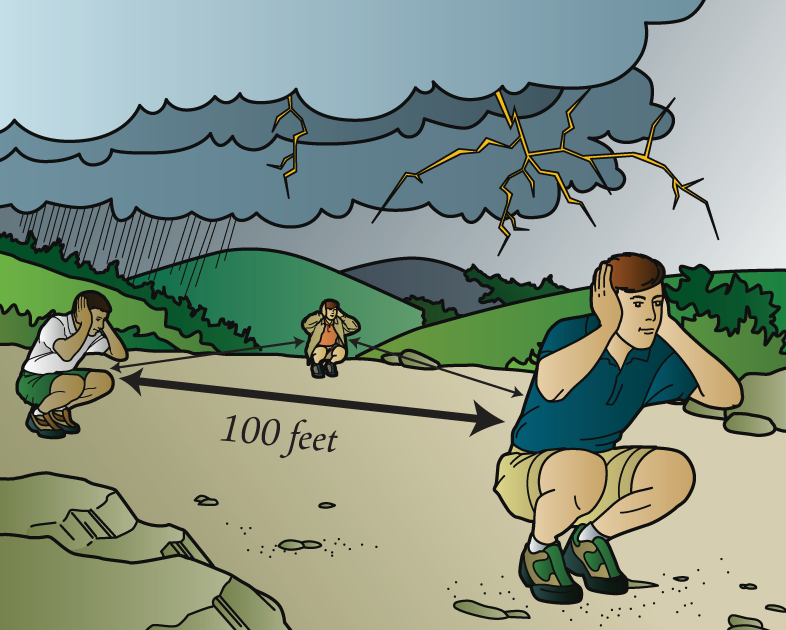 Understanding science can save your life. Failing to can kill you.

If a lightning storm catches your group in the open, spread out so that people are at least 100 feet from one another. Further limit your risk by crouching low with only the soles of your shoes touching the ground, and take off your hat if it has any metal parts. You can also use your sleeping pad for insulation by folding it and crouching upon it.

Why does your hair raise and warn you before lightening strikes you? Your hair is responding to the electrical potential difference that has occurred between the Earth and the clouds. The earth (which you are standing on) is positively charged and the cloud base becomes negatively charged. Once the potential difference is large enough nature will seek to equalize the imbalance and a large flow of electrons occurs...lightning. You can simulate this by taking a plastic comb and rubbing it on a wool sweater. Which gives it a charge. Then pass the comb near your hair. You will get the same result.

Only a person who has scientific knowledge knows these things and can protect himself or herself and others around. Otherwise, like the ignorant boys above who were just enjoying the fun will get burnt or even get killed!

Another example: Recently I read a story in the news papers here. According to the story a car hit an electric pole at high speed and the high tension wires fell on the car and when the people inside tried to come out of it, they got electrocuted. How can people save themselves in such situations?

In such situations usually people panic. But  car tyres are made up of rubber and will work as an insulator. The metal surface of the car acts as a Faraday cage due to which the electric field inside the car is zero. There is no need to panic.  It would be better to stay safely inside a car till help arrives. You should also make people around alert so that they don't touch the car.  If your car is still working, then slowly drive the car away from the power line until it falls off your car and you're well clear of it. If you come across a power line on the ground then stay away. It is possible to get electrocuted because the voltage fans out from the wire before going down into the ground.

If the car is not working, and when there is fire, one should not  step out of the vehicle in such cases without taking precautions, if you do so you will complete the circuit between wires and earth and you’ll be fried in no time. What is safe to do is pick up the floor mats in your car and throw them on the ground where you could reach by jumping, make sure you cover maximum area with mats, then open the car door widely ( roof top is preferable) then jump onto the mats which you placed earlier. Make sure you remove two legs at once( keeping one leg inside may complete circuit). Don’t walk over there just slide your feet like jam over bread( you need greater knowledge in physics to understand this). Make sure that you jump completely free of the vehicle with both feet together to avoid contact with the live car (metal) and the ground at the same time. Once you jump from a car with a power line on it, the danger may not be over. Electricity can spread out through the ground in a circle from any downed line. Hop as far away as possible from the vehicle keeping both feet together. Do not try to help someone else from the car while you are standing on the ground. If you do, you will become a path for electricity and could be hurt or killed!

If you are wearing  boots that act as insulators, that would really help!

The difficulty in actually  implementing this safe procedure successfully can be surpassed only when  one has complete knowledge of physics, electricity and bio-mechanics. Hmmm! So learn these things! Science helps you. Sure it does. But only if you make it your pal!

These are life and death situations. Scientific illiteracy can kill you sometimes.

Here is another real story:  A few days back it was reported in the media here that an illiterate relative of a patient was asked to carry an oxygen cylinder along with the patient into an MRI chamber by an illiterate ward boy. This resulted in the death of the relative as the iron oxygen cylinder he was carrying was sucked into the MRI machine with such speed that hit him on the head so severely that he was killed instantly. A scientific literate would have definitely avoided such a mishap!

This 's also a real story told by a resident doctor recently...

Most people in India don't donate blood thinking it leads to perpetual weakness!

So In India, if someone needs blood from blood bank, the protocol in a government hospital is that someone from the side of person requesting blood needs to donate blood (a relative or a friend).

A pregnant female brought to our hospital recently required blood because her haemoglobin was less than 7g/dl.

The obvious choice in such cases is husband. But he refused point blank.

The reason - he had sex yesterday with her. If he donates blood - it will cause even more weakness that he won't be able to do it again ever!

This is the state of mind most people are in not only in our country but in several parts of the world.

That is why we stress on science education.