How to identify Carbide -Ripened bananas and other fruits

People are worried. We get Calcium Carbide ripened bananas and other fruits despite the court's order and ban by FSSAI. Vendors are simply ignoring the court-ruling and are making money while people suffer.

Only way to come out of this is to get educated. And people are turning to me for help. Yes, several people asked me to tell them how they could identify artificially ripened bananas.

Okay, here is my 'how to identify artificially ripened fruits' discourse ....

Pouches of calcium carbide are placed with these fruits. When this chemical comes in contact with moisture, acetylene gas is produced, the effects of which are similar to ethylene, the one that is naturally used for fruit ripening process.

The early symptoms of such poisoning are vomiting, cough, diarrhea with or without blood, thirst, difficulty in swallowing, ulcer, burning sensation in chest and abdomen, irritation or burning in eyes and skin, sore throats and shortness of breath. Later it causes dizziness, sleepiness, mental confusion and memory distortion, calcium carbide is known to affect the neurological system. The traces of arsenic and phosphorous hydride cause additional damage to the hormonal functioning.

Calcium Carbide
When Calcium Carbide comes in contact with moisture present in fruits, it releases acetylene gas. This gas is similar to ethylene gas produced by naturally ripening fruits. It triggers fast ripening of bananas. Ripening using this process is not usually harmful. However, it is the traces of toxic arsenic and phosphorous left behind on fruits by this chemical that is harmful to human health. The symptoms of arsenic or phosphorous poisoning include vomiting, diarrhea, burning sensation of chest and abdomen, weakness, irritation skin, ulcers on the skin, sore throat, cough and shortness of breath.

Ethephon one
It also releases ethylene gas to trick fruits into ripening fast. It is not very harmful unless used in large amounts.

Ethylene gas
Although ethylene is produced by fruits for natural ripening, its artificial use may make the fruit lack flavor. It, however, does not lack nutritional value. Also, excess use of ethylene gas on fruits is an unhealthy practice.

How to avoid this poisoning? Learn how to identify artificially ripened fruits.

The fruit quality falls substantially with the use of calcium carbide; the fruit is overly soft, lacks the natural sweetness that otherwise it might have and rot quicker than the natural pace. Since the quantity of calcium carbide depends on how raw the product is, the level of toxicity increases considerably.

You bought green bananas from the supermarket, and they turned bright yellow after a few hours. And later within a day, black blotches appeared on the banana peel. This is an indication of chemical ripening.

Now compare  the two pictures below ... 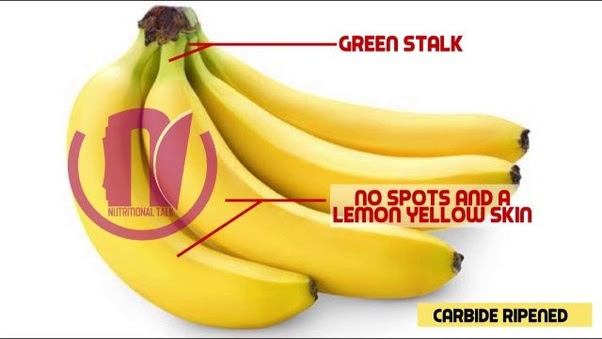 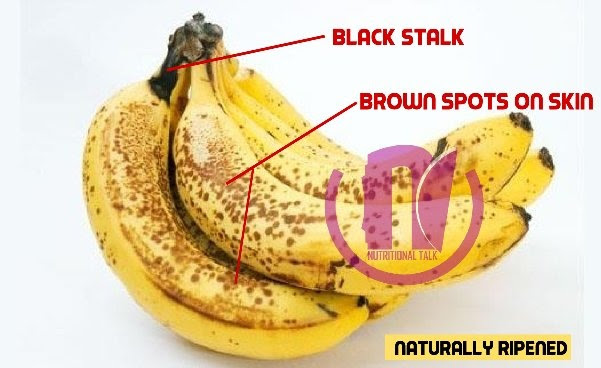 Appearance and taste
Naturally ripened bananas have black or brown stalk and have a sweet taste. The skin of it appears dark yellow with black and brown spots spread unevenly all over.

When it is artificially ripened that conversion of starch to sugar is not complete and as a result, the taste is not sweet. You wouldn’t get the natural fruit taste.

Touch & Feel
For artificially ripened bananas, Some parts of the fruit will be very soft while others would be hard. This is because some parts come in contact with chemicals while others may not.

Always inspect the stem, if it is green in color while the fruit is yellow it’s a sure shot sign of artificially ripened fruit.

Also, look for unevenly spread brown spots on the banana peel. This is a sign of naturally ripened fruit.

Simply, place the fruit in the water, naturally ripened fruit will sink to the bottom while those ripened artificially will float because the fruit is immature.

Here's a simple method to check if the mangoes have been artificially ripened or not.

The softness of the fruit is very uneven.

The other methods to identify ripening use chemical techniques, and for those, it is best to get the fruits tested by an NABL Certified Laboratory. They can analyse and put forth the presence and the levels of contamination, with not one but all of chemicals used in the ripening process.

Here are some more ways to identify chemically ripened mangoes-

In an artificially ripened mango,  the skin will have a uniform bright yellow colour. In naturally ripened mangoes, yellow and green areas blend gradually, as the skin changes color naturally during the ripening process, which is why they will not be uniformly yellow.

When you cut open a naturally ripened mango the pulp will a bright reddish-yellow, which is uniform. In the case of an artificially ripened mango it will be a light and dark yellow, indicating that it is not fully ripe. The comparison lies in the fact that the mango will look completely ripe from the outside but it will not be so on the inside. 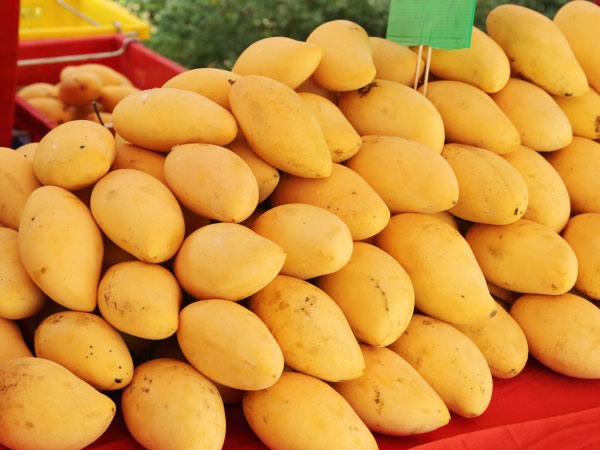 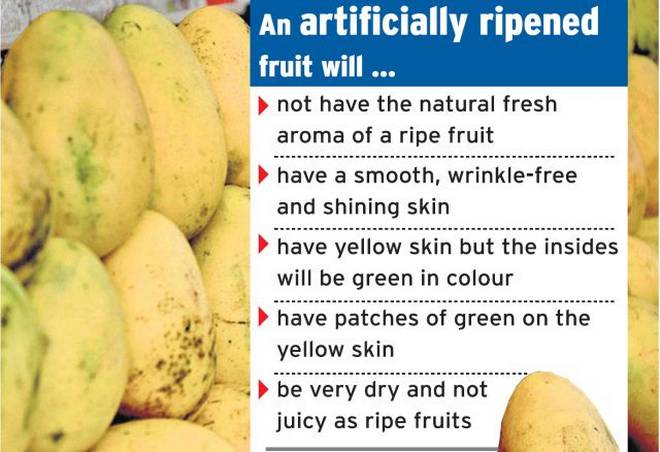 Naturally ripened mangoes will have a sweet taste.

3. No juice may mean it is artificial

The aroma is milder in artificially ripened ones and sometimes you don't get any smell of the mango juice at all!

Whenever I buy chikoos or sapotas, I look for  these things...

Artificially ripened ones don't have a uniform texture. They feel soft at one place and hard at another place. Also they the colour changes from one spot to another. They smell strange with a chemical tinge.

Watch this video to realize how they are artificially ripening jack fruits...

Watermelons will be injected with bright red coloured dye if they are artificially ripened because they won't be very red. Artificially ripened ones will have a uniform colour and black patches. See the picture below to identify them... Erythrosine-B or Red-3, a cherry-pink synthetic, is commonly used to give watermelon pulp a bright red colour.

Erythrosine-B contains iodine and sodium. Thyroid malfunction is one of the possible harmful effects of consuming this compound.

Lead chromate can cause skin allergies and damage the nervous system.

Its exposure can also lead to kidney and brain damage, and anemia.

Sudan red is a carcinogenic compound and is harmful for the stomach.

The best way to avoid such harmful fruits is to consume them only during the season in which they are cultivated.

Avoid shiny apples. Most apples that you see in the market have wax coating.

It is also used to increase the shelf life of the fruit, which means the apple that you ate last could have been more than a year old.

Although experts suggest that wax is not harmful in itself, the worrying fact is that it is usually applied before the pesticide is removed from the surface of the fruit.

So even if you wash the apples, the pesticides will not be removed. The wax also alters the taste of the apple.

The solution is to rinse apples with vinegar and remove its skin before consumption.

Avoid shiny grapes too. In case you had grapes, toxic benzene hexa chloride or BHC, a non-water soluble pesticide, could have caused it.

BHC remains on the fruit skin even after it’s washed. Exposure to BHC in mild doses can cause vomiting and muscular pain.

These days, BHC is often used beyond the permissible limits in grapes.

Sometimes calcium carbide or wax, like in apples, is also used to ripen the fruit.

A prolonged exposure to BHC can adversely affect the functioning of the liver.

If grapes appear to have an extra shine, it means the fruit has been coated with wax.

Experts suggest that grapes should be rinsed with a mix of salt and baking soda, and then with water before consumption.

Why do vendors do this harm to us? According to the sellers I spoke to,  if the fruits are brought in ripe form from far away places, they will be rotten by the time they reach the consu­mer. Nobody would buy them. Also if they allow the fruits to ripe on trees, birds, insects and other pests will consume them leaving nothing.
The authorities allow the use of ethylene, a gas naturally produced by fruit in closed chambers to ripen fruits. Unfortunately, fruitsellers are not doing that because it involves extra expenditure. Calcium carbide, on the other hand, comes for as little as Rs 25-30 per kilo and can ripen 10 tonnes of fruits overnight.
The effects of the usage of calcium carbide, low-grade petroleum wax and fruit hormone injections like Ethephon are extremely dangerous. Fruit sellers are constantly coming up with newer methods to ripen and preserve fruits while bypassing the law. Authorities are unable to control them.

So we will have to take care of our health ourselves.

Avoid fruits that have these markers of artificial ripened ones.

Wash fruits thoroughly before consuming. Keep under running water for a few minutes to wash the chemicals away.

And bring awareness among people.

Finally put pressure on authorities to check this menace.