Saving Tigers from extinction is still a travail!

We, here,  adore Tigers. They are beautiful creatures of Nature and have very significant roles in our ecosystems. Therefore, protecting them and saving them from extinction is an important job.

The tiger is the largest member of the felid (cat) family. They sport long, thick yellow-reddish coats with white bellies and white and black tails. Their heads, bodies, tails and limbs have narrow black, brown or gray stripes. There were once nine subspecies of tigers: Bengal, Siberian, Indochinese, South Chinese, Sumatran, Malayan, Caspian, Javan and Bali. Of these, the last three are extinct, one is extinct in the wild, and the rest are endangered.

In the early 1900s, there were around 100,000 tigers throughout their range. Today, an estimated total of around 3,890 exist in the wild. Below is a breakdown of tiger numbers by subspecies.

If you look at the list above you will notice that some of the subspecies have already become extinct. A tragedy indeed. We really are very concerned.

I joined various "Save the Tiger" projects and did a little bit of work in this regard. Created art works ( two of them are added below) for the messages to reach the target people. 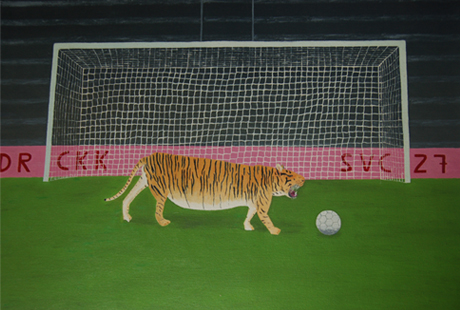 Why is the Royal Bengal Tiger visiting the Football stadium? To play football? “No”, is the answer. Then why is it here? Let us hear the answer from the mouth of the tiger itself.

“Hello, Homo sapiens, are you scared to see me here? You are, I am pretty sure. That is why you ran away. But why am I here?

I am here in search of a safe home. Because, men, you destroyed my home, killed my family members and friends. In desperation we – me and some of my friends – ran away. We went to your homes, stole your cattle because we were hungry. But you weren’t bothered. Seriously watching cricket and football matches. We destroyed your crops, attacked your friends. Still you were enjoying Chelsea meeting Manchester United. Our members here are dwindling and we are on the brink of extinction. But, we want to live. We want help. We need a safe home. So I thought a football stadium is the best place to attract your attention. Because, as long as I am in the stadium, people will notice me and my plight, and I came here as a last resort. So, man, give me back my home and family. Then only I will leave this place. Till then I’ll make the football stadium my home. Any objection? ”

So, I painted the picture of a Tiger In a football stadium!

When one of my friends in the US asked me to send one of my art works, I painted and sent him  a Tiger asking him to donate some money  for Tiger conservation and he obliged! 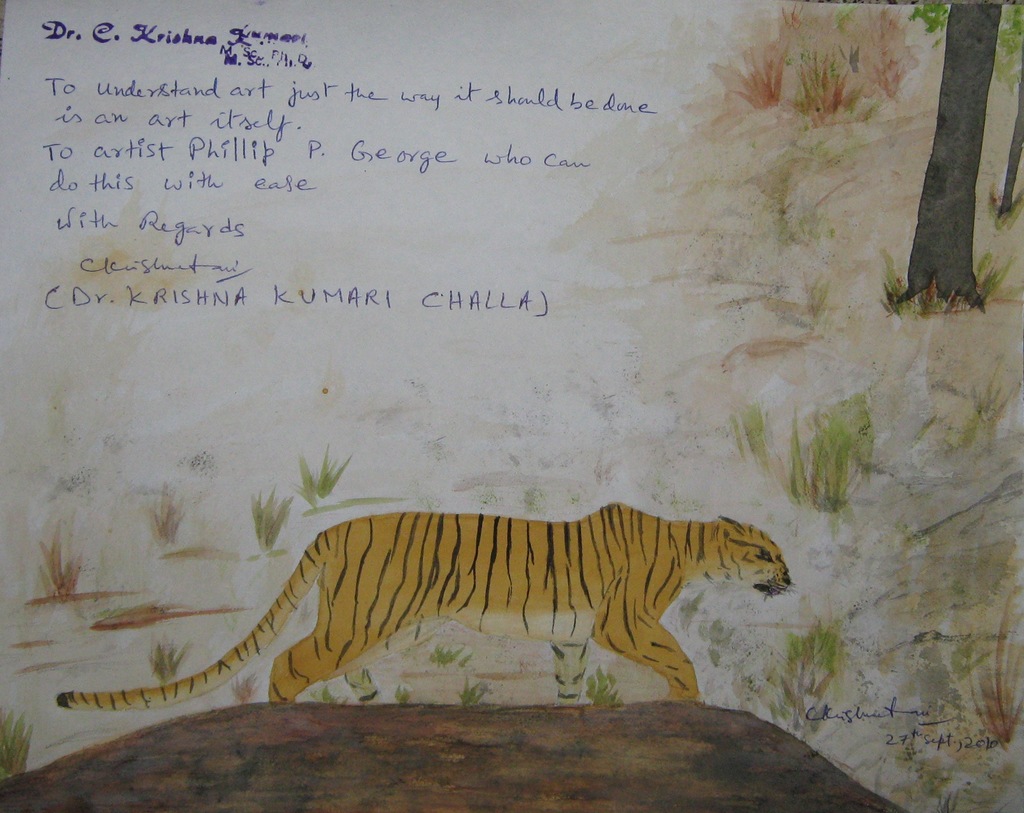 And we urge people to do their bit.

"What can we do?" several people ask. Quite a lot. It is because of passionate people and their un-relenting work, the Tigers are still surviving. Despite poachers, habitat destruction, we are able to still see these magnificent creatures in the wild because of a few people's determination to save them.  This week we have seen how their efforts are reaching the threshold of success.

But still we have to fight some of these threats:

The main one is poaching. Because of the demand for Tiger body parts ( like bones, skins, claws, whiskers) in China and Vietnam, and for their skins, 'head trophies' and nails in other parts of the world, Tigers are still being hunted and killed. There is a million dollar business based on Tiger body parts mainly thriving in China.

The second important threat is habitat loss. Tigers need lots of space to live, hunt and flourish. If we destroy their natural homes, they come to ours in search of food. When there is a clash  between Tigers and human beings, naturally both try to kill each other. And most of the time human beings are winning resulting in the loss of Tiger population.

Climate change has its effect on Tiger survival too. Sunderbans, for example, which is one of the world’s largest tiger populated regions - where a large mangrove forest area shared by India and Bangladesh on the northern coast of the Indian Ocean - harbours Bengal tigers and protects coastal regions from storm surges and wind damage. However, rising sea levels caused by climate change threaten to wipe out these forests and the last remaining habitat of this tiger population. According to some studies, without strong efforts, projected sea level rise—about a foot by 2070—could destroy nearly the entire Sundarbans tiger habitat.

Using tigers as pets by the uber rich, celebrities and for circus stunts is a big concern too. You will be surprised to learn that there are an estimated 5,000 captive tigers in America! That’s more than all wild tigers across Asia. Almost 95 percent are privately owned, often by people not trained to care for animals in general, let alone tigers. Alarmingly, there is no accurate record or system to determine the actual number of tigers in the country, where they are, or what happens after they die. According to WWF, in 2011 the  local authorities in Zanesvill, a Ohio (US) town were forced to shoot more than 10 captive tigers and other exotic animals after their owner let them loose into the community. This is a scenario that could easily be repeated and with severe consequences. Thousands of tigers are kept in backyards, urban apartments, and sideshows, often by those untrained in handling tigers. In some states, it is easier to buy a tiger than to adopt a dog from a local animal shelter and people can legally keep a tiger on their property without reporting it to local officials or neighbours.

After raising several alarms by the international community, the US government has recently tightened the loopholes in laws and the sale and trafficking of so-called “generic” tigers and tiger cubs will now be regulated just like other endangered species ( this will come into effect from 6th May, 2016 :ref-1)). But the concerns still remain.

The number 3890 (which denotes the surviving tigers in the wild now; however some scientists dispute this and say they are much lesser in numbers and that tiger conservation should be guided by the best possible science. Using flawed survey methodologies can lead to incorrect conclusions, an illusion of success, and slackening of conservation efforts, when in reality grave concern is called for. This is not a time for conservationists, according to them, to take their eyes off the ball and pat each other on the back) doesn't reflect a healthy figure when sub-species are taken into account. Except for Bengal Tiger, the one that can be located in the Indian subcontinent, rest of the  sub-species of Tigers are reaching alarmingly low figures. For example, The South China tiger subspecies isn’t on this list because it’s already extinct in the wild and only exists in captivity. Most of the tiger subspecies don’t have a huge amount of genetic variation to survive.

With the numbers dwindling we do need to worry about tigers’ genetic health. Wild Amur tigers in Russia—which are all descended from just 50 animals—face a potential genetic bottleneck that could, in the future, lead to defects and abnormalities.  After all, we already know it’s happened to the last South China tigers.

For the sustainability of any population, genetic variation is very important. The genotype is the genetic code of an organism. If a group of organisms (say, a population of species X) were to live in a completely stable physical and biological environment, then a relatively narrow range of phenotypes (  the expression of the genes as a living organism in a particular environment, and is influenced by environmental context at every level from the cell to the whole organism) might be optimally adapted to those conditions. Under these circumstances, Species X would benefit more by maintaining a narrow range of genotypes (the genetic code of an organism; in organisms with nucleated cells - most multi-cellular plants, animals, and fungi-, the essential code is found in the nucleus of each cell) adapted to prevailing conditions, and allele frequencies might eventually attain equilibrium. By contrast, if the environment is patchy, unpredictable over time, or includes a wide and changing variety of diseases, predators, and parasites, then subtle differences among individuals increase the probability that some individuals and not others will survive to reproduce -- i.e., the traits are "exposed to selection." Since differences among individuals are determined at least partly by genotype, population genetic theory predicts (and empirical observation confirms) that in variable environments a broader range of genetic variation (higher heterozygosity) will persist.

Traits with a genetic basis for tolerance of environmental variation are important in restoration work  and the species survival. And the Tigers, unfortunately, because of their low numbers, lack this genetic diversity  to survive!

But don't get disheartened. We can use all our knowledge and strengths to do our best to protect the remaining small number of Tigers. Do you have the will to do it?

Then, raise your voice against poaching.  Bring pressure on your local authorities to act. Stop using all tiger based products. Protect forests. Help in afforestation. Join 'Save the Tiger' projects. Donate for the cause and ask your friends too to donate. Tell circus people not to use wild animals for performing stunts. Adopt a tiger. Above all educate people.

Tigers need all your help. Respond to their SOS calls positively.

“Man-Eater of Champawat”. Heard this name before?

It was not born with a taste for human flesh. The beast, when it was still fairly young, had some sort of encounter, probably with an unsuccessful hunter, that severely damaged the cat’s mouth and caused the loss of two canine teeth. With that handicap, the Champawat tiger probably had to switch from hunting water buffalo and other large ungulates to easier-to-catch prey — humans — as a means to survive. This scenario is fairly common among man-eating big cats, experts note; we humans usually aren’t meals until a cat is somehow forced to turn us into dinner.

But to understand how the tiger racked up such an impressive number of kills — 436 deaths over some seven years — one has to consider how the landscape of Nepal and India had become less hospitable to wildlife. As the British colonized the Indian subcontinent in the 19th century, prime tiger territory was destroyed to make way for people and agriculture. The loss of habitat forced many tigers to compete for land and prey, and the Champawat tiger, with its physical disadvantages, would have been unable to prevail without turning to humans. “What becomes clear upon closer historical examination is that the Champawat was not an incident of nature gone awry,” the experts say, “it was in fact a man-made disaster.”  Finally Jim Corbett had killed the tiger, just for eating its food in pathetic conditions. What a sad end!

So, we ourselves are responsible for tigers turning into man-eaters, according to experts.  Don't blame the tigers for what they are doing. Blame the man that turned the beast into a man-eater. And stop doing things that turn these animals into man-eaters.

Together with TRAFFIC, WWF has raised the alarm on the lack of regulations on the private ownership of tigers in the US. We have called for a ban on private possession of big cats like tigers and lions. We are also asking that owners be required to register these animals.

Last year, President Obama announced a new Executive Order to Combat Wildlife Trafficking. To deliver that goal, we must commit to stricter management of captive tigers and other big cats that are targets of illegal trade. Better laws are an obvious place to start.