COVID-19 is not just a respiratory disease but an illness that can affect multiple organs.

COVID-19 is not just a respiratory disease but an illness that can affect multiple organs.

Several people, including the highly qualified ones, are thinking and saying that COVID 19 is just a respiratory disease. If I say this is not entirely true? I just said something that might make you retort. Didn't I? Okay, let me support my statement with evidence now.
First let us see what the COVID 19 symptoms reported till now are....

First thing most people notice is  loss of their sense of smell and taste.

We now understand that COVID-19 can also infect cells outside of the respiratory tract and cause a wide range of symptoms from gastrointestinal disease (diarrhoea and nausea), liver disorders (12), to heart damage ( Coronavirus disease 2019 is associated with a high inflammatory burden that can induce vascular inflammation, myocarditis, and cardiac arrhythmias) and blood clotting disorders (7,9).

Some COVID 19 patients also have gastrointestinal symptoms including diarrhoea, vomiting and abdominal pain . This is likely because SARS-CoV-2, the virus that causes COVID-19, is found in the gut as well as the respiratory tract. Importantly, the gut’s involvement in coronavirus illness points to the possibility COVID-19 could spread through faeces. At this stage we don’t know for certain whether or not that occurs – but we will have to take precautions to prevent that route if there is a chance.

We say there is a chance because we know how this virus enters human cells.

SARS-CoV-2 gains entry into human cells by latching onto protein receptors called ACE2, which are found on certain cells’ surfaces (11).

Clinicians have detected coronavirus in tissue taken from the lining of the gut (oesophagus, stomach, small bowel and rectum) through routine procedures such as endoscopy and colonoscopy, where doctors use cameras to look inside the body. They found abundant ACE2 receptors in those tissue samples.

While some researchers have proposed alternative explanations, it’s likely people with COVID-19 experience gastrointestinal symptoms because the virus directly attacks the gut tissue through ACE2 receptors.

About 10% of COVID-19 patients have heart disease, diabetes and high bloo.... Yet surprisingly, people with lung disease, such as asthma and chronic obstructive pulmonary disease (COPD) account for only 6% of severe COVID-19 cases. These statistics are similar in patient reports from China, Italy,the UK and the US.

People with existing heart disease are worse affected by COVID-19, but the virus can also affect the heart in people without heart disease.

In both cases, when there is a severe COVID-19 infection, the heart undergoes a massive inflammatory response called myocarditis. The virus infects the cells of the heart causing the muscle tissue (myocardium) to undergo severe inflammation. This can alter the electrical conduction in the heart, affecting its ability to pump blood around the body. The result of which is less oxygen getting to organs, including the lungs. How this happens is unclear, but there are several possible mechanisms (6).

It now appears that we have to add neurological symptoms to this list, too.

Several recent studies have identified the presence of neurological symptoms in COVID-19 cases. Some of these studies are case reports where symptoms are observed in individuals. Several reports have described COVID-19 patients suffering from Guillain–Barré syndrome. Guillain–Barré syndrome is a neurological disorder where the immune system responds to an infection and ends up mistakenly attacking nerve cells, resulting in muscle weakness and eventually paralysis.

These studies have shown that 36% of patients have neurological symptoms. Many of these symptoms were mild and include things like headache or dizziness that could be caused by a robust immune response. Other more specific and severe symptoms were also seen and include loss of smell or taste, muscle weakness, stroke, seizure and hallucinations.

Changes in consciousness, such as disorientation, inattention and movement disorders, were also seen in severe cases and found to persist after recovery.

SARS-CoV-2, the coronavirus that causes COVID-19, may cause neurological disorders by directly infecting the brain or as a result of the strong activation of the immune system.

Some evidence suggests SARS-CoV-2 can target tissue in the central nervous system, leading to temporary loss of some senses, as well as more serious potential consequences, including neurological impairment.

Recent studies have found the novel coronavirus in the brains of fatal cases of COVID-19. It has also been suggested that infection of olfactory neurons in the nose may enable the virus to spread from the respiratory tract to the brain. 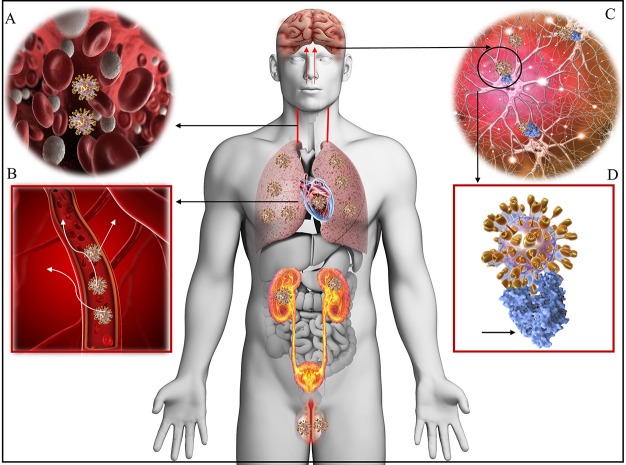 Cells in the human brain express the ACE2 protein on their surface. ACE2 is a protein involved in blood pressure regulation and is the receptor the virus uses to enter and infect cells. ACE2 is also found on endothelial cells that line blood vessels. Infection of endothelial cells may allow the virus to pass from the respiratory tract to the blood and then across the blood-brain barrier into the brain. Once in the brain, replication of the virus may cause neurological disorders.

SARS-CoV-2 infection also results in a very strong response by the immune system. This immune response may directly cause neurological disorders in the form of Guillain–Barré syndrome. But brain inflammation might also indirectly cause neurological damage, such as through brain swelling. And it’s associated with – though doesn’t necessarily cause – neurodegenerative diseases such as Alzheimer’s and Parkinson’s.

Several other unusual symptoms too have been reported (10). Like the Multi-system inflammatory syndrome, Strokes and blood clots, covid toes, Silent hypoxia, Delirium to name a few.

Renal tropism is also a potential explanation of commonly reported new clinical signs of kidney injury in patients with Covid-19 (13).

Even placentas of pregnant women are showing injuries (14).

Not all the above symptoms are because of immune or inflammatory responses.

When the SARS-CoV-2 virus enters the human body, it breaks into cells with the help of two proteins that it finds there, ACE2 and TMPRSS2. While there has been much discussion of viral infection in gut and lung cells, researchers have dug into massive gene expression datasets to show that other potential target cells also producing ACE2 and TMPRSS2 are scattered throughout the body—including in the heart, bladder, pancreas, kidney, and nose. There are even some in the eye and brain.

Receptors for corona virus in the human body

A preprint (1) says that such cells are strikingly abundant. Many are epithelial cells, which line the outer surface of organs. The new findings add to an emerging picture of SARS-CoV-2 as a virus that can target cells in many places in the human body, rather than being focused on a particular organ or part of the respiratory tract.

Another paper published in lancet shows SARS-CoV-2 infects the host using the angiotensin converting enzyme 2 (ACE2) receptor, which is expressed in several organs, including the lung, heart, kidney, and intestine. ACE2 receptors are also expressed by endothelial cells.

The brain has been reported to express ACE2 receptors that have been detected over glial cells and neurons, which makes them a potential target of COVID-19 (3).   Studies have shown the ability of SARS-CoV to cause neuronal death in mice by invading the brain via the nose close to the olfactory epithelium (4).

To uncover the locations of cells bearing ACE2 and TMPRSS2, the preprint researchers turned to the Human Cell Atlas, a project that has allowed scientists to pool together data on human cells since 2016.

By searching single-cell sequencing records of around 1.2 million individual cells from human tissue samples, the team was able to find out which of those cells produce both ACE2 and TMPRSS2, and note their locations in the body. The analysis used 16 unpublished datasets of lung and airway cells and 91 published datasets spanning a range of human organs.While the data show cells in many locations in the body produce SARS-CoV-2 receptors, it’s not certain that the virus can infect all of those tissues (8).

Expressing the receptor is a necessary condition but not necessarily a sufficient condition. For example, potential target cells were found in the testes, but scientists still don’t know if SARS-CoV-2 infects and replicates in that part of the body. Corona virus has been found in testes, though (5).

The Cell study, meanwhile, also found ACE2 and TMPRSS2 transcripts in nasal, gut, and lung cells but the researchers also found that the protein interferon activated ACE2 expression in vitro. The human body uses interferon to fight infections, so it is not clear whether the protein is of overall benefit or detriment to COVID-19 patients.

The presence of receptors for attachment in multiple organs gives us a clue that the virus has different options. Whether it is using them or not is unclear at this stage.  Studies have shown the ability of SARS-CoV to cause neuronal death in mice by invading the brain via the nose close to the olfactory epithelium.

Some evidence suggests SARS-CoV-2 can target tissue in the central nervous system, leading to temporary loss of some senses, as well as more serious potential consequences, including neurological impairment.

Therefore, the symptoms expressed in various organs of the human body in COVID 19 disease are either because of immune response and “cytokine storm” or direct attack of the virus or both. The picture is still hazy at this point of time. Co-morbidity is making the picture more  complicated.

ACE2: the molecule that helps coronavirus invade your cells

The virus can cause problems in almost every organ, including the brain, heart, kidneys, gastrointestinal tract and skin.

These symptoms sound scary, but they should be expected. Here's what scientists know about the "new" effects of the coronavirus.