A new ultra-low-power method of communication at first glance seems to violate the laws of physics. It is possible to wirelessly transmit information simply by opening and closing a switch that connects a resistor to an antenna. No need to send power to the antenna.

Our system, combined with techniques for harvesting energy from the environment, could lead to all manner of devices that transmit data, including tiny sensors and implanted medical devices, without needing batteries or other power sources. These include sensors for smart agriculture, electronics implanted in the body that never need battery changes, better contactless credit cards and maybe even new ways for satellites to communicate.

Apart from the energy needed to flip the switch, no other energy is needed to transmit the information. In our case, the switch is a transistor, an electrically controlled switch with no moving parts that consumes a minuscule amount of power.

In the simplest form of ordinary radio, a switch connects and disconnects a strong electrical signal source—perhaps an oscillator that produces a sine wave fluctuating 2 billion times per second—to the transmit antenna. When the signal source is connected, the antenna produces a radio wave, denoting a 1. When the switch is disconnected, there is no radio wave, indicating a 0.

What we showed is that a powered signal source is not needed. Instead, random thermal noise, present in all electrically conductive materials because of the heat-driven motion of electrons, can take the place of the signal driving the antenna. 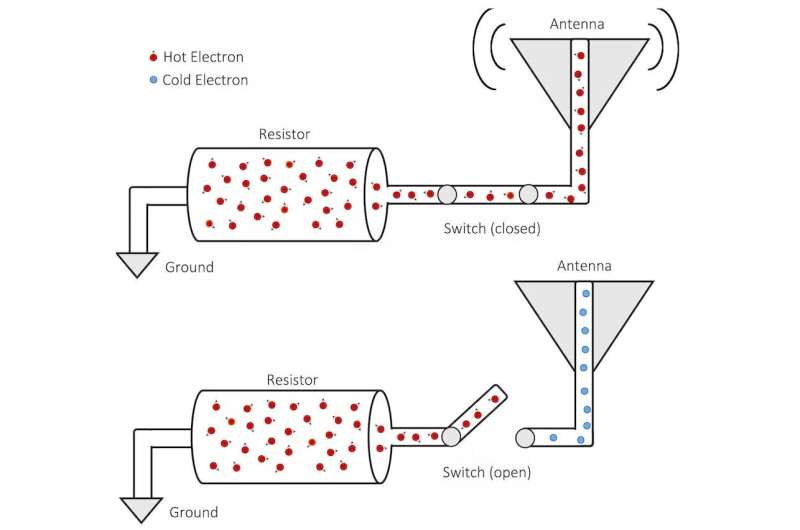 Electrons that naturally move around inside a room-temperature resistor affect electrons in a connected antenna, which causes the antenna to generate radio waves. Connecting and disconnecting the antenna produces the ones and zeros of a binary signal. Credit: Zerina Kapetanovic, CC BY-ND

We are electrical engineers who research wireless systems. During the peer review of our paper about this research, published recently in Proceedings of the National Academy of Sciences, reviewers asked us to explain why the method did not violate the second law of thermodynamics, the main law of physics that explains why perpetual motion machines are not possible.

Perpetual motion machines are theoretical machines that can work indefinitely without requiring energy from any external source. The reviewers worried that if it were possible to send and receive information with no powered components, and with both the transmitter and receiver at the same temperature, that would mean that you could create a perpetual motion machine. Because this is impossible, it would imply that there was something wrong with our work or our understanding of it.

One way the second law can be stated is that heat will flow spontaneously only from hotter objects to colder objects. The wireless signals from our transmitter transport heat. If there were a spontaneous flow of signal from the transmitter to the receiver in the absence of a temperature difference between the two, you could harvest that flow to get free energy, in violation of the second law.

The resolution of this seeming paradox is that the receiver in our system is powered and acts like a refrigerator. The signal-carrying electrons on the receive side are effectively kept cold by the powered amplifier, similar to how a refrigerator keeps its interior cold by continuously pumping heat out. The transmitter consumes almost no power, but the receiver consumes substantial power, up to 2 watts. This is similar to receivers in other ultra-low-power communications systems. Nearly all of the power consumption happens at a base station that does not have constraints on energy use.

A backscatter device has the same energy efficiency as our system, but the backscatter setup is much more complex, since a signal-generating component is needed. However, our system has lower data rate and range than either backscatter radios or conventional radios.

One area for future work is to improve our system's data rate and range, and to test it in applications such as implanted devices. For implanted devices, an advantage of our new method is that there is no need to expose the patient to a strong external radio signal, which can cause tissue heating. Even more exciting, we believe that related ideas could enable other new forms of communication in which other natural signal sources, such as thermal noise from biological tissue or other electronic components, can be modulated.

Journal information: Proceedings of the National Academy of Sciences
Authors:  Joshua R. Smith and Zerina Kapetanovic
This article is republished from THE CONVERSATION under a Creative Commons license. Read the original article.