Do you know gem stones exist because of science?

Gem stones - diamonds, rubies, sapphires, amethysts, cat-eyes .... captivate us with their beauty. What is the reason for this beauty? If I say, science? :) okay, let me explain.
More than 4,000 naturally occurring minerals—inorganic solids that have a characteristic chemical composition and specific crystal structure—have been found on Earth. They are formed of simple molecules or individual elements arranged in repeating chains, sheets, or three-dimensional arrays.
Minerals are typically formed when molten rock, or magma, cools, or by separating out of mineral-rich water, such as that in underground caverns. In general, mineral particles are small, having formed within confined areas such as lava flows or between grains of sediments. Large crystals found in geodes and other rocks are relatively rare.
Rocks themselves are made of clusters or mixtures of minerals, and minerals and rocks affect landform development and form natural resources such as gold, tin, iron, marble, and granite.

Silicates—including quartz, mica, olivine, and precious minerals such as emeralds—are the most common class of minerals, as well as the major components of most rocks. Oxides, sulfides, sulfates, carbonates, and halides are other major mineral classes.

Gemstones: Many minerals form beautiful crystals, but the most prized of all are gemstones. 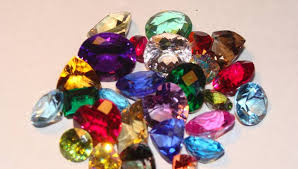 Diamonds: They come from deeper in the Earth than any other; and it’s the rock that has literally been through Hell…
Diamonds can’t form on the surface of the Earth. The ultimate gemstone is actually unstable at the pressures we live in. Diamond is made from pure carbon, and the diamond in your ring is trying to change to graphite, the form of carbon that’s most stable in our environment – and best known as black pencil “lead”. Fortunately, the transition takes place at an infinitesimally slow pace. There’s only one place that diamonds can be forged – deep beneath our feet, at least a hundred miles down. That’s as far below us. Down there, it truly is Hell: the pressure is 100,000 times higher than the pressure of air around us, and the temperature is around 1000C.

The story of diamonds begins three billion years ago, when the Earth was still young. After its fiery birth, the surface of our planet solidified – not into a single uniform piece of crust, but into several continental blocks. Each block was shaped like a ship, with a solid central “keel” reaching a hundred miles deep into the hot viscous rocks of the Earth’s mantle.

Within the keel, there was a unique environment. It was relatively cool and stable, amid the hot and ever-mobile mantle rocks. Water, carbon dioxide and methane were dissolved at high pressure in the mantle. They seeped into the keel, and reacted together. The carbon precipitated out. Under the intense pressure down here, the most stable form of carbon was diamond. These rocky ships started to drift around the globe in the process of plate tectonics. Today, the bottoms of the oldest continents still carry their ancient load of gemstones.

Diamonds can only survive if they are spewed out in the surface suddenly, so that they “freeze out” in their unstable form. Here, the diamond-rich lava is also full of carbon dioxide gas. Once it’s within two miles of Earth’s surface, the pressure of gas is higher than the weight of overlying rock. Exactly like a shaken bottle of champagne, the carbon dioxide erupts upwards. It punches a narrow “pipe” up through the rocks, and bursts through onto the surface, spraying out rocks and diamonds.
Today, we find these pipes filled with bluish kimberlite rock, with diamonds scattered throughout it.

Throughout history, rubies and sapphires have had their own separate folklore and attributes. But, astoundingly, they are actually the same gem – and identical to black crystals of emery, used on an emery board for filing your nails. The only difference lies in slight traces of impurities.

Rubies are formed of a mineral called corundum, comprised of aluminum oxide. The red color is caused by traces of chromium. Corundum also forms sapphire in many colors, which generally come from trace mixtures of iron, titanium, and chromium.

Corundum is the name that covers all these minerals. It’s a tightly bound array of aluminium and oxygen atoms. These two reactive elements bind together with immensely strong chemical bonds, making corundum the second hardest substance after diamond. In its most impure and cheap forms, such as emery, it’s a vital abrasive for industry.

A crystal of pure corundum would be colourless. But even the tiniest dash of an impurity imparts a vivid colour. If the crystal picks up traces of chromium, it glows with the deep red of a ruby. Any other ingredient, tinting the gem with another colour, gives us a sapphire. Though we think of sapphires as blue, they can range in colour from yellow to green and purple. The rare Padparadsha (“lotus flower”) type is a lovely orange sapphire.

Aluminium and oxygen are among the commonest elements in our planet, so it may seem odd that rubies and sapphires are so rare. But geology is never simple. Silicon is also a major element in the Earth. If there are silicon atoms around, the aluminium and oxygen atoms will pull them into the molecule as well, to make minerals (like feldspars) that are more complicated, but less beautiful and valuable.

In some parts of the world, like Australia, ancient deposits of bauxite have been caught up in the upheaval of plate tectonics. The bauxite has descended over fifty miles into the Earth. Here, the rock is at squeezed at thousands of atmospheres of pressure, in temperatures of hundreds of degrees. Water is driven out of the bauxite, and the aluminium and oxygen atoms are crushed together to form corundum. Tiny traces of other atoms create the whole panoply of sapphire colours, from blue through to yellow.

But the world’s biggest hoards of ruby and sapphire come from more complex geochemical cauldrons.

In other parts such as Burma a seam of lava has pushed through limestone that was laced with specks of aluminium oxide, and a smattering of chromium. The lava’s heat melted the limestone into marble. The aluminium oxide in the marble was concentrated into corundum crystals tinged with distinctive chromium red.

The world’s best sapphires are found in Kashmir – a “quintessentially rich, royal, velvety blue”. The crystals have formed where an underground pool of lava has cooled and solidified into granite, next to a deposit of limestone. Here, however, the geochemical furnace operates in a different way from the ruby mines of Burma: the gems are formed not in the marble but in the granite. Just as iron-makers use limestone as a “flux” in a blast furnace, to remove impurities from the molten iron, so the limestone in Kashmir absorbs silicon from the molten lava. In pockets of the lava where the silicon is particularly scarce, the rock solidifies to corundum. Natural traces of titanium impart its blue colour.

But not all sapphires and rubies are clear stones. Titanium dioxide (rutile) may form a form a network of tiny whiskers within the stone. Shine a light on such a stone and you see a six-rayed star.

"Jade" could be divided into two different minerals: jadeite and nephrite.

Jadeite and nephrite have distinctly different mineral compositions. Jadeite is an aluminum-rich pyroxene, while nephrite is a magnesium-rich amphibole. However, the two minerals have very similar physical properties in the eye of the average person.

Turquoise is an opaque, blue-to-green mineral that is a hydrated phosphate of copper and aluminium, with the chemical formula CuAl6(PO4)4(OH)8·4H2O.

As a secondary mineral, turquoise forms by the action of percolating acidic aqueous solutions during the weathering and oxidation of pre-existing minerals. For example, the copper may come from primary copper sulfides such as chalcopyrite or from the secondary carbonates malachite or azurite; the aluminium may derive from feldspar; and the phosphorus from apatite. Climate factors appear to play an important role as turquoise is typically found in arid regions, filling or encrusting cavities and fractures in typically highly altered volcanic rocks, often with associated limonite and other iron oxides.

Amethyst is a macro crystalline variety of Quartz with the chemical formula SiO2 (Silicon Dioxide). Mostly occurring as purple, lilac or mauve in colour, the purest form is colorless. Experts attribute the purple color of amethyst to small amounts of iron (Fe4+) impurities (approximately 40 parts per million) at specific sites in the crystal structure of quartz.

In nature, amethysts appear long and prism-like with a six-sided pyramid at either end or as crystalline crusts with only the pointed terminations (druzes).

A premium amethyst is purple, bluish purple to reddish purple in hue, vivid in intensity and medium dark in tone. Heating the amethyst removes the colour or converts it to yellow Citrine, depending on the site and original oxidation state of the iron impurities present and the intensity and duration of heating. The iron impurities need to be re-oxidized to return the original colour. The process is called irradiation.
Onyx primarily refers to the parallel banded variety of the silicate mineral chalcedony. Agate and onyx are both varieties of layered chalcedony that differ only in the form of the bands: agate has curved bands and onyx has parallel bands. The colors of its bands range from black to almost every color. Commonly, specimens of onyx contain bands of black and/or white. Onyx, as a descriptive term, has also been applied to parallel banded varieties of alabaster, marble, obsidian and opal, and misleadingly to materials with contorted banding, such as "Cave Onyx" and "Mexican Onyx".

Peridot  (sometimes called chrysolite) is gem-quality olivine and a silicate mineral with the formula of (Mg, Fe)2SiO4. As peridot is a magnesium-rich variety of olivine (forsterite), the formula approaches Mg2SiO4.

Peridot is one of the few gemstones that occur in only one color: an olive-green. The intensity and tint of the green, however, depends on the percentage of iron in the crystal structure, so the color of individual peridot gems can vary from yellow, to olive, to brownish-green. In rare cases, peridot may have a medium-dark toned, pure green with no secondary yellow hue or brown mask

Olivine, of which peridot is a type, is a common mineral in mafic and ultramafic rocks, often found in lava and in peridotite xenoliths of the mantle, which lava carries to the surface; however, gem-quality peridot occurs in only a fraction of these settings. Peridots can also be found in meteorites.

Peridots can be differentiated by size and composition. A peridot formed as a result of volcanic activity tends to contain higher concentrations of lithium, nickel and zinc than those found in meteorites.

Olivine is an abundant mineral, but gem-quality peridot is rather rare due to its chemical instability on Earth's surface. Olivine is usually found as small grains and tends to exist in a heavily weathered state, unsuitable for decorative use. Large crystals of forsterite, the variety most often used to cut peridot gems, are rare; as a result olivine is considered to be precious.

Emeralds are formed of a mineral called beryl whose chemical formula is a complex mix of beryllium, aluminum, silicon, and oxygen. The color comes from additional traces of chromium and vanadium. Different trace elements can produce other colors, allowing beryl to form semiprecious stones such as aquamarine.

Alexandrite is the very rare color-change variety of the mineral chrysoberyl.

If you disagree with me, give me evidence of your argument!