Evolution: How plants are protecting themselves from humans by becoming less visible

Evolution: How plants are protecting themselves from humans by becoming less visible

Scientists found that Fritillaria delavayi plants, which live on rocky slopes of China's Hengduan mountains, match their backgrounds most closely in areas where they are heavily harvested.

This suggests humans are "driving" evolution of this species into new colour forms because better-camouflaged plants have a higher chance of survival. It's remarkable to see how humans can have such a direct and dramatic impact on the colouration of wild organisms, not just on their survival but on their evolution itself.

Many plants seem to use camouflage to hide from herbivores that may eat them—but here we see camouflage evolving in response to human collectors.

It's possible that humans have driven evolution of defensive strategies in other plant species, but surprisingly little research has examined this.

Researchers found that the level of camouflage in the plants was correlated with harvesting levels.

In a computer experiment, more-camouflaged plants also took longer to be detected by people.

Fritillaria delavayi is a perennial herb that has leaves—varying in colour from grey to brown to green—at a young age, and produces a single flower per year after the fifth year.

See for yourself how the plant colour has changed .... 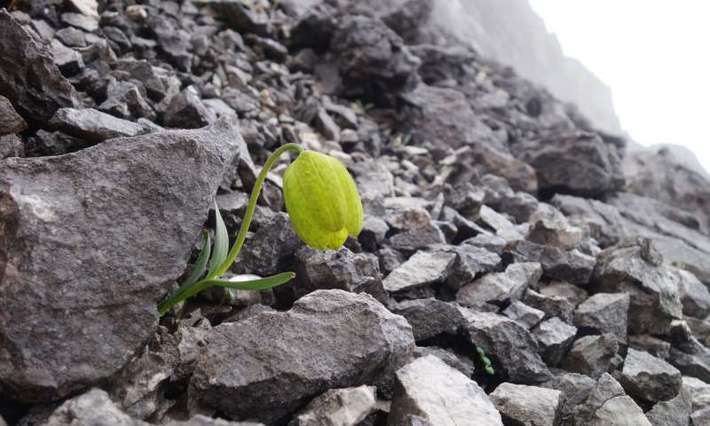 Human eyes also had a harder time spotting camouflaged plants in an online experiment, suggesting that the camouflage actually works.

Hiding in plain sight may present some challenges for the plant. Pollinators might have a harder time finding camouflaged plants, and the gray and brown coloration could impair photosynthetic activity. Still, despite those potential costs, these F. delavayi show just how adaptable plants can be.