Some people are sending me  stories of extraordinary claims and asking me to verify the truth. That is what we are here for. Okay let me post some of the stories   and the actual facts now.
Story no. 1:
Natasha Demkina is a Russian Woman who claims to be able to see into people's bodies. Just like an X-ray machine, she is able to detect problems inside of people and diagnose them.

Natasha Demkina was born in 1987 in saransk, Mordovia. According to her mother, Tatyana Vladimovna, Demkina was a fast learner, but was otherwise a normal child until she was ten years old, at which time her ability began to manifest itself.

"I was at home with my mother and suddenly I had a vision. I could see inside my mother's body and I started telling her about the organs I could see. Now, I have to switch from my regular vision to what I call medical vision. For a fraction of a second, I see a colorful picture inside the person and then I start to analyze it." words of natasha;

After describing her mother's internal organs to her, Demkina's story began to spread by word of mouth among the local population and people began gathering outside her door seeking medical consultations.

In March 2004, the producer of a Discovery Channel documentary on Natasha asked the Committee for the Scientific Investigation of Claims of the Paranormal (CSICOP) and the affiliated Commission for Scientific Medicine and Mental Health (CSMMH) to scientifically test the young woman's claims. In response, CSICOP research fellows Ray Hyman, Ph.D. and Richard Wiseman, Ph.D., and Andrew A. Scolnick designed a preliminary test for judging whether her abilities warranted further, study. After Natasha, her mother, her agent, and the producer agreed to the test rules, they all flew to New York for filming the test on the City College of New York campus.

Dr. Hyman, professor emeritus of psychology at the University of Oregon, in Eugene, and Dr. Wiseman, professor of psychology at the University of Hertfordshire, in the United Kingdom, have extensive experience in testing people who claim paranormal powers. Andrew A. Scolnick  served more than nine years as an associate editor and investigative reporter for the Journal of the American Medical Association.

Based on their preliminary research, they suspected Natasha may be using a remarkably simple but convincing technique called "cold reading," which is commonly used by psychics, astrologers, and other fortune tellers. It works especially well with people who are eager to believe the reader and therefore inclined to interpret misses as hits. Typically, the psychic offers a smorgasboard of statements while looking for any that are confirmed or get a reaction. In most cases, the client willingly twists what was said to fit his or her experiences -- "a male relative with a name like James or John" is interpreted as meaning "Aunt Jane who passed away last year."

Similarly, Natasha scans her patients from head to toe and describes a long list of abnormalities she says she sees. When she gave the researchers a reading, preciously few organs passed the inspection: For instance, Andrew A. Scolnick 's  neck vertebrae were too tight, too close. The bronchial tubes of his lungs had phlegm. The muscle on the left side of his heart is a bit weak and the valve closes late . The mucosa of his stomach is abnormal. A segment of his liver was enlarged and he was suffering poor bile circulation. The head of his pancreas is increased and abnormally dark (although not seriously). His duodenum has a little scar. His prostate gland has a nodule and is inflamed. His right kidney has "sand," while his left kidney's urethra is enlarged. In other words, he should forget about ever again signing an organ donor card.

Neither his physician nor he are aware of any of these problems. Nevertheless, Natasaha and her supporters claim she sees what doctors and their tests often miss. The only way they could prove her wrong would be to submit to an autopsy -- which they were not quite ready to do.

So they designed a simple test that would eliminate the possibility of using cold reading to fish for correct information and to prevent Natasha from making diagnoses that could not be disproved without an autopsy. They recruited six volunteers, who each had a different medical condition visible on X-rays, plus a "normal" subject who had none of the six target conditions. Natasha was handed six test cards, each with a description of a target medical condition, in English and Russian. They also provided her with anatomical drawings to make sure she understood exactly what to look for and where to look.

Natasha claims she can see abnormalities down to the cellular level and her mother says her readings are 100 percent accurate. So the test -- which required her to match at least five of the target medical conditions to the correct subjects -- should have been a breeze. She didn't have to scan their entire bodies for unknown conditions. She was told exactly what to look for and exactly where to look. Yet, it took her more than fours to complete the test and she only matched four of the conditions correctly -- a score that everyone prior to the test had agreed upon would not justify further testing.

The Discovery Channel program, The Girl with X-ray Eyes, has been broadcast in several countries.

“Elephants can take on a permanent pink color because they spray dust over their bodies to protect themselves from insects”.

Pink elephants can be found in some regions of India and recently a baby elephant in South African Safari Park, they are usually found in red soil regions. Elephant has defied odds to survive in the wild despite battling problems caused by its skin pigmentation. 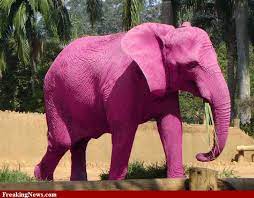 See this picture. Experts think it is probably an albino, which is an extremely rare phenomenon in African elephants.

Albino elephants are not usually white, but instead they have more of a reddish-brown or pink hue.

While albinism is thought to be fairly common in Asian elephants, it is much less common in the larger African species.

Albinism is extremely rare in the wild. The condition arises when the body fails to produce melanin, the pigment that gives hair, skin and eyes their colour. A variety of genetic mutations lead to the condition, which crops up occasionally in birds, reptiles and mammals.

Researchers are  testing the dung from the albino elephants to determine which mutations they have.

In most cases, the genes for albinism are recessive, meaning that an animal must inherit two copies of the gene (one from each parent) to become albino. So unless the  white elephant finds a male with a similar gene, she is unlikely to give birth to an albino offspring.

But this is becoming more likely. As elephant numbers shrink and inbreeding becomes more common, genetic anomalies are more likely to arise. So we may see more white elephants in the future.

However,  lack of pigment can make some animals susceptible to eye and skin problems.

So the truth is the picture of the 'very pink elephant' is photoshopped. These albino elephants usually will be pale or dirty pink.  These elephants can be seen anywhere, not in red soil regions.

Now let us check the statement that “Elephants can take on a permanent pink color because they spray dust over their bodies to protect themselves from insects” .

There are pink or red soils.   They are laterite soils. They contain iron oxide and bauxite minerals. They are found in some states of India too. 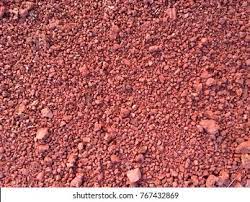 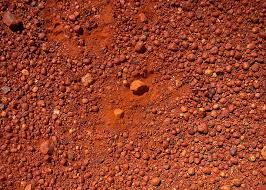 But there is no evidence for 'permanent pigmentation change' because of this. Temporary changes can be possible. But as soon as the mud or soils gets dislodged from their skin, the colour might disappear too.