Millions have been tuning in every week to watch the highly anticipated TV adaptation of The Last of Us. The show depicts a post-apocalyptic world where society has collapsed due to the outbreak of a dangerous, brain-controlling fungal infection that turns humans into hostile, cannibalistic “zombies”.

The fungus which causes the pandemic is based on the real-life Cordyceps zombie fungus that infects insects. Insects infected with Cordyceps have little control of their actions as the fungus takes over their nervous system, before eventually growing out of their bodies.

Fortunately for us, a fast-spreading fungal pandemic is pretty unlikely – but this doesn’t mean fungi aren’t still a concern.

The fungal kingdom is enormous – with an estimated three million different species worldwide.

Most fungi like colder temperatures around 10℃, meaning they’re typically unable to grow at the human body’s internal temperature of 37℃. This is one reason why most fungal infections in humans tend to stay on the skin where it’s cooler (think athletes foot and ringworm). It’s also why only a small number of fungi are able to cause infections in humans relative to the size of the fungal kingdom.

But a few species of fungi grow in warmer temperatures – and these are the ones that cause life-threatening infections. Some fungi, such as Candida yeast, can even live in our gut as part of the microbiome, and can escape into the blood and organs when we become ill with serious conditions (such as cancer).

And just as one of the characters in The Last of Us suggests, climate change may present new problems. Warming global temperatures mean fungi must adapt. This may increase the number of species which can cause serious infections in humans. There’s some evidence to suggest this may already be happening.

For instance, the fungus Candida auris is extremely concerning, since it’s resistant to nearly all antifungal drugs. It can spread rapidly around hospitals and care homes, causing serious infections in people with weak immune systems.

These infections are a bit like sepsis, where the fungus gets into the blood and organs, preventing them from working properly. But what really makes Candida auris stand out is its ability to grow at higher temperatures – able to withstand up to 42℃. 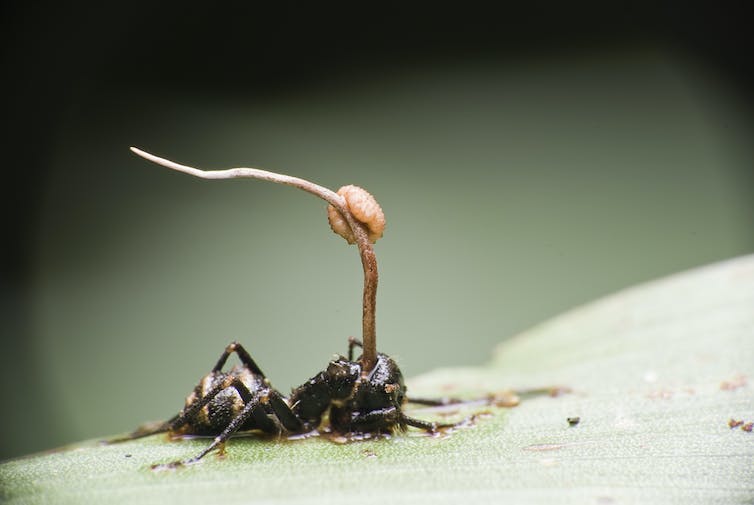 A fictional version of the real-life cordyceps ‘zombie’ virus caused the fungal pandemic in The Last of Us. shunfa Teh/ Shutterstock

The emergence of Candida auris in three continents almost simultaneously has researchers theorising the warming global climate may have contributed to its rise. Whether further global temperature increases leads to more dangerous fungal super-bugs remains to be seen.

But even if a fungus is able to adapt and grow at warmer temperatures, it’s still unlikely it will spread through a population the same way a virus might.

If the immune system fails and spores germinate in the lung, they can form different types of fungal cells that cause infection. But there’s little evidence to suggest fungi will also produce airborne spores once inside our lungs – meaning that while we can inhale fungal spores, we can’t exhale them.

Serious fungal infections can spread from the lungs into other organs – including the brain. Fungal brain infections are among the most lethal fungal infections. Most of these are caused by a fungus called Cryptococcus neoformans, which causes cryptococcal meningitis.

Around 100,000 people die from this disease every year. No other fungal infection causes more deaths in humans.

Cryptococcal meningitis happens when a person with a defective immune system – usually caused by Aids – inhales the fungal spores. The fungus escapes the lungs and gets into the brain – although exactly how this happens isn’t well understood. Once in the brain, infected patients experience symptoms such as severe headache, fever, vision problems and seizures.

While the infection is treatable with anti-fungal drugs, these are expensive – meaning those who need them can’t afford them. The Cryptococcus fungus can also become resistant to these anti-fungals.

But while there are certainly fungal infections which can spread to the brain, we probably don’t have to worry about the zombie Cordyceps fungi adapting to infect us as it does in The Last of Us – well, at least not anytime soon.

Cordyceps is not adapted to grow at our internal body temperature, nor is it able to contend with our immune system (which is far more advanced than that of an insect’s) to infect both our brain and nervous system at the same time. It would take many thousands of years of evolution for it to overcome this.

Although fungal infections are unlikely to cause a worldwide pandemic or zombie apocalypse, there’s still reason to be concerned. The number of people becoming ill with a serious fungal infections has been steadily rising over the last half century. This is concerning as we’re much less able to treat fungal infections compared to other types of infections because we have fewer antifungals.

Developing these drugs is also tricky, as fungi share similar biochemistry to our own bodies. The rise of drug-resistant fungi also puts us at threat. It’s clear more attention needs to be given to the potential dangers of fungi before it’s too late.

This article is republished from THE CONVERSATION under a creative common licence. You will find the original article here: the-last-of-us-fungal-infections-really-can-kill-and-theyre-getting...