24 October 2003 was the end of an era. On that day Concorde, the legendary supersonic airliner, made its final commercial flight, flying from London Heathrow to New York City's John F. Kennedy airport. Since then no commercial supersonic airliners have operated—the regulatory, technological and commercial problems being too much to overcome. The futuristic dream of a three-hour flight between London and New York, that Concorde offered, seemed shattered.

Now, however, almost 20 years later, we might be returning to that supersonic dream. New technological advances allow designs to succeed where Concorde failed and a range of companies and research institutes are heavily investing in a new generation of civilian supersonic aircraft. The US company Boom wants to fly a scale model of its supersonic airliner, called the Overture, in 2021, and has already raised $196 million to do it. NASA has pioneered the X-59, an experimental supersonic aircraft that lowers noise levels of the infamous sonic boom. And Aerion, in cooperation with Boeing, is developing a supersonic business jet, which could fly by 2025.

One important boost behind the resurgence of civilian supersonic aircraft is that they could produce less noise and reduce the problem of a sonic boom.

When an immobile object, such as a stereo, produces sound, its sound waves spread in all directions. If they were visible to the naked eye, these waves would look similar to what happens when a stone is dropped in a pond, with little waves spreading in concentric circles.

When an aeroplane goes supersonic, however, it moves ahead of the sound it produces. This leads to its soundwaves trailing behind the aircraft in a cone-like shape, similar to the waves trailing behind a boat. An approaching supersonic aircraft is inaudible, but when it crosses the observer, they get hit by a sudden, boom-like sound of concentrated sound waves that is quite uncomfortable. In some cases these booms can cause damage to buildings and supersonic military jets flying over land have even been known to break windows.

This means that in most countries, routine supersonic flight is banned over land, severely limiting the potential routes of a civilian supersonic plane. For this reason, Concorde only flew routes that were largely over water.

"The (intensity) of the sonic boom is mainly dependent on the aerodynamic shape of the plane.

by shaping the geometry of the plane, the loudness of the boom can be reduced from more than 100 decibels for Concorde, similar to listening to a jackhammer, to 70-80 decibels for the new designs, about the sound of a vacuum cleaner.

"Proper shaping of the aircraft with characteristics like a very long front nose can reduce noise. By mastering this we can sculpt the sound signature of the aircraft and make the boom less annoying. For now, low-boom civilian aircraft are still theoretical, although they're getting closer to launch 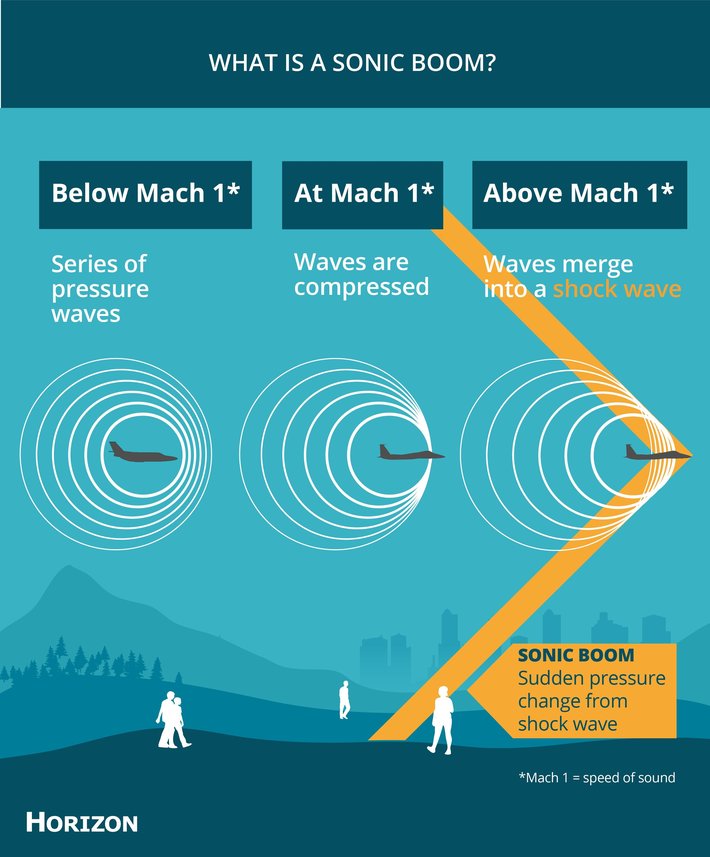 Researchers are  also studying fuel options—another key issue that new supersonic civilian aircraft will face. One of the reasons why Concorde was uneconomical was its high fuel consumption, especially during low-speed phases of flight. And although the new generation of supersonic aircraft designs have reduced fuel use through interventions like more economical engines and better aerodynamics, they would still spend more than a regular, subsonic jet, producing problems of pollution and climate impact.

A key way to reduce this is new forms of fuel. But they also depend on the fuel, and the chemical processes at the basis of combustion. Researchers are thinking about two candidates for more sustainable fuels spring out: biofuels and liquid hydrogen. Hydrogen is 'candidate number 1," said Prof. Viola, because it doesn't produce CO2 emissions. But biofuels, which are derived from biomass such as plants or waste, are also still in the running, possibly mixed in with regular jet fuel.

But for all the new technology, what will make or break the new generation of supersonic is economics. "The last straw for Concorde was that the economics just weren't viable". Across the scenarios researchers now  found that a market does exist. "It's not as high as some of the manufacturers are projecting. But granting certain assumptions, there is a market."

Their study starts from the current aviation market and projects how it will evolve, taking into account economic growth, which will most likely produce an increase in the use of airlines. It then calculates the size of the group of consumers who would take these supersonic aircraft, such as business passengers wanting fast connections or tourists who now pay for the premium offerings of airlines.

However, this potential market relies on a range of assumptions on how supersonic aircraft will evolve, such as fuel efficiency and regulation.

So we can expect to see these magnificent birds flying again very soon.