How the monarch butterfly evolved its resistance to toxic milkweed they eat and then retained some of the toxin in their bodies—as monarchs do to make themselves toxic to their predators. 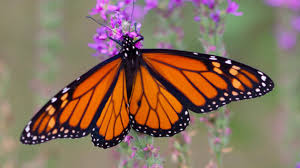 The caterpillar of the monarch butterfly eats only milkweed, a poisonous plant that should kill it. The caterpillars thrive on the plant, even storing its toxins in their bodies as a defense against hungry birds. 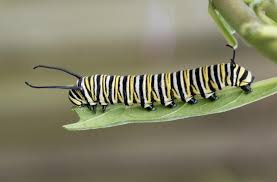 They found three mutations that changed three amino acids in the protein pump. By looking at the distribution of these changes across the insect family tree, researchers were able to predict which ones came first—and it turned out that the order in which they evolved mattered. They then tried to replay the tape of evolution by making combinations of those changes in fruit flies using the gene-editing tool CRISPR.

A single mutation predicted to have arisen in the monarch’s ancestor made the fruit fly only a little resistant to the toxins in milkweed. But when that change was combined with a second one, the fruit fly was far better protected. And when they added the third mutation, the fruit fly thrived on milkweed as well as monarchs. The flies even retained some of the toxin in their bodies—as monarchs do to make themselves toxic to predators.

The findings confirm what evolutionary geneticist Peter Andolfatto of Columbia University and his colleagues reported 27 August in eLife when they engineered fruit flies with a different editing approach, sometimes making mutations in both copies of the pump’s gene and sometimes making them in only one copy. The order in which the mutations were introduced was also critical, Andolfatto notes. In one sequence, the mutations produced healthy, milkweed-tolerant insects. In others, the flies had neurological defects, he and his colleagues reported.

His team also studied what happened when the fruit fly had just a single copy of the ion pump gene with either one, two, or three mutations. The team found that just a single copy with the initial mutation confers some glycoside resistance, a property that may have enabled the change to persist long enough for other, more beneficial mutations to occur.