Krishna: When I first saw amoebae under a microscope, I liked these single-celled  organisms very much!  They look like playful creatures making strange moments. The deadly N. fowleri is microscopic: 8 micrometers to 15 micrometers in size, depending on its life stage and environment. 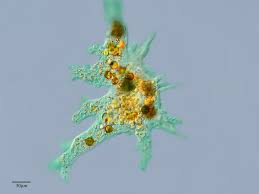 However, when I first came across infections with Naegleria fowleri, the so-called brain-eating amoeba, I was taken aback. Because, although rare, they are extremely deadly. Only 146 cases have been reported in the U.S. since 1962, with only four surviving the infection; so there is a 97% chance of death!

N. fowleri dwells in warm bodies of fresh water where it gulps bacteria in the sediment. So, most infections with this amoeba in the U.S. have occurred in south..., especially Texas and Florida, during the summer. When the sediment of a lake is disrupted, amoeba get stirred into the water. Swimmers can then inhale the parasite through their nose. From there, N. fowleri invades the olfactory nerves and migrates to the brain, where it causes a dangerous condition called primary amoebic meningoencephalitis.

While swimming in fresh water is the most likely source of this amoeba, this same amoeba and other species of amoeba can cause brain infections in people who use tap water instead of sterile water or saline when using the nasal-flushing Neti pot.

The brain is moist and warm, just like the lakes and hot springs where the amoeba thrives. But the brain doesn't have bacteria for the amoeba to eat, so the organism attacks brain cells for nutrients.

The immune system does attack while the parasite eats its way through the brain. It unleashes a massive swarm of immune cells to the infected zone, which causes inflammation and brain swelling. Unfortunately for the person whose brain is infected, this battle is being waged inside a sturdy skull, which cannot expand to accommodate a swelling brain. The increase in cranial pressure disrupts the brain's connection to the spinal cord, compromising communication with other parts of the body like the respiratory system.

Symptoms can appear as early as two days, or as late as two weeks, following inhalation of N. fowleri. The first symptoms include headache, fever, nausea and vomiting, and a change in the sense of smell or taste (due to damaged olfactory nerves mentioned above). The infection rapidly progresses through the central nervous system, producing stiff neck, confusion, fatigue, loss of balance, seizures and hallucinations. Patients usually succumb to the infection within five to seven days after the onset of symptoms.

Because of blood brain barrier many drugs cannot enter brain and treat this infection.

So if you want to swim in these waters where these amoeba live, especially if you like diving or going under water, consider wearing a nose clip to help keep amoeba parasites out of your brain. Also, avoid stirring up the sediment at the bottom of these bodies of water where the amoeba live.

Never use untreated water to drink or swim.