Q: Who are the best runners in the world and why?

Q: Why are Kenyans such good runners?

Q: What is the science behind becoming long distance runners?

They are really good distance runners, but most of these runners are actually from the same tribe of Kenyans known as the Kalenjin. They number around 5 million, making them a small minority, even in Kenya, yet they dominate most of the world's long-distance races.

There are various factors that help these people become  good long distance runners.

Kalenjin have particularly thin ankles and calves, a body build common to Nilotic tribes who grow up near the equator.This is particularly important in running because your leg is like a pendulum. The more weight you have farther away from your center of gravity, the more difficult it is to swing.

If you take a runner and put 8 pounds of weight around his waist, he can still run reasonably well. But if you put those same 8 pounds in the form of two 4-pound weights around his ankles, that will take much more energy and slow him down considerably.

The Kalenjin tribe lives right on the equator. Extremely hot dry climate often cause the body to take a form that has skinnier limbs. Longer limbs create more surface area to enable cooling, which is critical for grueling jogs.

On average, a Kenyan’s leg is 400g lighter than their European competitors, which translates to an energy saving of 8% when running. Over long distances, this small genetic advantage can really give Kenyans a leg up.

Having thin legs, in combination with their lighter frame, allows them to use less energy with their strides.

So body type confers its greatest advantage among elite athletes, where other differences — in training, in aerobic capacity — are minimal. In fact if you were to go to the Olympic starting line and measure everyone's ankles and calves before the race, you could predict, statistically, who's likely to win.

Moreover, in those tribes,  there is a thing called initiation ceremony, a rite of passage that is all about enduring pain. These people usually have scars of burns, bites of insects and what not. They are trained to endure pain.

In Kalenjin culture, tolerance for pain, hardship, toughness, is a virtue, a sign of manhood. This trait is massively important for distance running training.

And over many, many generations, this trait has been promoted and passed down. 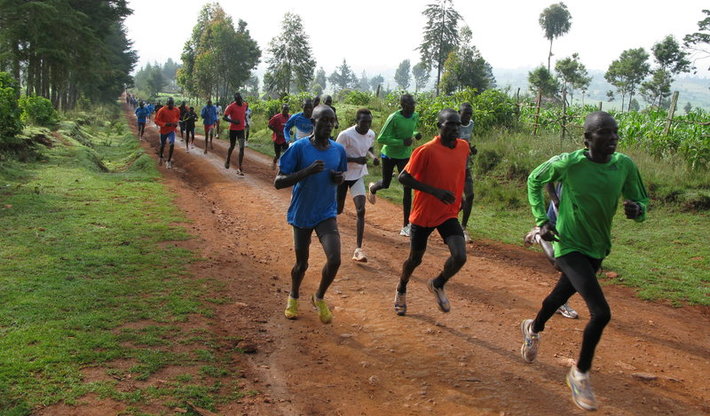 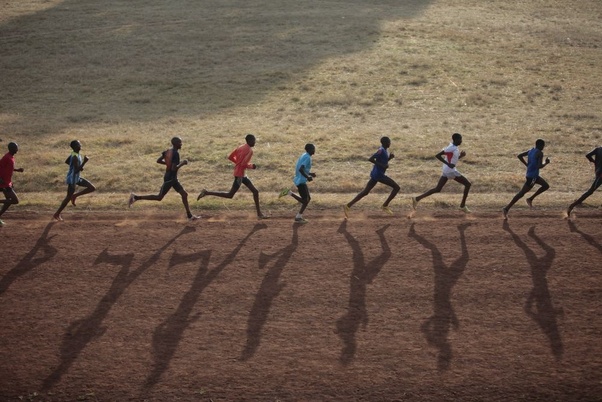 Another reason that explains the stellar performance of Kenyans is the high altitude environment they live in. Located in Africa, Kenya is a mountainous country with The Great Rift Valley running through it from North to South. With plateaus reaching an average height of 1500m, Kenyans get to experience “high-altitude training” daily, and such an environment lends itself well to running.

Altitude is another reason why this place where they live in (Iten) produces such extraordinary athletes. They train at 8,000 feet above sea level. The idea is to strengthen circulation by creating more red blood cells to carry more oxygen to muscles. The valley is 6 miles down. These runners  run up these hills every single day.

At higher altitudes, air is thin and oxygen is scarce. The human body thus adapts by producing more red-blood cells to capture the limited oxygen around. Lungs also increase in capacity to inhale more air with every breath. Consequently, Kenyan athletes have more powerful lungs and are more used to anaerobic respiration than other runners.

So these Kenyans are a group of athletes who have paired their work ethic and mental toughness with a physiological advantage to become the worlds most dominant runners.