Some Qs. people asked me on science and my replies to them - Part 48

About cholesterol, heart attacks and strokes...

Q: A lady who I know practices a very healthy life style. She is highly disciplined and doesn't eat any junk food. She is nearing sixty. Her BMI (Body Mass Index) is a healthy 21.9. She consumes fruits and vegetables and almost a vegetarian. She is very active and a roll model to all of us.

Her grand-parents, aunts and mother has several health issues like diabetes, High cholesterol, BP etc.  Her younger sister has these problems and cholesterol and diagnosed with them some five years back but this lady is  is very healthy till now.

But what surprised all of us is - recently she too developed high cholesterol and  her BP is 150/90. We are all wondering now whether practicing a healthy life style really works.

What do you think?

Krishna: Glad you asked me this question. Yes, people really get confused when they encounter such instances.

Health is influenced by multiple factors - not one or two. It is influenced by genetics (family history), age, lifestyle, nutrition, living conditions like pollution and other things like stress a person is experiencing, certain medicines you take, carcinogenic and other disease causing substances you surround yourself with.

You said the lady is nearing her sixties - so age is not on her side. We also don't know whether she is under some stress. You say her mother and other relatives have some of these conditions and sister has high cholesterol. That means she has a predisposition to these conditions  genetically.

Familial hypercholesterolaemia (FH) is an inherited condition characterised by higher than normal levels of LDL blood cholesterol. Familial hypercholesterolaemia causes up to 10 per cent of early onset coronary artery disease – heart disease that occurs before the age of 55 years. The cause is a mutation in a gene.  It's more common than other genetic diseases. Assuming that a parent has FH, there's a one-in-two chance that a child will have it — a 50 percent likelihood.

(There is a way to find this condition -  a white ring around the cornea of the eye is sometimes seen in patients even under the age of 45. See the pictures posted below carefully. Did you see the white rings? These rings are indications of cholesterol ... fat deposits ... cause these rings ... 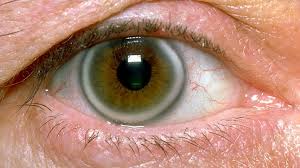 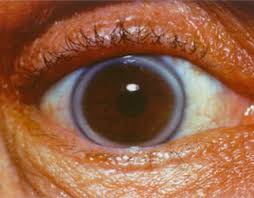 Usually people above sixty develop them. When you observe them before that age, it indicates high cholesterol.)

Only 20% of cholesterol in your blood stream comes from your diet. The remaining amount is produced by your body! Surprised? Yes!?

Although we measure cholesterol production in the blood, it's found in every cell in the body. Cholesterol as a waxy, whitish-yellow fat and a crucial building block in cell membranes. It's also used to make vitamin D, hormones (including testosterone and estrogen), and fat-dissolving bile acids. In fact, cholesterol production is so important that your liver and intestines make about 80% of the cholesterol you need to stay healthy. Only about 20% comes from the foods you eat.

If you eat only 200 to 300 milligrams (mg) of cholesterol a day (one egg yolk has about 200 mg), your liver will produce an additional 800 milligrams per day from raw materials such as fats, sugars, and proteins.

Since cholesterol is a fat, it can't travel alone in the bloodstream. It would end up as useless globs (imagine butter fat floating in a plate of water). To get around this problem, the body packages cholesterol and other lipids into minuscule protein-covered particles that mix easily with blood. These tiny particles, called lipoproteins (lipid plus protein), move cholesterol and other fats throughout the body.

Cholesterol and other lipids circulate in the bloodstream in several different forms. Of these, the one that gets the most attention is low-density lipoprotein— better known as LDL, or "bad" cholesterol. But lipoproteins come in a range of shapes and sizes, and each type has its own tasks. They also morph from one form into another.

According to Harvard medical School*, these are the five main types:

For some people, high blood levels of cholesterol come from a diet that's high in saturated fat and animal products, but for others, high cholesterol is genetic: It runs in the family. In addition to getting cholesterol from dietary sources like meat and dairy, our bodies make cholesterol, too. And some people produce more cholesterol than can be safely handled, causing a buildup of fat and plaque in their arteries.

Lifetime risk of a cardiovascular event — heart attack or stroke — is 20 times greater for someone with FH. And for women in the age group of 20 to 39, there is 125 times greater risk. Men tend to have cardiovascular events 10 years earlier, in their thirties and forties, and women in their fifties and sixties. Several people with FH are at a significant risk of heart attack or stroke at a young age – for many, as young as in their twenties, thirties, and forties. Familial hypercholesterolemia is the most common life-threatening autosomal-dominant condition in the world. Autosomal dominant means that both boys and girls can inherit the condition, and even one copy of the gene causes the disease. People with FH are 20 times more likely to have a premature heart attack or stroke. FH affects 1 in 200 to 500 people worldwide. And get this clearly: it is a family condition. Each child of someone with FH has a 50 percent chance of inheriting the genetic mutation.

Healthy life style like  exercise, low-fat diet, not smoking helps only up to a certain extent. But this FH condition starts at birth; cholesterol is high from day one [in patients with FH]. Diet alone is rarely enough. Statin medication is the main treatment for these patients, but it's often not enough!

Differences between various patients depend on their genetic make up plus life style too. If these people consume unlimited amounts of LDC (bad cholesterol), that complicates the issue.

PCSK9 inhibitors like Praluent  reduce the amount of LDL cholesterol in the circulation, and lower total cholesterol. Other medications, like ezetimibe [Zetia, which decreases cholesterol absorption in the intestine] and bile acid sequestrants [such as cholestyramine or colestipol] can also be used. Some patients can’t tolerate medication, or their cholesterol is so high that medication doesn’t work. For them, LDL apheresis is a procedure to remove cholesterol from the blood, like dialysis, and is done every one to two weeks.

The observational data (not research, but obtained from hospitals) we have shows that for FH patients on statins, the risk level is similar to that in people without FH. This fits with the cholesterol hypothesis, that patients born with low cholesterol don’t get heart disease.

By ages 9 to 11, all children should get screened for cholesterol levels. Then if they have FH, they can institute diet and exercise early on as lifestyle changes which might help them to some extent. Children of FH patients should be really careful and should have a complete control on life style parameters.

The hormone cortisol is released in response to stress. Studies suggest that the high levels of cortisol from long-term stress can increase blood cholesterol (1), triglycerides, and blood pressure. These are common risk factors for heart disease.

Eating saturated fat, found in animal products, and trans fats, found in some commercially baked cookies and crackers, can raise your cholesterol level even in people without FH. Foods that are high in cholesterol, such as red meat and full-fat dairy products, will also increase your total cholesterol. Obesity is a risk factor too. Saturated fats and oils, such as butter, bacon drippings, lard, palm oil, and coconut oil, trans fats or partially hydrogenated vegetable oils are bad too.

Okay, now you know some people just can't avoid high cholesterol totally because they have it in their genes.  They can only avoid premature death by being careful. But if you don't have a genetic predisposition, why should you risk it by  being reckless? Think about it.

So the answer to your question is an 'emphatic yes' i.e., practicing a healthy life style works very well for people who are not genetically predisposed to certain health conditions. And it works to some extent for vulnerable human beings.