Some Qs. people asked me on science and my replies to them - Part 70

Q: By early detection of any disease, can life be prolonged?

Krishna: Recent thinking on this takes into account 'Lead-time Bias'. Now I am going to tell you a  secret that doctors and hospitals won't tell you!

Lead time is the length of time between the detection of a disease and its usual diagnosis. Early diagnosis by screening may not prolong the life of someone. Lead time bias can affect interpretation of the five-year survival rate. 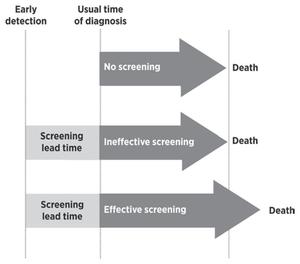 How lead-time bias can make screening look effective when there is no benefit.

Let us consider two cases of A and B.

At age 40 patient A has no symptom. His doctor orders a few tests, which accidentally pick up early signs of a slow growing cancer. He is started on treatment. He dies at age 60.

Patient ‘B’ develops symptoms of cancer which forces him to see a doctor and is diagnosed to have cancer at age 50, he too dies at age 60.

‘A’, ‘B’ and everyone else believe that with early diagnosis ‘intelligent A’ lived for 20 years, while ‘careless B’ died within 10 years of cancer diagnosis. (See red bidirectional arrow).

But in reality the treatment and early detection has done no good to ‘A’. Even if ‘B’ had an early diagnosis, it would not have changed the time course of this particular cancer. The disease might have started at 40 in both, and killed them at 60; that is the reality!

Screening sounds so sensible – how better to ward off serious consequences of disease and stay healthy? While screening is helpful for several conditions, screening can harm as well as help.

When unbiased evidence was obtained from clinical trials done in Canada and Germany, involving about three million children in all, researchers were unable to detect any benefit from screening, but there were obvious harms (1). These included unjustified surgery and chemotherapy, both of which can have serious unwanted effects. In the light of this evidence, infant screening for neuroblastoma  in Japan was stopped in 2004.

Meanwhile the infants of New South Wales in Australia were largely spared from neuroblastoma screening, which had been planned in the 1980s after the encouraging early Japanese studies. But the Japanese results, as mentioned above, showed longer survival from date of diagnosis for the screened infants; survival from date of birth had not been analyzed. So, an Australian specialist stepped in and re-analyzed the Japanese results from dates of birth of the infants rather than from dates of diagnosis – this analysis did not show any difference in the survival rates of the screened and unscreened infants. This convinced the New South Wales authorities to abandon their screening programme, thereby saving the infants from unnecessary harms and the health service from unnecessary expense.

Screening for neuroblastoma illustrates how easily one can fall into the trap of assuming that because a disease can be detected early, screening must be worthwhile . . . The two studies demonstrate how neuroblastoma screening was not only worthless, but led to “over-diagnosis” and must have identified tumours that would have spontaneously regressed. Both studies mentioned children in the screened group suffering severe complications due to the treatment . . . Hopefully these lessons will be learned when considering the implementation of other screening programmes – for example screening for prostate cancer (2).

Mammographic screening for breast cancers might show several false positives that give patients sleepless nights and severe stress. Some experts point out that screening mammograms usually do more harm than good, because there is no evidence that they save lives or result in less radical surgery. Experts do not recommend MRIs for screening women of average risk, but clinical studies are still being done to determine whether they should be. This is a highly contentious issue.

Some cancers like slow growing non-metastatic prostate cancer does not spread whatever much doctors do or don’t do; and creates symptoms once they spread. An sensitive diagnostic test called PSA picks up cancer prostate early, but PSA directed treatment has not shown to alter outcome. Most guidelines now advice not to have routine PSA testing done for asymptomatic adults.

Prostate cancer is the second most common cancer in men worldwide, and broadly falls into two types. Some men have an aggressive form of the disease; these dangerous cancers spread rapidly and the death rate is high. But many men have slow-growing cancers that would never progress to cause a danger to health during a man’s lifetime. Ideally, a screening test would detect the dangerous cancers – with the hope that they could be treated – but not the slow-growing ones. The reason is that treatment of any sort of prostate cancer risks distressing side-effects such as incontinence and impotence – a heavy price to pay if the cancer would not have caused problems in the first place (3).

Blood levels of a substance called prostate-specific antigen (PSA) are raised in most men with prostate cancer. However, there is no clear cut-off level that will distinguish between men who have cancer and those who do not,16 and as many as one in five men with clinically significant cancers will have normal PSA levels. Moreover, despite its name, PSA is anything but ‘specific’ – for example, non-cancerous prostate tumours, infections, and even some over-the-counter pain-killers can cause raised PSA levels. On these grounds alone, PSA clearly has serious limitations as a screening test.
‘Prostate cancer has been described as the par excellence example of overdiagnosis.

This is also true for many cases of chronic coronary artery disease, stable angina, and many genetic diseases which manifest later in life. Unless a treatment alters the natural course of the disease, the endpoint doesn’t change. Removing a cancerous mass or removing a coronary block gives excellent symptomatic relief, but does very little to prolong survival (this is not true for all cancers or heart disease).

Earlier ‘Genetic testing’ was more or less confined to generally rare, single-gene disorders – for example, the childhood-onset muscle-wasting disease Duchenne muscular dystrophy, or Huntington’s disease, a progressive nervous system disorder that usually starts to affect people in middle age. Genetic tests are done to diagnose such conditions but can also be used to screen healthy people whose family history indicates that their chances of developing the disorder in question are above average, and to guide their family plans. However, most diseases cannot be attributed to a single faulty gene. Usually, diseases depend on the way in which risk variants in several genes interact, and on the interaction of these genetic risk variants with environmental factors. Only when there is a ‘critical’ combination of genetic risk variants and environmental factors will a disease become apparent (4). Despite the complexity of ascribing most conditions to aberrant genes, media and promoters of direct-to-consumer genetic testing stress the supposed virtue and simplicity of genetic risk profiling.

Selling screening can be easy. Induce fear by exaggerating risk. Offer hope by exaggerating the benefit of screening. And don’t mention harms. It is especially easy with cancer — no diagnosis is more dreaded. And we all know the mantra: early detection is the best protection. Doubt it, and someone may suggest you need your head examined.

Messages selling screening are everywhere. The news regularly tells the story of celebrities asserting that their lives have been saved because of the early diagnosis of a cancer. It is very unusual to hear stories of those injured by overdiagnosis and overtreatment.

Popular magazines report emotionally charged but wholly unrepresentative stories about young women with breast cancer and their fears of dying and leaving their young children.

Beware of such marketing strategies.

The primary purpose of screening individuals or populations is to reduce the risk of death or future ill health from a specific condition by offering a test intended to help identify people who could benefit from treatment (4). The aim of screening is not simply to diagnose disease earlier – this may not help anyone and it can even do harm.

There are some screening biases ...

Bias results from a  problem with the methods of a study that can't be corrected in an analysis. We can adjust for the effects of confounders in an  analysis. For example, we can calculate adjusted rates, but we can't correct for biases.

There are two common types of biases in any research ...

Information bias - data is not accurate, possibly due to faulty instruments, or possibly the data is wrong.

Selection bias - the study population is not representative of the larger population, possibly because of a poor sampling process, or because of a lot of individuals are lost to follow-up

Common biases in screening include: .

Lead time and length biases reduce the utility of using increased survival time as the measure of success for a screening modality. Instead, screening programs have traditionally been assessed with changes in mortality rates. Disease-specific mortality rates have been the most commonly used measure of disease frequency.

Can we design a screening study without these biases?

For lead time bias – use mortality rather than survival rates.

However, having said that I want to add that there are many examples of beneficial screening. Perhaps the most widely used in adults is the checking of risk factors for heart disease and stroke that is routinely done in primary care. There is good evidence that high BP, high cholesterol levels, and  smoking increase the risk of these diseases, and that identifying, advising, and treating people with such risk factors can prevent heart attacks and strokes.

According to a gastroenterology surgeon (Dr. Jitendra Mistry) I discussed this with

Like I have said before, scientific knowledge is like a knife. Which way and how you use it dictates your smartness and it is entirely up to you which way you want to go. The Choice is definitely yours!

1. Welch HG. Should I be tested for cancer? Maybe not and here’s why. Berkeley and Los Angeles: University of California Press; 2004. p. 77. [Reference list]