We have known about synthetic viruses developed to kill bacteria and tackle antimicrobial resistance (2).

NPL and UCL have engineered a purely artificial virus, which has the ability to kill bacteria on contact.

This new virus is built using the same geometric principles that determine structures of naturally occurring viruses, known as polyhedral capsids. The resulting synthetic virus acts as a 20-nm spherical 'drone' that, upon recognising bacterial cells, attacks their cell walls with bullet speed and efficacy. 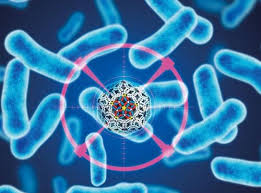 Now researchers in virology and veterinary bacteriology at the University of Bern have cloned the novel coronavirus (SARS-CoV-2). The synthetic clones are being used by research groups worldwide to test corona samples, find antiviral drugs and develop vaccines as quickly as possible. The method developed in Bern can also be used in future to combat other highly infectious viruses.

The researchers used a yeast cell system developed in Bern which has now proved its value in an epidemic situation for the first time. Scientists have optimised this system to allow labs to clone coronaviruses and other viruses quickly.

The Bern method allows a rapid response to new and fast-spreading viruses and their characteristics in real time—i.e. during an outbreak.

The abstract of the paper published in Nature (1) says...

Reverse genetics has been an indispensable tool revolutionising insights into viral pathogenesis and vaccine development. Large RNA virus genomes, such as from Coronaviruses, are cumbersome to clone and manipulate in E. coli due to size and occasional instability. Therefore, an alternative rapid and robust reverse genetics platform for RNA viruses would benefit the research community. Here we show the full functionality of a yeast-based synthetic genomics platform to genetically reconstruct diverse RNA viruses, including members of the Coronaviridae, Flaviviridae and Paramyxoviridae families. Viral subgenomic fragments were generated using viral isolates, cloned viral DNA, clinical samples, or synthetic DNA, and reassembled in one step in Saccharomyces cerevisiae using transformation associated recombination (TAR) cloning to maintain the genome as a yeast artificial chromosome (YAC). T7-RNA polymerase has been used to generate infectious RNA to rescue viable virus. Based on this platform we have been able to engineer and resurrect chemically-synthetized clones of the recent epidemic SARS-CoV-2 in only a week after receipt of the synthetic DNA fragments. The technical advance we describe here allows a rapidly response to emerging viruses as it enables the generation and functional characterization of evolving RNA virus variants—in real-time—during an outbreak.

The Bern researchers have also been inundated with requests from companies and fellow researchers to test potential antiviral agents on the clones in the high-security laboratory.

The number of infections caused by the novel coronavirus currently stands at more than 3,500,000 worldwide. Researchers and pharmaceutical companies around the world are working under intense pressure to test samples more efficiently and develop vaccines. The synthetic viruses cloned in Bern represent a major step forward in the diagnosis of patient samples and the development of new antiviral agents. Viruses are difficult to clone: they are tinier than even the smallest bacteria and extremely variable. The new model system using yeast cells shows that it is ideally suited for reconstructing coronaviruses and other viruses.

How the coronavirus was cloned

Like parasites, viruses depend on a host cell to reproduce—they invade body cells and reprogram them to produce new viruses. These escape from the cell and are spread further, for example by droplet infection (coughing or sneezing). In the Bern model, pieces of the coronavirus genome were produced from synthetic DNA and then reassembled in yeast cells using a process known as transformation-associated recombination (TAR). The result was an artificial yeast chromosome on which the genetic information of the virus was stored. Infectious RNA was then produced in vitro (without yeast cells) using the catalyst T7 RNA polymerase. The resulting RNA was introduced into animal cells, where new, synthetic coronaviruses then multiplied—the clones had been created.

This is really exciting. We will report more about the cloning in future. Watch this space.