The importance of science communication through art

When we think about science communication, we usually think about words. But have you ever thought that there could be situations where images could do more to your perception than mere words? And when the images come in the form of aesthetically programmed art? The result could be electric! This was what I found when one of the curators of my Italian art show in an art gallery told me, "Krishna, never seen or heard this. People  standing in front of your art work 'Under the Microscope' were discussing science, not art! Some were trying to identify the microbes you painted!"

People who bought my 'science based art work' and hung them on the walls of their drawing rooms told me almost everybody who saw them there got curious, asked about them and discussed about the science themes!

Some even told me that the moment they saw my art works and poems in my write-ups and not maths and complex data, they felt relieved and their minds calmed because the former ones indicated simplicity and fun.

I was extremely thrilled to hear these things.

And during my shows at various places, I have noticed, people instantly got attracted towards the  'lab objects' in my paintings and themes of my works than any other subject of art work around, maybe because of the innovative way I presented the science themes! They were curious to know what the work was all about and how I was able to connect science with art. My poems made them smile and enjoy. Is science still a difficult subject?  'No' was the unanimous reply I got to my question!

My science-art messages got through various barriers!! The mental blocks were broken!!! Till now we have seen science posters and science illustrations only in science exhibitions and schools. With science related art, science could be taken directly to the drawing rooms and living rooms. They can be exhibited almost everywhere and make people and even laymen see, think, discuss and know something about science related topics.

How about science invading the whole of living dwellings and public places? How about making people accept science as a way of life as a result of this?

And a person need not be literate to understand science through art. Moreover, children would love to learn science through art! Whenever I try to paint something related to science, my illiterate servant maid and her young school going son are the first people who try to learn about the theme! They stop their work, stand  beside me and ask  several serious questions about the work. I realized recently to my pleasant surprise that without me even noticing it, they learnt a lot about scientific concepts when they tried to relate them to the real life situations. When I asked them how they knew all those things they say, they told me they learned them through my 'pictures' (art) I created! I accomplished something I never thought I would!

According to some scientists, collaborating with artists are creating some problems as (1) they get disturbed by outsiders invading their labs,  (2) artists don't understand their subject properly, (3) artists are very emotional and therefore don't take criticism seriously, (4) artists think they can teach science to scientists, (5) twisting the meaning, joking about it by artists in their art works doesn't convey the messages of science properly,  (6) as there is no shared common ground or praxis ( although artists think there is), agreeing on a few things is becoming difficult.

I think a scientist can do more justice to a science-art work than an artist. This is because scientists understand their subject much better than an 'outsider' artist and know exactly what is to be communicated. As artists don't understand the subject as much as a person of science can, they try to compensate it by twisting, joking, and changing the meaning and complicating the communication process.

Scientists undoubtedly understand the culture they were born into and grew up in as well as any artist. Therefore, it is not difficult for them to overcome the cultural conditioning of the minds of people around them if they really try.

So I feel, scientists should definitely try to communicate their work through art and literature themselves. 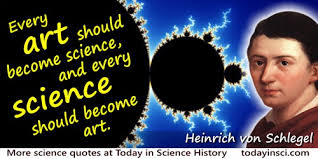