We can see actual evolution before our own eyes!

Q: Why can't we see any actual examples of evolution? Is it because they are all "microevolution"?

Krishna: Can't we see any actual examples of evolution? We can! I will give a few examples.

•This pattern is best explained by extremely rapid convergent evolution

The earliest stages of convergent evolution are difficult to observe in the wild, limiting our understanding of the incipient genomic architecture underlying convergent phenotypes. To address this, researchers capitalized on a novel trait, flatwing, that arose and proliferated at the start of the 21st century in a population of field crickets (Teleogryllus oceanicus) on the Hawaiian island of Kauai. Flatwing erases sound-producing structures on male forewings. Mutant males cannot sing to attract females, but they are protected from fatal attack by an acoustically orienting parasitoid fly (Ormia ochracea). Two years later, the silent morph appeared on the neighbouring island of Oahu. Researchers tested two hypotheses for the evolutionary origin of flatwings in Hawaii: that the silent morph originated on Kauai and subsequently introgressed into Oahu and that flatwing originated independently on each island. Morphometric analysis of male wings revealed that Kauai flatwings almost completely lack typical derived structures, whereas Oahu flatwings retain noticeably more wild-type wing venation. Using standard genetic crosses, they confirmed that the mutation segregates as a single-locus, sex-linked Mendelian trait on both islands. However, genome-wide scans using RAD-seq recovered almost completely distinct markers linked with flatwing on each island. The patterns of allelic association with flatwing on either island reveal different genomic architectures consistent with the timing of two mutational events on the X chromosome. Divergent wing morphologies linked to different loci thus cause identical behavioral outcomes—silence—illustrating the power of selection to rapidly shape convergent adaptations from distinct genomic starting points (5).

Populations of a male cricket on different Hawaiian islands have lost their ability to chirp as a result of separate, but simultaneous, evolutionary adaptations to their wings. The changes, which allow the insects to avoid attracting a parasitic fly, occurred independently over just 20 generations and are visible to the human eye, a study reveals.

The findings could help to shed light on the earliest stages of convergent evolution — when separate groups or populations independently evolve similar adaptations in response to natural selection.

Male field crickets (Teleogryllus oceanicus) are known for their chirping sound, which is produced by scraping their wings across one another. The wings’ veins form special structures that make the vibrations that we hear as the crickets’ song. “The mechanism is like rubbing your fingernail on the file of a comb” .

The nightly serenades lure in females and facilitate reproduction — but unfortunately for the males in Hawaii, the chirping also attracts a deadly parasitic fly, Ormia ochracea. The fly larvae burrow into the cricket and grow inside, killing the host when they emerge a week or so later.

Both species are likely to have arrived in Hawaii at the end of the last century — the cricket from Oceania, and the fly from North America. To protect themselves from their new enemy, large numbers of male crickets on the Hawaiian island of Kauai quickly stopped chirping.

The change seems to have been caused by a mutation that altered the shape of their wings, making them incapable of producing the chirping noise. The feat was achieved over less than 20 generations, a mere evolutionary blink of an eye, and, with the crickets living just a few weeks, a very rapid process.

This evidence suggests that the mutations happened independently on both islands, making the Hawaiian silent crickets “an excellent example of convergent evolution”.

Although evidence for convergent evolution can be seen throughout the natural world, it is difficult to catch it as it happens. The study shows that superficially similar convergent solutions to attacks by parasites attracted by sound “can evolve in radically different ways. The genome can create similar results using very different sets of genes.”(1) 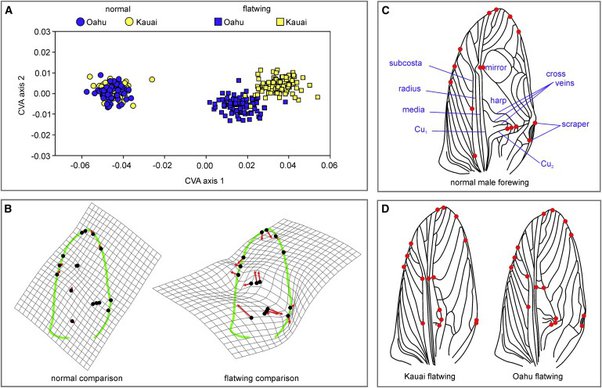 Morphological Differences between Male Wing Morphs and between Islands

Evolution is normally described as the consequence of freak mutations winding up helping a species adapt and change.
Florida lizards evolve rapidly, within 15 years and 20 generations! (2,3)
Evolution is often thought of as being such a slow process that it can’t be observed. That’s not true, but to happen quickly, there usually has to be some sort of strong pressure on a population to drive any sort of fast evolution.
Scientists working on islands in Florida have documented the rapid evolution of a native lizard species — in as little as 15 years — as a result of pressure from an invading lizard species, introduced from Cuba.

After contact with the invasive species, the native lizards began perching higher in trees, and, generation after generation, their feet evolved to become better at gripping the thinner, smoother branches found higher up.

The change occurred at an astonishing pace: Within a few months, native lizards had begun shifting to higher perches, and over the course of 15 years and 20 generations, their toe pads had become larger, with more sticky scales on their feet.
The native lizards studied, known as Carolina anoles or green anoles, are common in the southeastern U.S. The invasive species, Cuban anoles or brown anoles, are native to Cuba and the Bahamas. Brown anoles first appeared in South Florida in the 1950s, possibly as stowaways in agricultural shipments from Cuba, and have since spread across the southeastern U.S. and have even jumped to Hawaii.

This latest study is one of only a few well-documented examples of what evolutionary biologists call "character displacement," in which similar species competing with each other evolve differences to take advantage of different ecological niches. A classic example comes from the finches studied by Charles Darwin. Two species of finch in the Galápagos Islands diverged in beak shape as they adapted to different food sources.

The researchers think that the competition between brown and green anoles for the same food and space may be driving the adaptations of the green anoles. Researchers also noted that the adults of both species are known to eat the hatchlings of the other species.
So it may be that if you're a hatchling, you need to move up into the trees quickly or you'll get eaten. Maybe if you have bigger toe pads, you'll do that better than if you don't.
There lies the stress and pressure to evolve as fast as you can! And it is happening (3,4)! 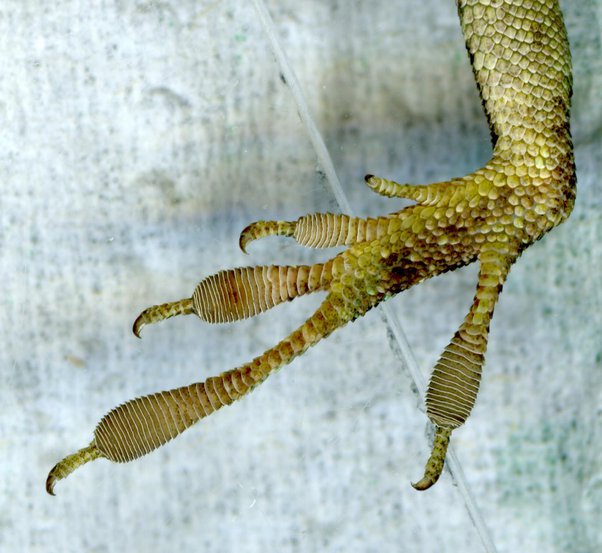 This is a flatbed digital scan of the left hind foot of <I>Anolis carolinensis</I>, or green anole. Toepad measurements were taken on the expanded scales at the end of the longest toe.

Darwin thought evolution was too slow to change the environment on observable timescales. Ecologists are discovering that he was wrong. We can actually observe them now! These examples are the evidences (2).

Why can't we see any actual examples of evolution? Is it because they are all "microevolution"? 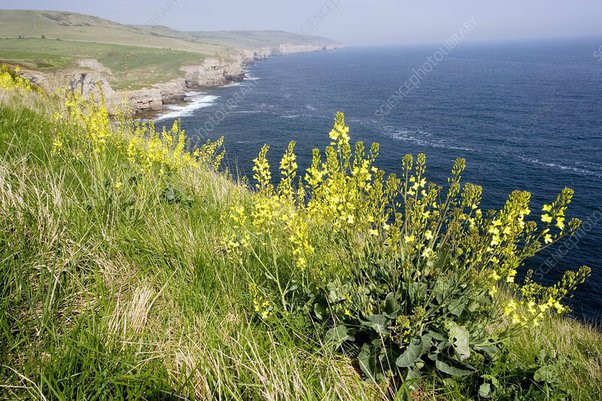 The pic above shows wild brassicas growing in their native areas somewhere in the United Kingdom. These have been growing here for a few million years back into our great geological past. It is only in the past 15000–10000 years or so that these were picked up by man who had abandoned forests as forager hunter and taken to farming. Since then selective breeding of these wild brassicas has led to the ‘evolution’ of 6–8 types we variously relish as brassica veggies.

“Accelerated evolution” for anybody to see !!! (see suggested reading below) 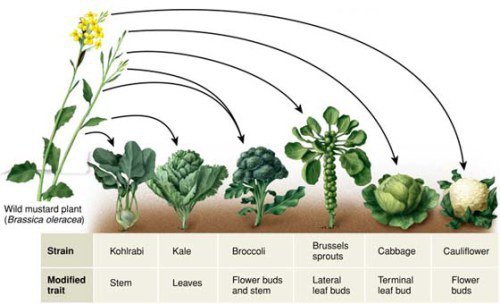