What is Nocebo Effect?

In medicine, a nocebo (Latin for "I shall harm") is an inert substance that creates harmful effects in a patient. The nocebo effect is the adverse reaction experienced by a patient who receives a nocebo. Conversely, a placebo is an inert substance that creates either a beneficial response or no response in a patient. The phenomenon by which a placebo creates a beneficial response is called the placebo effect. In contrast to the placebo effect, the nocebo effect is relatively obscure.

Both nocebo and placebo effects are psychogenic. Rather than being caused by a biologically active component of the placebo, these reactions result from a patient's expectations and perceptions of how the substance will affect him or her. Though they originate from psychological sources, nocebo effects can be either psychological or physiological.

In the strictest sense, a nocebo response is where a drug-trial's subject's symptoms are worsened by the administration of an inert, sham, or dummy (simulator) treatment, called a placebo.

In its original application, nocebo had a very specific meaning in the medical domains of pharmacology, and nosology, and aetiology.

It was a subject-oriented adjective that was used to label the harmful, injurious, unpleasant or undesirable reactions (or responses) that a subject manifested - thus, nocebo reactions (or nocebo responses) - as a consequence of the administration of an inert, dummy drug, in cases where these responses had not been chemically generated, and were entirely due to the subject's pessimistic belief and expectation that the inert drug in question would produce harmful, injurious, unpleasant or undesirable consequences.

It is also important to remember that in these cases, despite the fact that there is no "real" drug involved, the actual harmful, injurious, unpleasant or undesirable biochemical, physiological, behavioural, emotional and/or cognitive consequences of the administration of the inert drug are very real.

Negative suggestion can induce symptoms of illness. Nocebo effects are the adverse events that occur during sham treatment and/or as a result of negative expectations. While the positive counterpart —- the placebo effect -— has been intensively studied in recent years, the scientific literature contains few studies on nocebo phenomena. Nocebo responses can, for instance, be brought about by unintended negative suggestion on the part of doctors or nurses, e.g., when informing the patient about the possible complications of a proposed treatment. It is also assumed that a certain proportion of the undesired effects of drugs can be attributed to nocebo effects. 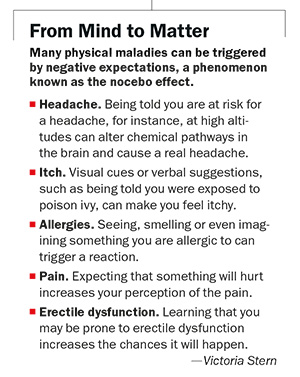 What are the consequences for clinical practice? Doctors find themselves in an ethical dilemma between their obligation to tell the patient about the possible side effects of a treatment and their duty to minimize the risk of a medical intervention and thus to avoid triggering nocebo effects. As one possible strategy to solve this dilemma, Häuser et al. suggest emphasizing the tolerability of therapeutic measures. Another option, with the patient's permission, would be to desist from discussing undesired effects during the patient briefing (1).

A study published in 2012 in the Journal of Asthma found that when asthma patients merely looked at pictures of known allergens, they reported 15 percent more symptoms than when they viewed neutral images. Other studies have shown that asthma patients experience more constricted airways than healthy control subjects in response to emotional stimuli. According to researchers, this patients' perception of symptoms might be based on learned associations more than on the actual state of their lung function. The researchers hope that doctors and public health associations will tweak their messages to asthma sufferers so that they do not overreact to experiences that may be harmless. They  suggest that treatments should change: if a patient complains of increased symptoms but a lung function test does not reveal any changes, a doctor might see if other factors are influencing symptoms, such as anxiety or high stress levels. This knowledge could give asthmatics more control over how they are affected by their environment.

In clinical studies it was found that  asking some questions may even plant the suggestion in the minds of patients. In the trials, when researchers are searching for adverse effects, people may overstate them making the whole research a big sham!

The Nocebo Effect in case of statins can be heard here: https://soundcloud.com/user-499485249/the-nocebo-effect-of-statins

One of the strangest of stories based on Nocebo effect was reported in the British Medical Journal in 1995:

A builder aged 29 came to the accident and emergency department having jumped down on to a 15 cm nail. As the smallest movement of the nail was painful he was sedated with fentanyl and midazolam. The nail was then pulled out from below. When his boot was removed a miraculous cure appeared to have taken place. Despite entering proximal to the steel toecap the nail had penetrated between the toes: the foot was entirely uninjured.

His pain was a “nocebo”!

One more thing I want to add here is here is no evidence of black magic , according to science.

Then why do people suffer? Because of a psychological effect called “Nocebo”.

Both nocebo and placebo effects are psychogenic. These reactions result from a persons expectations and perceptions of how the substance or something will affect him or her. Negative suggestion can induce symptoms of illness. Nocebo effects are the adverse events that occur during sham treatment and/or as a result of negative expectations.

It usually effects the weak minds. So, if you believe that black magic can harm you, you ‘feel’ sick. And think everything bad happening in your life is because of it.

Only if you get rid of your baseless beliefs, you can get rid of black magic psychological effects.

We are now getting reports of 'vaccine related nocebo effects'.

There is some psychosomatic input about feeling sick. There are a lot of questions on the net about the ‘negative’ effects of the vaccine, so I’m willing to bet these people have talked themselves into suffering some of these expected ‘negative’ effects.

Some people are scared about vaccines because of misinformation spread about them on various social media. So after taking vaccines, they think they are suffering because of vaccines.

Oh my!  Stop reading/viewing misinformation. The more  you do that the more you get scared and feel negative, nocebo effects.

The research is in the journal Psychosomatic Medicine. [Kalina J. Michalska et al., Anticipatory effects on perceived pain: Associations with development and anxiety]

More than two-thirds of the common side-effects people experience after a Covid jab can be attributed to a negative version of the placebo effect rather than the vaccine itself, researchers claim.

Scientists in the US examined data from 12 clinical trials of Covid vaccines and found that the “nocebo effect” accounted for about 76% of all common adverse reactions after the first dose and nearly 52% after the second dose.

The findings suggest that a substantial proportion of milder side-effects, such as headaches, short-term fatigue, and arm pain are not produced by the constituents of the vaccine, but by other factors thought to generate the nocebo response, including anxiety, expectation and misattributing various ailments to having had the jab.

In view of their results, the researchers argue that better public information about nocebo responses may improve Covid vaccine uptake by reducing the concerns that make some people hesitant.

“Telling patients that the intervention they are taking has side-effects that are similar to placebo treatments for the condition in randomised controlled trials actually reduces anxiety and makes patients take a moment to consider the side-effect,” said Ted Kaptchuk, professor of global health and social medicine at Harvard medical school, and a senior author on the study. “But we need more research.”

Kaptchuck and Dr Julia Haas at the Beth Israel Deaconess Medical Center in Boston analysed adverse events reported during a dozen clinical trials of Covid vaccines. In each trial, those in the placebo arm were given injections of inactive salt solution instead of vaccine. The study did not look at severe, rare side-effects such as blood clots or heart inflammation.

Writing in the journal Jama Network Open, the researchers describe how after the first injection more than 35% of those in the placebo groups experienced so-called “systemic” side-effects, such as headache and fatigue, with 16% reporting site-specific ailments including arm pain or redness or swelling at the injection site.

As expected, those who received a first shot of vaccine were more likely to experience side-effects. About 46% reported systemic symptoms and two-thirds experienced arm pain or other localised symptoms at the injection site.

When the researchers looked at side-effects after the second jab, they found the rate of headaches or other systemic symptoms was nearly twice as high in the vaccine group compared with the placebo group, at 61% and 32% respectively. The difference was even greater for local ailments, reaching 73% among those who had the vaccine and 12% in the placebo group.

Overall, the researchers calculate that about two-thirds of common side-effects reported in Covid vaccine trials are driven by the nocebo effect, in particular headaches and fatigue, which many Covid vaccine leaflets list as the most common adverse reactions after a shot.