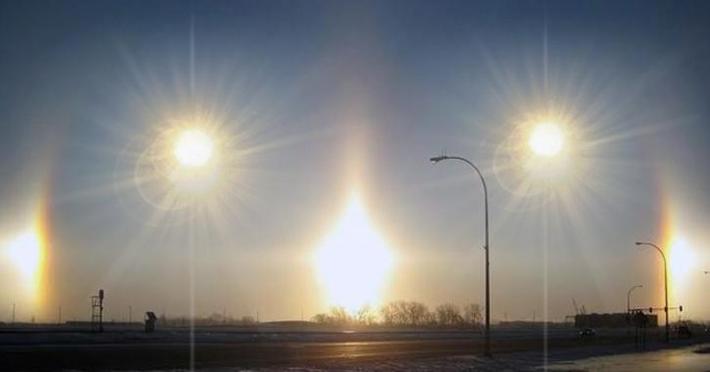 The picture shows sun dogs . Now what is a SUN DOG?

The formation of sundogs is by refraction and the scattering of light from hexagonal ice crystals suspended in cold cirrus clouds. Sometimes when the weather is too cold, ice crystals float in the air forming the sun dogs. Despite the fact that sundogs mostly form during cold weather, the presence of cirrus clouds leads to the formation of sundogs at any time. The air has ice crystals which take the place of a prism thus refracting sun rays making the sundogs appear. The sun rays bend in such a way that the side that is closest to the sun appears red while the side that is farthest appears blue. There is a whitetail that stretches horizontal at 22 degrees away from the sun. These colours are neither saturated nor pure since they overlap each other. The red and blue colours end up merging; showcasing a white parhelic circle.
The sundogs may also form in the night when there is a very bright full moon. Paraselenae are sundogs that occur at night. Another common name for it is moon dogs. However, moon dogs rarely appear. The moon dogs are rare because they can only appear when the moon is full or is very close to being full. Sundogs are conspicuously visible when the horizon is very near to the sun. The two halos of the sundogs tend to co-occur with each other forming a circumzenithal arc that is very colourful. When the sun rises higher, the rays passing through the ice crystals prisms get more skewed. Subsequently, there is an increase in the angle of deviation, and the sundogs end up moving further than the standard 22◦.
Most of the times, the sundogs appear either at sunrise or sunset. They appear as bright patches of white light. Light is the primary factor which influences the formation of a sundog. The shape of ice crystals determines the form of a sundog and acts as prisms to refract the light rays. The distances of the sundog from the sun affects the colour of the sun dogs. The angles at which the sun rays are refracted also influences the colour of the sundogs. Other planets like Uranus and Jupiter affect the position of the sundogs.
-- 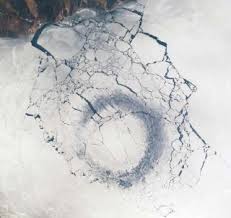 A team of researchers affiliated with several institutions in Russia and one in France recently has found a possible explanation for the creation of ice circles in Lake Baikal—the deepest lake in the world. In their paper published in the journal Limnology and Oceanography, the group describes their two-year study of the ice circles and what they learned about them.

Approximately twenty years ago, scientists became aware of ice circles forming in different locations in Lake Baikal in the spring and summer months. The mysterious circles were so large that they could only be seen from airplanes or satellites. The initial suspicion was that they formed due to methane bubbling up from below. But testing showed no methane deposits below the lake.

The lake is located in Siberia, where it gets so cold that its surface freezes over completely during the winter months. The ice circles that have been observed have appeared in different sizes and different locations—but they are all characterized by a bright center surrounded by a dark circle. Prior research had shown them to be on average 5 to 7 kilometers in diameter. They also last from just a few days to a few months. Additional research showed that the ice rings were not exclusive to Lake Baikal—some were seen in Mongolia, in Lake Hovsgol and another in Russia's Lake Teletskoye. Such sightings suggested they likely appear in most deep lakes that freeze over during the winter. But there was still no explanation for how they formed.

Determined to find the answer, the researchers with this new effort traveled to the lake several times over the winters of 2016 and 2017. On each expedition, the drilled holes in the ice and dropped sensors into the lake where the circles were forming. They also studied infrared satellite images that revealed temperature variations in the lake. In February of 2016, the team found a possible clue—an eddy had formed in the water beneath the ice circle. And the water in the eddy was a couple of degrees warmer than the water around it. The researchers suggest the ice circles are formed due to water movement and temperature differences from surrounding water due to eddy formation. The following year the team found another eddy, this one without a circle above it. They suggested that they had spotted the eddy before a circle formed above it. They were not able to explain why the eddies were forming, however.

Surprisingly, these occur more often than rainbows according to NASA. It is caused by sunlight shining through common atmospheric ice crystals with hexagonal cross-sections.

It is claimed that snowfall, combined with winds & waves, results in the formation of this phenomena. But it disappears overnight.

This lake contains saline endorheic alkali lake on the eastern side of Similkameen Valley. As the water evaporates from this lake, it leaves behind these eerie holes. Each circle is of different color, due to the variety of minerals found in it.

Here the tree look like snow cloaked monsters.This happens due to freezing temperatures and snowfall in Lapland, which is the northern-most region of Finland.

These have been mistaken for UFOs at times. The cloud formation in the troposphere occurs perpendicular to the wind direction. Gliders use it to get good lifts and create altitude and distance records.

A phenomena so rare, that only occurs only when spiders flee from floodwater or any other catastrophe of similar kind. What they do is leave fields of web. They are then capable of making a big blanket of web on vast fields, even threatening to the habitat nearby.

As the name suggests, a large hole is created in cirrocumulous or altocumulous clouds due to temperature of the water body below being too low.

It make you pause in ora esatta e fusi orari is in Antarctica. When the ice is compressed and the air bubbles are squeezed out, these waves are created. This blue ice is created because the light at the red end of the spectrum is absorbed.

An intense columnar vortex that takes place over a mass of water and links it to cumulus clouds. Looks like it came right out the Captain Planet series.

Created at an altitude of over 2 kms, these can stretch for up to a 1000 kms and have a wind speed of around 60 km/h.

This is a phenomena where fire, under very specific conditions, mostly depending on air currents and air temperature, forms a whirl effect. The Fire Devils usually last just a few minutes, but some of them can last much longer if the winds are stronger. They are wide from 10 to 15 feet and can be 30 to 200 feet tall. Occurring of Fire Whirls are often connected to the cases of bush fires, as the best known one occurred during the 2003 Canberra bushfires.

These clouds may look like there is an alien invasion coming, but they are a true example of how the forces of nature can produce spectacular scenes. These storms occur in an unstable air mass and a main condition for them to create is shearing of wind through the heights. This combination of winds is causing horizontal rotation of the air in the lower troposphere. Supercells can cause great hailstones, strong wind and tornadoes. Supercell clouds are a favourite target of storm hunters and lovers of extreme weather events. But, because of the damage they can cause, they are not at all popular in areas where they occured.

Red tide is not connected with the natural cycle of the tides, but this phenomenon is caused by a large number of algae or phytoplanktons. They collect near the surface in very large numbers. Such a phenomenon often occurs in warm waters and their large number and pigment, paints the sea red. This scene looks really impressive. But such an unusual and interesting sight is not at all harmless. Algae in such a large number are releasing their venom that is fatal to a great number of fish and other marine life, and in humans can cause skin irritation.

The Eye of the Sahara

Also known as the Richat Structure, it looks like a big wide eye, hence the name: the Eye of the Sahara. With a diameter of 40 km, the eroded dome-like structure was first interpreted as an asteroid impact. it was concluded by geologists to be a highly symmetrical and deeply eroded geological dome. The center of the dome consists of siliceous breccia, measured at around 30 kilometers.

Blue no longer stands for cool here. The Ijen Volcano, famous for its blue lava, is another of nature’s marvels. Located in East Java, Indonesia, it is a group of composite volcanoes. The bright blue color is the result of sulfuric gases burning at a very high temperature of above 360°C. As these gases come into contact with the oxygen present in the air, they turn blue.

The vivid mountains are the result of mineral deposits and red sandstone from over 24 million years ago. Layers formed on top of one another, creating the colourful patterns of rock strata.