diversification of means of visual communication.

I want to start a colloquial communication, trying to explain, to give

details in addition to unclear descriptions.

My descriptions contained relates to compositions of paintings and sculptures

containing the stimuli for viewing with two eyes.

These types of stimuli have been described before for a long time.

In the last decades has emerged Binocular Rivalry with

containing the stimuli for viewing with two eyes.

by application of stimuli in fine art compositions, deriving

variations on a theme.

valuable artwork, which decreased in intensity of communication and in that

are devalued because of the many currents and movements in contemporary

In this connection I adds some clarifications and comments relative

About interpretations or exegeses by means of bioptics

Applying the elementary stereoscopic effect in the interpretation o... 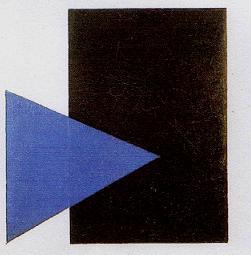 Stereograms (arranged for crossed-eye viewing)
The vertex of the triangle dives into the black field of the rectangle. 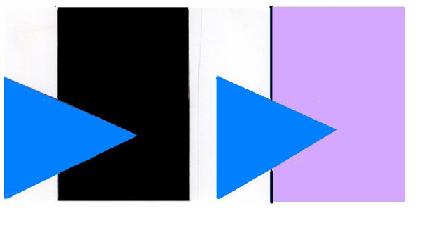 There occurs an effect of colour fusion

Figure 8.1 is reproduced a composition belonging to Suprematism

launched by Malevich, a move that has caused many contradictory comments in art criticism.

In Figures 8.2 and 8.4 I intervene, exemplifying the method of interpretation

using variants of type dioptical-bioptical art for a given composition.

To gaze with crossed-eyes of the figure 8.2 appears dominant feeling of the entrance

apex of the triangle in black space, limited by the rectangular form.

Expressing metaphorical top of Triangle, would indicate a direction by a space

devoid of matter, where is absolutely dark.

So a new version which can perform other series

Applying the graphic interpretation of the cross-eyed gaze of the variant in Figure 8.4

appears the dominant feeling, that color fusion (resulting from the combination

colors of the two rectangles).

So the resulting color appears in combinations in psycho-physiological structures:

this color can not be photographed.

Observing with, crossed-eyes is uncomfortable due to induction of relatively large differences

compared to the permissible limit for the couple  accommodation and convergence,

This limit is smaller in some people, can be increased through training.

Device for observation, which I have drawings, make visible images such

those in figures 8.2, 8.4, sitting in the same conditions which provides common stereoscopic 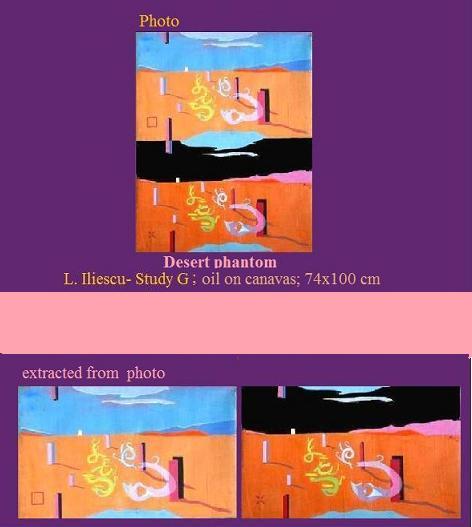 Additions in connection with several references about Kazimir Malevith

Some aspects of the work of K.M. which I highlighted,  as are about my premises.

An excerpt from the link (Le Parisien) 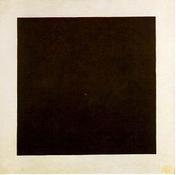 The first supremacist painting  "Black Square on White Background" was painted in 1913 by Russian painter Malevich. The context that saw the birth of the first avatar of minimalism is at the crossroads of several revolutions: The Industrial Revolution and the Russian Revolutions, that the Russian regime will go Tsarism to Communism. Such historical climate logically led to an attempt to "clean slate", reset the values ​​of art and culture.

I think the author presents an unrealistic conclusion.

is obtained from the link:

I have extracted the summary in English:

ABSTRACT: Kazimir Malevitch’s “Black Square” (1915) is one of the most recycled paintings in recent art history. More or less successfully, respectfully or ironically, artists from all around have gleefully reproduced it, ridiculed it, embezzled it and recycled it. In Russia, such has been the gravity of this phenomenon for the last thirty years, so that, it led to contemporary Russian art not being perceived as derived from Malevitch but on Malevitch. By retracing the long and tumultuous history of “Black Square” and its numerous artistic ‘reincarnations,’ this essay focuses on what these practices of reproduction tell us about the attitude of artists towards “Black Square” itself but also, perhaps mainly, about their relationship to an avant-garde with a controversial heritage of which this painting became the icon.

I extracted considerations of Malevith which I think are in connection with the effects resulting from my compositions. 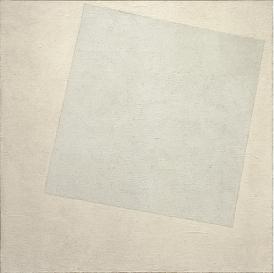 Under Suprematism I understand the primacy of pure feeling in creative art. To the Suprematist, the visual phenomena of the objective world are, in themselves, meaningless; the significant thing is feeling, as such, quite apart from the environment in which it is called forth.

In continued about pure feeling excerpt from link:

They are difficult artists. Kasimir Malevich (1878-1935), who founded what he called Suprematism, believed in an extreme of reduction: ``The object in itself is meaningless... the ideas of the conscious mind are worthless''. What he wanted was a non-objective representation, ``the supremacy of pure feeling.'' This can sound convincing until one asks what it actually means. Malevich, however, had no doubts as to what he meant, producing objects of iconic power such as his series of White on White paintings or Dynamic Suprematism (1916; 102 x 67 cm (40 x 26 1/2 in)), in which the geometric patterns are totally abstract.

The concept of pure feeling, was taken up and developed in USA,

in the '60s, of Minimalism, which appears as a reincarnation of consolidation the work of Malevich.

It is remarkable perenniality, Suprematism, although trends in the arts

decrease with time in the intensity of communication, the process is determined by the structure itself being.

In 1915, Malevich laid down the foundations of Suprematism when he published

his manifesto, From Futurism, Cubism to Suprematism.

Suprematism / minimalism / geometric abstraction (or whatever ...

Analysis of the concept  the supremacy of pure feeling  belongs experts in psychology.

I quote an important research findings obtained by using

Although I am not training to understand descriptions of publication however

I retain as significantly:

as a photo of a kinetic effect (obtained by using magnetic resonance technique).

I consider the hypothesis that the kinetic effect occurs with greater intensity, in the case

when we find contrasts   such as alternating sensation awareness.

About contrasts in fine art; link:

I remember the definition of the effect of binocular rivalry.

Binocular rivalry is a phenomenon of visual perception in which perception alternates between different images presented to each eye.

A sensory effect of higher intensity

or from observing normal to monocular stereoscopic observation

View sensorial effect in the transition from normal observation

to  observation with  crossed-eyess (on application "Black Square on White Background" ;Malevitch)

Applying the elementary stereoscopic effect in the interpretation o... 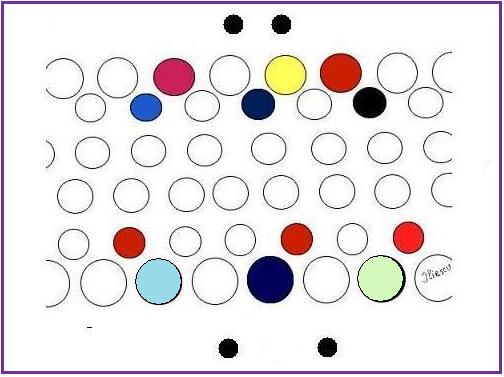 Binocular-rivalry kinetic contrasts are obtained from cross-eyed gaze of the sketch.

Applying the techniques that I propose

fine art compositions are obtained, which is within artifacts that aesthetics

it find useful and pleasant disinterested.

If these types of compositions are used in psychotherapy, therapist will track the behavior of patients subjected to tests and will choose the efficient combinations.

A selected response from comments (with additions)
I love your sensation about Bioptic Art (the possible art for both eyes)
For me it also has the value of confirming some techniques.
Composition, graphics, something that exists, whatever it is that I report to my senses. (binocular rivalry, colored fusion
Helmholtz: Specific Stereoscopy - Elements ....)
About conposition> is the second term of a supposed binom.
Also, how do I develop composition (in the second term) to reflect emotionally in the first term (including variation comments on a theme.
This binom is actually the well-known way to compose, but important techniques are, of course, the techniques applied.
I have numerous publications in ResearchGate Iliescu Liviu and
ART LAB science litt.

An important interest in the information, regarding at least the trends in the development of a domain, results from the criteria

automated Google, which presents, as the case may be, giant selection files, fluctuating as the number of results.

So I recently registered for the chee words: Here consciousness; issued for eternity at a point in the physical universe,

palpitating point that tends to zero.

For perspective on art for Both Eyes (Bi-optical Art) 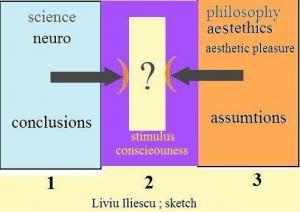 are in the experimental stage.

Until now there was not to the attention of art critics.

For guidance I recommend the selected bibliography of Google