For information and thematic development

see the field in who enroll my publications:

Opening chapters in culture (with important innovations) are promoted (usually) with, difficulty, because they can not be classified, not formed yet experts.

To confirm the effects of  dioptical-bioptical I called and got a patent for novelty means that I support.

the author is obliged to make

Even in this case it is difficult to establish title to the patent to be classified.

Referring to confirm the effects obtained through my studies 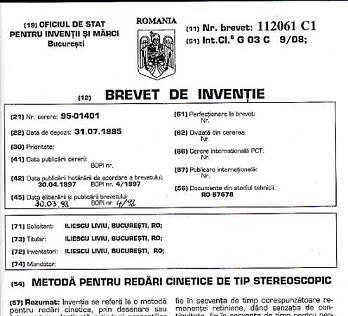 I participated with my patent 112061 OSIM Romania to: 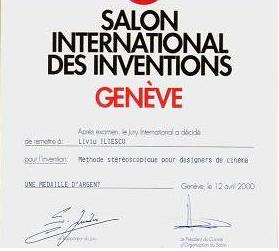 effects which I claim.

We presented patent badge below, which provides a graphical summary of the patent. 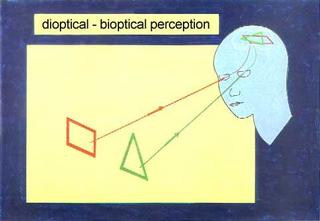 One of elememtele presented the jury is program 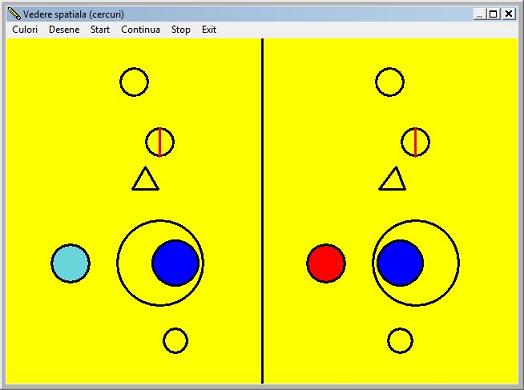 (arranged for crossed-eye viewing:  one sees this image from far

Computer program and implementation were made by ing. Ralea Daniel 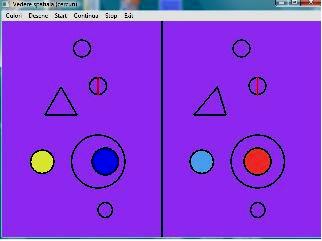 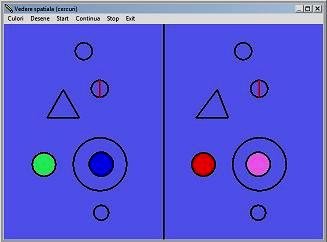 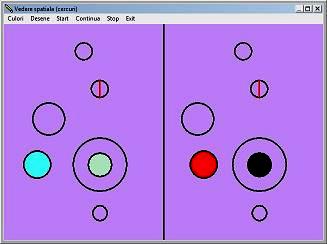 Arranged for crossed-eye viewing; each version will be seen separately

In films and TV shows continuous movement through visual hysteresis.

In the program, DPAC, I introduced intervals noticeable. May

making the assumption that being react more strongly to novelty.

initiation for computer use.

All techniques resulting from claims of patent no. OSIM 112061 Romania

can be used for free. My goal was to confirm the effects of experts from

the institution that granted patents

I recommend these images, obtained with the method DPAC, (see above)

for training and initiation in Dioptical-Bioptical Art

Also I bring this program to the attention of researchers from fields:

I suggest these applications as a result of communications from:

The phenomenon of binocular rivalry is has long been known.

Robert P O'Shea has published an extensive bibbliografie  as the basis

for developing the field of Binocular Rivalry.

In the book published by me:

I use this bibliography, extracting data to describe

historical development of the field of Binocular Rivalry

In my publications, I have used the somewhat traditional terms retinal rivalry and colour fusion, borrowed from the studies of Herman von Helmholtz, published in Handbuch der Physiologischen Optik(Leopold Voss, Leipzig, 1867). They were translated in 1925 as Treatise on Physiological Optics (editor J.P. Southall, Dover, New York).
Binocular rivalry is a field which has aroused the researchers` interest in the last three decades, especially in psychology and neurology.
Randolph Blake lists more than 140 references in his study A Primer on Binocular Rivalry, Including Current Controversies, published in "Brain and Mind" in 2001. Sixty percent of the titles were published after 1975. [Figure 2.1 of this chapter is reproduced from Blake`s article.] Blake briefly reviews the main contributions, starting with J.B. Porta`s De Refractione. Optices Part. Libri Novem of 1593, quoted by N.J. Wade in 1998 in A Natural History of Vision.
In order to follow up the historic itinerary of studies on binocular rivalry, I will also refer to Wade’s monograph.
- Le Clerk (1712) pointed to the binocular rivalry with colours.
- Dutour (1760, 1763) clearly describes the binocular rivalry of two colours with contour. He also describes the fusion with the naked eye, by eye convergence or divergence. This modality of observation was resumed in 1990 by Christopher Tyler in the autostereograms invented by him and popularly called "Magic Eye". 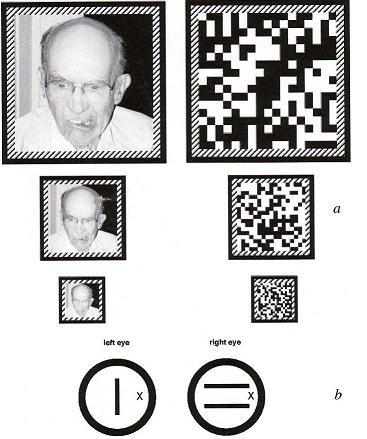 They have no artistic content and are not compatible with traditional compositions.

In dioptical-bioptical art I made, artistic adaptations, applying stimuli to the type

This method I used in painting Study M.

I have published the description and photograph of Study M, in 1987 in the article:

the movement of an object.

In connection with the crossed-eye viewing I make the following observations:

in research that is undertaken must be taken into account

and accommodation of the eyes.

Bioptical art, convergence and accommodation of the eyes, accuracy ...

In which I propose techniques can change (adjust) the difference, from crossed-eye viewing,

to getting normal contemplation (required for applications in fine art)

Through regular contemplation, I consider annulment variances for a reference plane

such as painting plan. 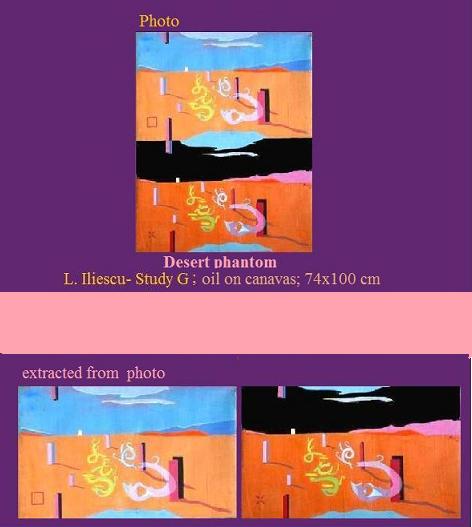 In accommodation-convergence, which departs the observer from 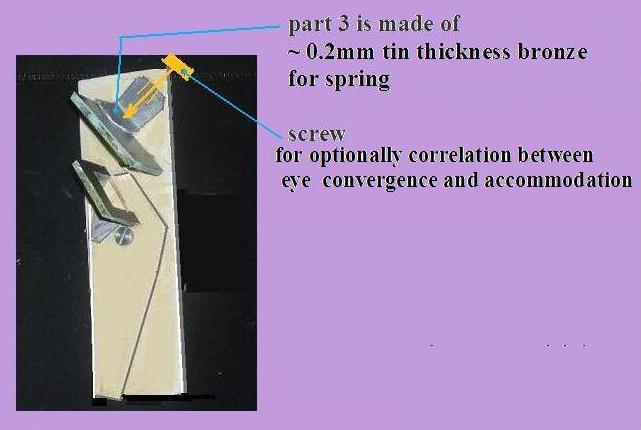 This device can be used to monocular whatever kind

or computer no need other means intermediate)

An observation about the efficiency visual communication, using fine art

Of course it is important to ensure the evolution of the technical knowledge in fine art,

but I believe that the assessment should be made primarily in connection with induced emotions, such as

the intelligence component    may be dimmed (psychic life).

At present the research that shows updates that can not be

placed in existing classifications of culture, I believe it is recommended to consult

As is known hue pairs apart, such as blue and red

A result of my studies possibility that in, forms relatively small, to combine these 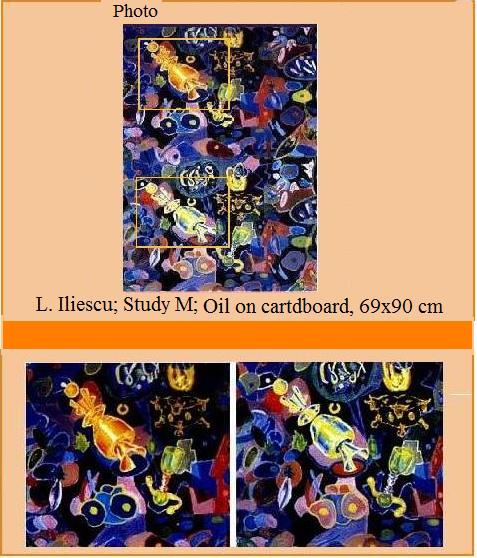 COLOUR FUSION WITH MARKS Psychic response to watching a coloured biform (a form for the left eye and another one for the right eye, having different colours), when in the coloured fields a mark of the same colour is inscribed; a line or a spot of the same colour, but different from the colours of the two fields). Coloured marks result in the perception of a resultant colour. In some cases rivalry fluctuations are ruled out. 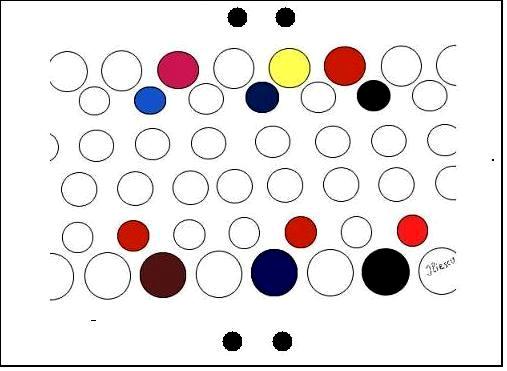 Liviu Iliescu – Binocular rivalry, Colour fusion helmholtz and Stereoscopy; Bioptical Art 1998
Should be viewed with both crossed-eye and parallel view 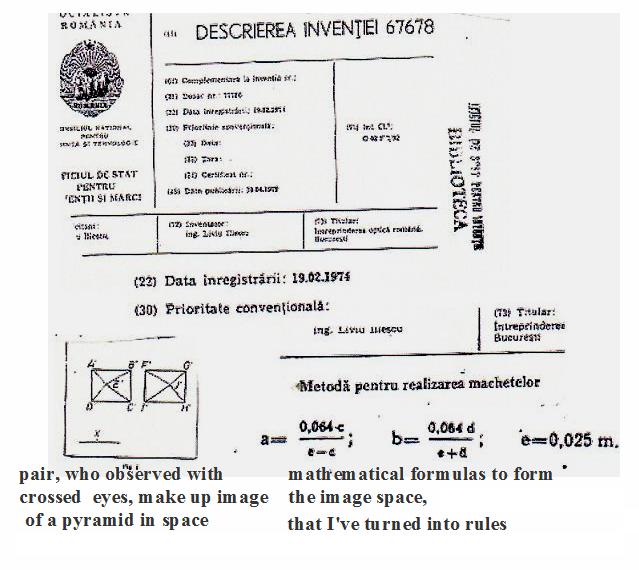