Experiences for compositions of fine art forms in space

Proposals are in the experimental phase.

I considered as shown in figure 8,9 bi-optical causes hallucinatory! effects

making its synergistic action in examples of fine art compositions, stimuli that I called bi-optical

Applying in fine art my knowledge of optics, I insist in

These techniques would be of interest to artists and researchers in science.

For references I posted the following keywords, resulting sites:

Subcortical discrimination of unperceived objects during ...

We used binocular rivalry to present stimuli without conscious awareness, thereby eliminating the IT object representation and isolating subcortical visual input to the amygdala. Functional magnetic resonance imaging revealed significant brain activation in the left amygdala but not in object-selective IT in response to unperceived fearful faces

Appears alternately portrait or mosaic at intervals of ~ 5 seconds.

At this time, without intervention, produces a mixture of the two images.

[PDF]Identifying Hallmarks of Consciousness in Non-Mammalian ...

I communicate a new type of object intended to be considered

as part of the class fine art compositions,

artistic object that could be called Bi-optical Sculpture

In what follows I fill explanations about  bi-optical sculpture, describing

Elements, the composition forms (sculpture), are such that when viewed by

bi-optic device occurs the feeling that the depth increases tens of times,

I agree that believes that any new way that induces

dominance of visual communications sensation must experienced in perspective

of taking over in science and art movements.

Compositions of fine art in which it would be possible observe the ...

stimuli that are applied in the fields,  binocula rivalry, color fusion, stereoscopy,resulting the composition

shown in figure 2, in simplified form. sd; Ss; spaces that will sit forms with bi-optical effects

at, distance in depth relative to the vertical plane

they are placed Tc, Tc.

C-C, D-D; conical space for conventional sculptural forms, with the base

than the real distance between planes Tc and Td-Td-Tc 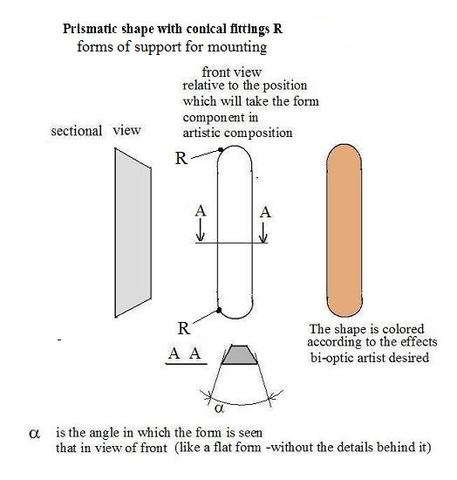 Scheme executed at the scale for positioning sculptural forms

in  the composition of space 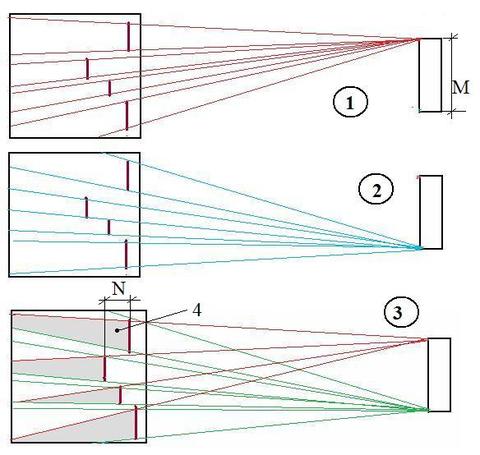 when it can sculpt shapes developed without restrictions;

to decrease the length M (space observatory) grow all sub-spaces denoted by 4;

when looking through bi-optical device, the real depth of N,

appears transposed in virtually with the depth of tens of times higher. 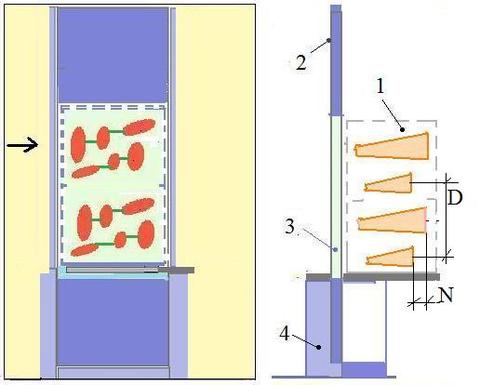 Option for displaying in exhibitions; 1- sculpture;

2- screen, which has the window indicated at 3, to produce contrast in observing by bi-optical device,

window in which it is possible to intoduce a glass filter (stained glass), depending on

The distance D is increased according to increasing distance N, thus the pair components

be observed with the same angle. with paintings, and through bi-optical device will notice the increase of ~ tens of times

depth, in, the virtual space

The settlement on horizontal the fields to see with eyes crossed bi-optical effects: This composition represents variations on the theme  Hirst's spots

We know about "variations on a theme" in music. Variations are introduced in a certain theme in point of melody (to a certain extent), rhythm, relative values of the notes, harmony. Some composers are known to revive the works of other musicians, as a homage. It is also known that composers use to introduce cadences of their own in the concertos created by others.
The bi-optical art permits to introduce similar modalities, as I shall show in the following lines. Many compositions of the modern plastic art succeed in conveying only a little of the artist's sensitivity. They have a high entropic degree. Art critics try to cover the distance between the artist and the recipient subject. I provide the opportunity to introduce in well-known compositions a different type of wordless comments, with the help of bioptical means. They may complement known types of visual psychotherapy with beneficial effects. 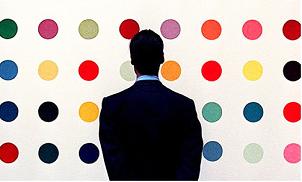 I have described constructive details relative to   optical composition, in:

I adds completions regarding some geometrical characteristics 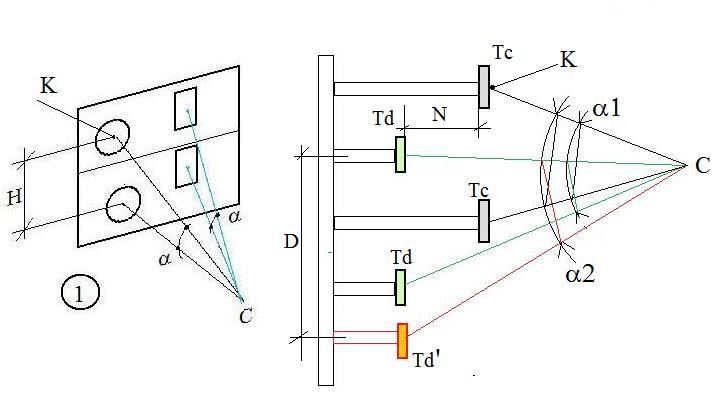 vertically at the same distance H,

(between centers K; ~ of gravity) so that they are seen with the same angle α.

In bi-optic sculpture, shown in figure 7, increasing the depth virtual

is done by introducing in sculpture conventional the

In  bi-optical culpture distance varies depending on the distance N,

so that from C (the place the observer), the angle of observation, shapes,

Tc-Tc to be equal to the angle of observation   shapes of Td-Td, resulting distance D.

The angles are equal when the two chords, formed in the circular arc α2, are equal

Differences are tolerated at angles up to 0.25 deg 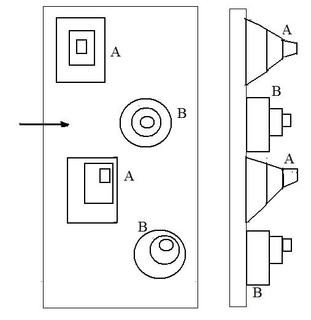 Applying the method of Figure 14 can compose complex sculptural forms,

eg pyramid trunks and cones trunks  B, and

I deduced this form but I have not experienced this; I do not have

Course can be designed computer programs, and possibly mechanical processing on automatic

I believe that these methods are helpful, but it is recommended that artist

sculpt using traditional techniques, step by step, so that he felt every moment

as is confirmed by its artistic sensibility 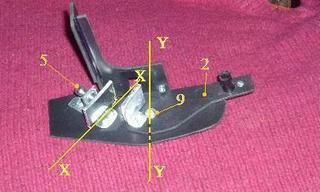 1 the plate the base

2 lever by turning, getting vertical movement of the right eye image

7 diaphragm; piece that contains a form to support the forehead.

When observing a disorder, to the overlap images  the rotation screw 5

around the axis XX, which is in the plane motherboard 1,

In over 50 years of study I created several variants of devices for the contemplation of bi-optical images.

This is the latest design.

I will distribute free to people who want to apply bi-optical techniques.

If there are numerous requests, for obtaining such devices, I have to recommend a professional workshop.