The nature, the wind and the stars included in the compositions of fine art

Alexander Calder (/ˈkɔːldər/; July 22, 1898 – November 11, 1976) was an American sculptor best known as the originator of the mobile, a type of kinetic sculpture made with delicately balanced or suspended components which move in response to motor power or air currents. 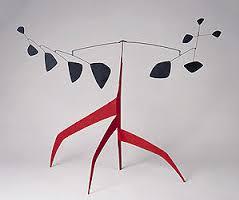 The fulcrum of the sculpture (part, in motion above) as component shapes

is located above the center of gravity thereof.

Even at low intensity drafts forms, it moves.

Thus we may consider the air in motion is included in the composition.

In connection with the application of stimuli of nature in fine art I have several publications.

I present a synthesis of the link:

I reproduce part of this synthesis.

Some of my proposals are inspired by drawings of Constantin Brancusi,

which he called Relativement tel que moi which would translate

Relative to my conscience.

Famous Brâncuși works ………Bird in Space (1919) and The Column of the Infinite (Coloana infinitului), popularly known as The Endless Column (1938). Considered a pioneer of HYPERLINK "http://en.wikipedia.org/wiki/Modernism" \o "Modernism" modernism: Brâncuși is called the patriarch of modern sculpture. 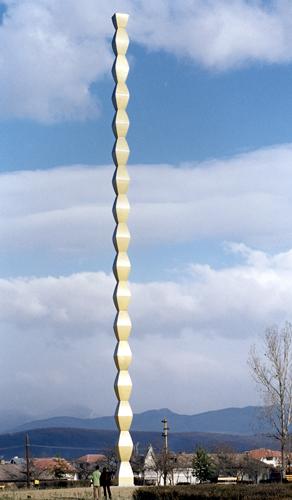 The Column of the Infinite 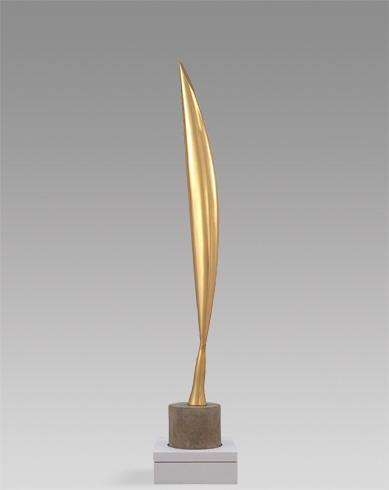 Bird in Space (L'Oiseau dans l'espace) is a series of sculptures by  Romanian sculptor  Constantin Brancusi The original work was created in 1923. It was sold in 2005 for $27.5 million, at the time arecord price for a sculpture sold in an auction.[1][2] The original title in Romanian is "Pasărea în văzduh."

Magic Bird is a bird symbolic or allegorical of a Romanian mythology.

Transfer that Brancusi made ​​the fairytale artistic reality space

sensing as super speed, shapes occurring in the next decade .... techniques!

The Magic Bird, self-launches from upright to heaven, and for proper

fly with the speed of thought has a special aerodynamic shape, with surprisingly small differences from technical supersonic flight, but deducted form of Brancusi's artistic sensibility.

Both the infinite column, and the Magic Bird, I think that it adds to the composition extrasculptural space, to infinity. 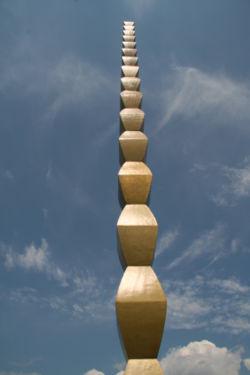 Endless Column seen near the base

I propose a monument that contains the form 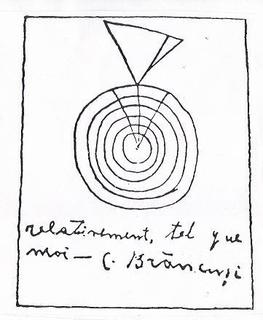 Sketch was found among his papers Brancusi, a sketch which caused different assumptions about the intentions of the artist.

It would be possible interpretation:

Thus triangle (pyramid) appears as a collector cup strongly connected through three lines, through the whole circular forms (seven heavens of Faith) by middle-point circle which would represent consciousness.

The shape RETQM which dominates the monument will not be altered constructively through different interpretations.

In addition to contemplation may be the stimulus for meditations heightened

this heavenly body image in the center of the monument.

I present solutions to the execution of a  monument that contains the project (sketch) of  Brancusi, plus and an optic-mechanical automated to bring the center of the monument, in turn, the image of a star (Venus, Sirius ...... Sun, Moon) center where Brancusi probably thought it would be be represented consciousness. 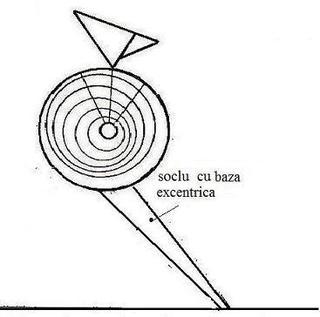 Monomentul will appear to look in the face with RETQM form.

At the sight of his face in a particular place, the front will appear in a plan, with the sky background.

In front sight base should look like RETQM float.

During the design of the monument artists will present alternatives.

The center circle will be placed on a spiral, avoiding similarity RETQM with test design for rifle shooting training. For the front to appear a plan shapes

RETQM component must be converged. We draw using elementary calculations. 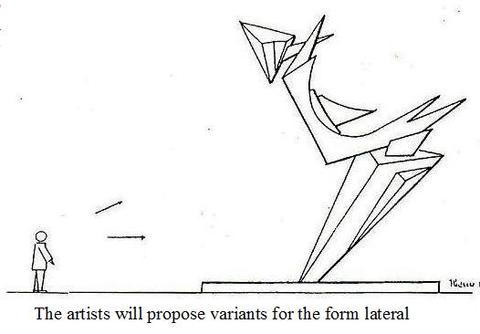 and other art forms while preparing the documentation for the execution of the monument.

From my experiments resulted as possible as part of a form in space be composed so as to appear without the third dimension (2D), when viewed from a certain place. When the observer moves around the shape it will be seen, of course, the gradual emergence of form components in space. 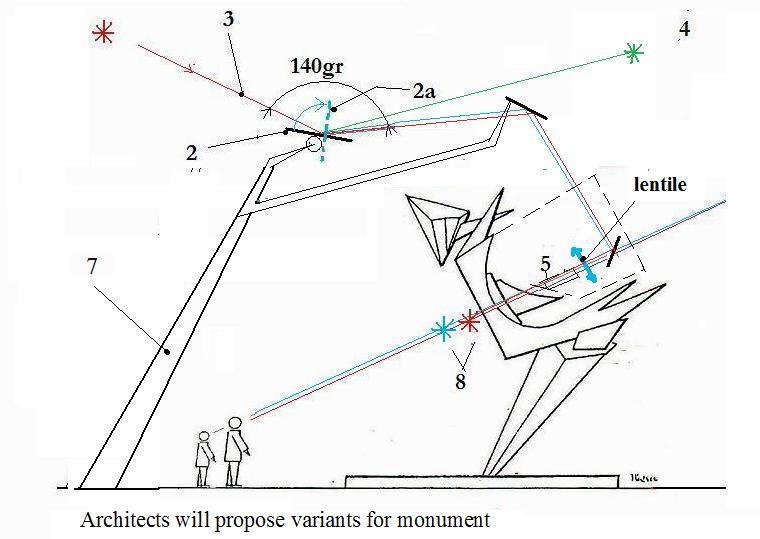 In position no. 2 is a type equatorial mirror mechanism that compensates for diurnal movement so that the image of a star

be seen throughout its apparent movement in the sky -140 degree-

(this is a variant constructive - see the variant of  www.binocular-rivalry.ro  chapter “13. Visual binarity” )

In position no. 8 using the program, you will see one new star (Evening Star, Sirius ...) selected by operating the automatic orientation mechanism. 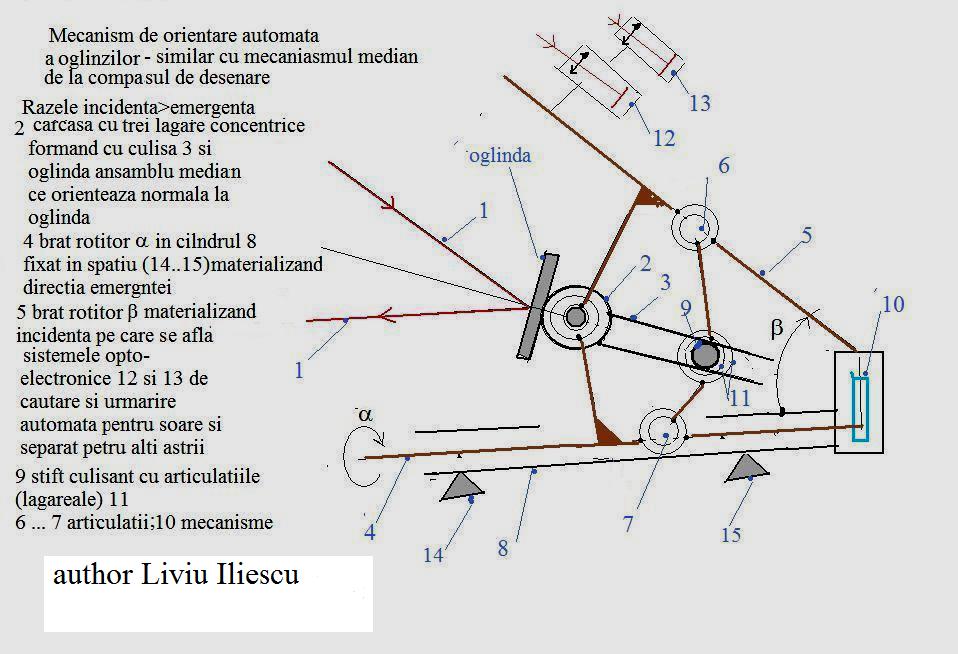 A company at the request of the undersigned, presented a preliminary offer to execute the monument (8 pages). Experts have confirmed its ability to adapt to unite automatic mechanism for the selection and automatic pursuit of a star, in turn, automatically.

I have made ​​a preliminary draft of the monument and we asked for an offer for the construction of a specialized company.

To date no funds have been allocated for the construction of the monument.

Events and some additions.

In the 90s of the twentieth century Liviu Campeanu  asked me

to write, as a specialist in systems and optical devices,

an solution to build a monument to

men of culture and specialists in development projects.

I considered interesting theme and I made ​​two versions

which we published two chapters of the book

I implemented on the Internet these chapters in

Liviu Campeanu published in the book

a series of documents proceeding from his efforts, along with

in which I proposed solutions for building RETQM

I am quoted by L. C. incorrectly, on the other hand copy text and

figures from my book,   without quoting me.

Liviu Campeanu not possess the technical knowledge to imagine

construction mode to see RETQM form with the sky background

About this event that I still adds some

Of contents I extracted sketch 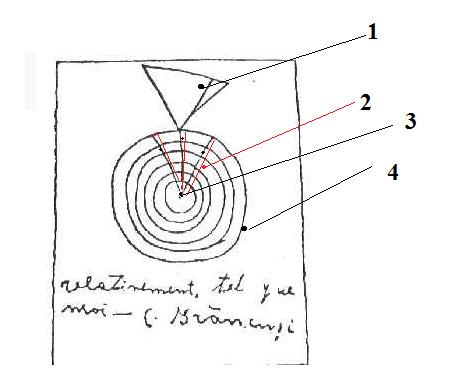 I remark, robust connection between inverted pyramid and the center

composition. In the drawing above I adds red lines denoted by 2 ,

that I remark how Brancusi noted how technically to

I sketched and named Psychodrom a composition that includes dominant sensory stimuli from nature. 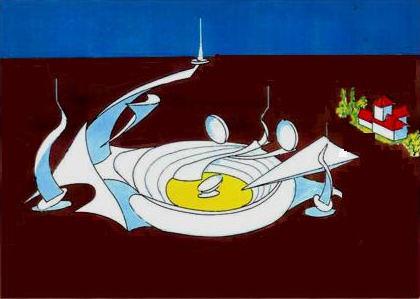 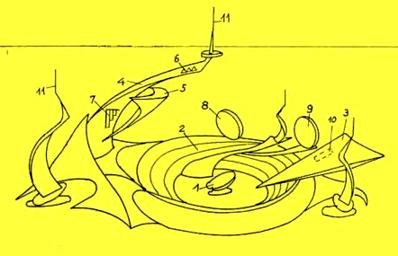 The PSYCHODROME has two components:
- Psycho-A, that is functional statuary forms, liable to capture, amplify and reproduce stimuli from the outer world.
- Psycho-B, that is a group of areas comprising facilities for bioptical images for interhuman communications by means of sensory pathways.
PSYCHO-A
The idea of creating a functional monumental complex for the capture, amplification, and reproduction of stimuli from the surrounding world has originated in an enigmatic drawing by Constantin Brancusi, entitled "Relativement, tel que moi" (figure 7.1), which may be translated by "In a way, this is my self". The upper triangle gathers aethereal fluids from above and by means of concentric circles focuses them on a central point, which symbolizes the self.
The following suggestions have started from the idea of collecting multisensorial stimuli from nature, in order to concentrate them in a unique place, fit for getting in touch with the universe.
In cloudless nights, a viewer standing on the look-out platform, has the star-studded sky above him and underneath, the images of one star mirrorred by the reflectors of the amphitheatre and the bright spot of the central table. He is sure to feel lonely in the midst of the Universe, as if he were in the proximity of a galaxy. The monument should also comprise outstanding specimens of the human creation... To be sure, unimpeded creation has soared to artistic peaks. Yet, fragments of the laws of the Universe, emphasized by unique representations, evoking stimuli for inner responses - either petrified in the form of amphitheatre or columns, or time-modulated (optical, sonorous effects) - are also leading to climaxes which decisively contribute to the widening of the spiritual domain.
This monumental ensemble (figures 7.2 and 7.3), devoted to contact the outer world, comprises: a table (1) made of hard (maybe opalescent) material, with a polished surface (with calculated concavity), aimed at reflecting heavenly bodies; an amphitheatre (2), with several tiers disposed in a circle or ellipsoid (boasting elements with white edges and dark surfaces); a sloping surface shaped like a triangle (3) and farther, to the southwest, a wooded area; an arched structure (4) with a look-out platform (5), hanging over the architectural ensemble to watch effects resulting from the described elements.
On the upper part of the amphitheatre, there may be placed columns (if they are architecturally suitable) or at least some salient structures with reflector elements.
Reflector optical systems, scattered throughout the amphitheatre in a spiral-like arrangement, will simultaneously reflect a certain star, at certain calculated moments. Onlookers will have the impression that a galaxy is shining on the earth.
The arched structure (4) comprises groups of prisms (6) projecting coloured images, "painted by the very sun", on certain spots of the monumental complex. The arched structure is also endowed with organ pipes (7) for Aeolian music, whose sounds may be randomly modulated by wind-operated flaps. This music is amplified by a concave-ellipsoidal sonorous mirror (8), while a paraboidal sonorous mirror (9) is designed to collect "the whispers of the world". Other solid optical items, specially calculated and mounted in the look-out platform of the arched structure, impart an impression of "floating" to the viewer who looks through them at certain mosaic or sculptural elements (10).
Protection lightning-rods (11) are supplemented by others, which provide a genuine display of corona-like luminescent electric discharges, likely to be seen during storms and especially by night.
To carry out this project, a wide team of engineers, architects, painters, sculptors, astronomers etc., is necessary.
When designing the monumental ensemble, a functional small-case model should be made at first. A pilot station will then be erected, to test the components aimed at capturing and amplifying the stimuli from nature.
PSYCHO-B
Special areas arranged within the monumental complex are sheltering exhibitions of plastic arts, including bioptical compositions (paintings and sculptures), worked out by means of the techniques described in other chapters.
PSYCHO-A and PSYCHO-B make up the so-called PSYCHODROME, which may be a complex ensemble, a place for contemplation, meditation, getting closer to God, both by enhancing the relationship between Man and the Universe and by arousing latent emotions, stimulated by bioptical means.
Irrespective of the religion by which man acknowledges the divine in the surrounding world and in himself, irrespective of the supreme being he worships, no matter whether he prays in a temple, cathedral or mosque, places which will always be hallowed for him, he may still come here, in this new monumental complex, like a pilgrim, to meditate on the miracle of his existence.
The contemplation of the outer universe and the awakening of latent sensitivities do no harm to religious feelings or to worship places, as each religion in part remains eternal.
The psychodrome could turn into a place for joint worship, acquiring different attributes and meanings, according to the interpretation of revelations by each religion. In this respect, the psychodrome may become a temple for the 3rd millennium.
Frithjof Schuon, Despre unitatea transcedentala a religiilor, Ed. Humanitas, 1979.[ The Transcendent Unity of Religions, 1953] A corollary to the subject-matter presented in that book may be the synaesthetic plurifunctional complex called by us "Psychodrome". Seeking by means of affective paths in the outer and inner universe might get us even closer to a econciliation with our non-being.
Moreover, atheists or people who reject any connection between the psychodrome and their places of worship, may find here a place to meet long forgotten forms of the universe.
It may also be incribed among special means for psycho