And the attention of Professor Randolph Blake and Professor Robert P. O'Shea.

These teachers have developed a prodigious scientific activity theme,  Retinal Rivalry consolidated in the nineteenth century.

Thus under the new name of  Binocular Rivalry (most appropriate) have largely conribuit that their research will lead to the definition of a new chapter Neuroimaging.

I consider it appropriate to introduce something from my attempts to deduct,

It's about what we know, the need for physical life to

It seems that in my studies, as well as others who have similar interests,

I quote, in this sense, the book of JP Sartre.

I as a specialist I worked for over 50 years, applying  binocular rivalry in fine art

Thus I did managed to establish techniques for making composition using phenomena, especially those that appear in colored fusion junction.

I present below examples.

in the remark section (link):

I have the pleasure to communicate you some data for the types of compositions that I use,

tests of binocular rivalry and fusion colored, with the hope that it can benefit from your expertise.

The aim is to use these images in visual psychotherapy.

To enter ways of using, binocular rivalry in visual therapy would be desirable

to stimulate creation for talented artists to relize efficient compositions.

can help them do substantial increase efficiency.

Maybe it would be desirable to start with a group of students.

but can support interactive ways to make possible the transmission of technical,

information for techniques that otherwise would be lost.

My techniques do not contain digital programs.

I feel like playing stereoscopic space elements is necessary

to be done manually, according to the rules and not using digital programs that

so always carrying his creation to be confirmed by his own artistic sensibility.

To check my proposals by specialists have applied for a patent for invention which I aordat.

See an excerpt from my publication:

Thus we obtained the patent (link):

In these offices propose to use and images

Draw attention to a type of image resulted from my research

an image type which I claim: 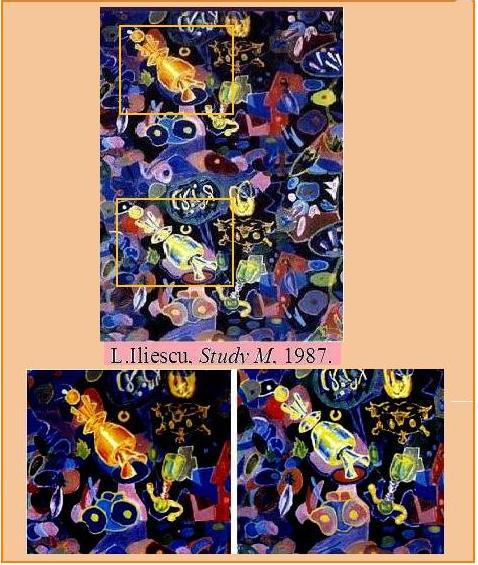 The settlement on the vertical the components can be observed with

On cross-eyed observation is obtained from the square image

but getting color fusion 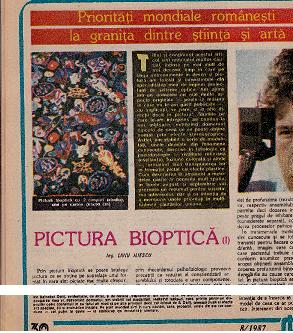 PSYCHOPHYSICAL MIXTURE OF COLOURS Psychic response to the projection of different colours on the two retinas, known as "colour fusion". The response is fluctuating since one perceives now a colour, now another one. However, if lines or spots of the same colour are placed on differently coloured backgrounds, the psychic response is largely constant: a different colour with hazy nacreous hues seems to stand apart from the background. A cloisonné-like contour is the result of my bioptical experiments. 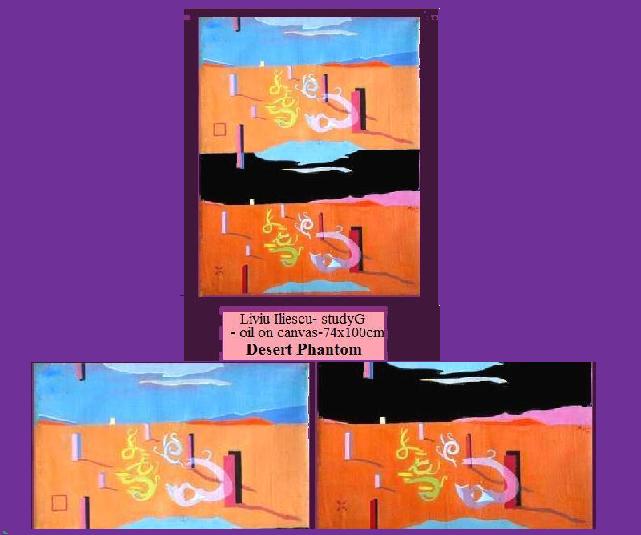 Color Fusion, and on the other side and limits the phenomenon of Binocular Rivalry 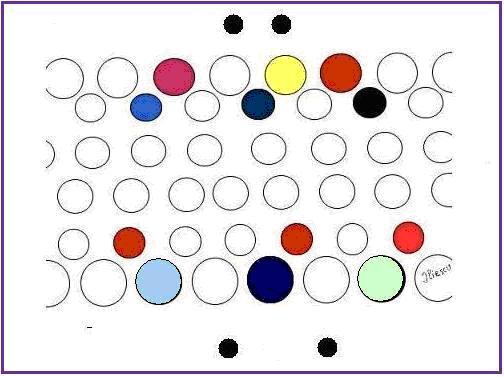 For documentary posts and keywords: