Painting with a computer! 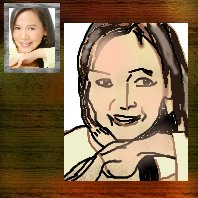 Okay folks, once again, I have something to show you, this is JUST a work in progress, the point of which, I wanted to show some of you the difference between real life painting and painting on a computer , which in this case, isn't much of a difference because I am approaching the painting in the SAME way I would if I were using acrylic paints, which is what I like to paint with. My goal here is to maybe open your minds to the fact that a computer isn't art in a box, or just special effects, it can be a tool, like a brush, and used as such. Now, I want to make another point, if I approached the painting in the sense of making a portrait from a photograph, I could just use the photo as a starting point and posterize it, which I will show you later, but for now, these are the starting images I have, the first, is just like an easle, with a photo attached, (with glue) to look at as I paint. I simply make lines to indicate where colors will be, and some light and shadow, not worried about form yet, the modelling comes next. 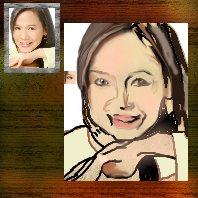 The 2nd picture starts the modelling, where I use the mouse and a smudge brush and just push the colors around until they suit me. Both of these pictures have been resized to fit in this blog, without taking 2 hours to download for those of you with dial-up.(like me)

This third pic I begin filling in the color and pulling shapes together. 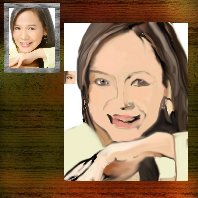 Comment by Jeff Dinan on September 17, 2009 at 6:17pm
Still needs some work, but I am done with the article, lol, I will have to refine how I approach painting like this, this was first attempt, I really have problems when the subject is nice to look at, I seem to tend toward the darker side so it shows in my work, not that I am a dark person, I have the Light, just working on showing it.. thanks for comments! 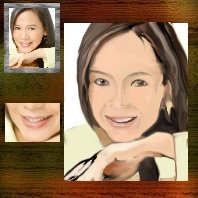 My gosh, this is hard! I have to admit, this is the first female portrait I have done, I can do the hard lines of men, but this soft, dainty stuff is tough! And getting the shapes right???? Argh, well, it is art, lol, and I hope forgiving, this is the latest, and I am determined to finish it now! Let me know what ya'll think, specially the portrait painters...