Now we have white and yellow fungi to deal with

When I was doing my PhD a few years back, one of my seniors gave one of her kidneys to her dad as both his kidneys were damaged. The kidney worked well. But still her dad died six months after the surgery. Why? A fungus attacked his vital body parts and spread to his brain. The immunosuppressive drugs he was taking to avoid the rejection (of the kidney my senior colleague donated) messed with his immune system. When you have a weak immune system, opportunistic organisms attack you. The same thing is happening with covid patients now.

White Fungus infection is more dangerous than black fungus infection because it spreads rapidly and affects lungs as well as other parts of the body including nails, skin, stomach, kidney, brain, private parts and mouth.

Doctors who treated the patients said that white fungus also infect the lungs and an infection similar to COVID-19 is detected when HRCT is performed on the infected patient. Patients of white fungus show Covid-like symptoms but test negative; the infection can be diagnosed through CT-Scan or X-ray.

All the four persons infected by White Fungus showed coronavirus-type symptoms but they were not COVID-19 positive. But their lungs were found infected and after tests when they were given anti-fungal medicines, they recovered.

Just like Black Fungus, White Fungus is also more dangerous for those who have weak immunity. Diabetes patients and those who are taking steroids for a long period of time are more at risk of getting infected with White Fungus.

COVID-19 patients are more prone to white fungus as it affects the lungs and similar symptoms are created like that of coronavirus.

Those who have weak immunity like diabetes, cancer patients, those who underwent organ transplants, and the ones who are taking steroids for a long period of time must take special care as they are more at risk. It is also affecting those coronavirus patients who are on oxygen support.

Additionally, the white fungus infection may be risky for pregnant women and children, as per reports. Hence, proper emphasis should be laid on sanitization and cleaning of supplies, environment, since moulds can be directly inhaled by a suspected patient.

According to the doctors, the White fungus infection begins from the tongue or private parts, due to which it turns the tongue white.

When I heard about black and white fungal infections, I knew other colours are too coming because fungi occurs in different colours.

I saw innumerable colours of fungi. Let me show you some of them: 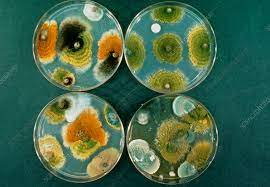 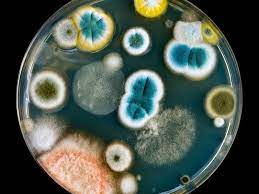 Like I have guessed, now we have yellow fungus infections in Covid patients or covid-survivors.

Like most fungal infections, this is also primarily caused by unsanitary conditions, such as poor hygiene, contaminated food/ oxygen source. Overuse of steroids and antibacterial medications can also cause the disease. Patients who have comorbidities or are on immuno-suppressants may be at a greater risk of contracting the infection.

At the onset of the infection, patients may experience lethargy as it spreads internally, affecting organs and draining people of energy. Patients may even lose appetite or develop poor eating habits, which may eventually result in unusual weight loss, coupled with poor metabolism.

In some cases, Yellow Fungus may affect the eyes of the patient. In that case, one must watch out for redness and sunken eyes.

While we continue to learn more information about the same, doctors have suggested that a yellow fungus infection could be much more dangerous than black and white fungus cases, and requires attention from the very beginning, since it is an infection which can cause heavy internal damage.

A yellow fungus infection, much like other fungal infection spreads via contaminated environments, or when a suspected patient inhales moulds (mycometes) which grow in the environment. Poor hygiene and unsanitary conditions remain to be the prime reasons for infection.

Since the damage caused by the infection is said to be much more dangerous and severe, experts now warn people to start recognizing the infection from day 01 and seek help.

Yellow fungus or other fungal infections being talked about right now aren't exactly contagious, since they cannot be spread from person to person like other respiratory infections, including that of COVID-19.

Depending on your health and risk factors, yellow fungus infections can strike as a primary or secondary infection. However, from what has been evidently seen so far, the risks continue to be aggravated for those people who have compromised immunity, frail health or suffering from pre-existing problems like uncontrolled diabetes, high cholesterol, which cause inflammation and reduce the body's ability to fight off infections.
As seen with COVID-recovered cases (or those in the middle of recovery), a rise in fungal infections has been reported amongst those put on prolonged oxygen support, or have been prescribed steroid use. The use of steroids have now come under scrutiny from leading medical authorities.
It can also develop on the skin after the fungus enters the skin through a cut, scrape, burn, or other type of skin trauma.

As per available case studies, following are the broad symptoms of yellow fungus infection:

Why is it more dangerous than other fungal infections?

From what has been seen right now, one of the reasons why a yellow fungus infection acts out differently to white fungus or black fungus is the way it spreads. Since it spreads internally, it can cause heavy internal damage and hence, more 'severe' in nature.
For the same reason, people have been advised to seek treatment from the very beginning and prevent the case from becoming complicated.

How can people protect themselves?
What we must remember is that we are only beginning to learn information about the new infection. However, like with any infection, one of the best steps to take is to safeguard your health.
Compromised immunity helps fungal infections thrive. People suffering from uncontrolled diabetes, or with a history of diabetes should be doubly careful of keeping their blood sugar levels under control.
As for patients battling COVID-19, since one reason for the spread of these hazardous moulds is unsanitary environments, one must ensure that proper disinfection is followed.

Those on oxygen therapy should also ensure that oxygen is well-filtered and not contaminated (such as with unclean water). Indiscriminate usage of steroids and related medications should be curtailed.

Additionally, doctors and specialists recommend that any at-risk patient not expose themselves to the risk unnecessarily, follow proper mask mandates, and maintain personal hygiene. Wearing clothes which do not expose the skin to probable contaminated surfaces may also go one step further to protect you.

PS:  People use black, white and yellow fungus to refer to mucormycosis, aspergillosis, candidiasis and cryptococcosis.

You will find information on black fungus here:

Qs based on this article:

Q: Are there any peer-reviewed papers on this subject?

These fungal infections are not new. Only thing is these fungi now got a new opportunity in the form of Covid-19 and the drugs used for it that cause immunosuppression.

There are hundreds of research papers on opportunistic fungal diseases.

The names 'black', 'white' and 'yellow' fungus are the common names given to various fungal infections based on the colour of the fungi.
When I heard about black and white fungal infections, I knew other colours are too coming because fungi occurs in different colours.
Links to the articles I wrote on them are given below
https://kkartlab.in/forum/topics/potentially-fatal-black-fungus-inf...
https://kkartlab.in/group/some-science/forum/topics/now-we-have-whi...
This article gives more examples: Deadly Fungi Are the Newest Emerging Microbe Threat All Over the World
* https://www.scientificamerican.com/article/deadly-fungi-are-the-new...
Some research papers on fungal diseases: