Recently there was a sensational news in my part of the world. It seems suddenly the waters of a part of the river Krishna near Nagarjunsagar Dam turned green ( the river waters here will usually be light blue in summer and muddy in rainy seasons) .

But why do water bodies suddenly change the colours?

It is mostly because of the algal blooms. A red tide or a green tide are common terms used for harmful algal blooms. Harmful algal blooms, or HABs, occur when colonies of algae—simple plants that live in the sea and freshwater—grow out of control while producing toxic or harmful effects on people, fish, shellfish, marine mammals, and birds. The human illnesses caused by HABs, though rare, can be debilitating or even fatal.

While many people call these blooms 'red tides,' scientists prefer the term harmful algal bloom. These blooms might produce toxins that kill fish and make shellfish dangerous to eat. The toxins may also make the surrounding air difficult to breathe.

But not all algal blooms are harmful. Most blooms, in fact, are beneficial because the tiny plants are food for animals in the ocean. In fact, they are the major source of energy that fuels the ocean food web.

A small percentage of algae, however, produce powerful toxins that can kill fish, shellfish, mammals, and birds, and may directly or indirectly cause illness in people. HABs also include blooms of non-toxic species that have harmful effects on marine ecosystems. For example, when masses of algae die and decompose, the decaying process can deplete oxygen in the water, causing the water to become so low in oxygen that animals either leave the area or die.

The freshwater and ocean blooms have been found to be anthropogenic, directly caused by nutrient pollution of nitrogen and phosphates from agriculture and intensive animal farming fertilizers, and household cleaning products. An EPA report in 2013 concluded that changing environmental conditions such as more algae growth is associated with current climate change, and may negatively impact the environment, human health, and the economy for communities across the US and around the world.

Although there is no officially recognized threshold level, algae can be considered to be blooming at concentrations of hundreds to thousands of cells per milliliter, depending on the severity. Algal bloom concentrations may reach millions of cells per milliliter. Algal blooms are often green, but they can also be other colors such as yellow-brown or red, depending on the species of algae. Bright green blooms are a result of cyanobacteria (colloquially known as blue-green algae) such as Microcystis. Blooms may also consist of macroalgal (non-phytoplanktonic) species. These blooms are recognizable by large blades of algae that may wash up onto the shoreline.

Of particular note are harmful algal blooms (HABs), which are algal bloom events involving toxic or otherwise harmful phytoplankton such as dinoflagellates of the genus Alexandrium and Karenia, or diatoms of the genus Pseudo-nitzschia. Such blooms often take on a red or brown hue and are known colloquially as red tides.
Freshwater algal blooms are the result of an excess of nutrients, particularly some phosphates.The excess of nutrients may originate from fertilizers that are applied to land for agricultural or recreational purposes. They may also originate from household cleaning products containing phosphorus. These nutrients can then enter watersheds through water runoff. Excess carbon and nitrogen have also been suspected as causes. Presence of residual sodium carbonate acts as catalyst for the algae to bloom by providing dissolved carbon dioxide for enhanced photo synthesis in the presence of nutrients.

When phosphates are introduced into water systems, higher concentrations cause increased growth of algae and plants. Algae tend to grow very quickly under high nutrient availability, but each alga is short-lived, and the result is a high concentration of dead organic matter which starts to decay. The decay process consumes dissolved oxygen in the water, resulting in hypoxic conditions. Without sufficient dissolved oxygen in the water, animals and plants may die off in large numbers.

Blooms of harmful algae can have large and varied impacts on marine ecosystems, depending on the species involved, the environment where they are found, and the mechanism by which they exert negative effects.

Harmful algal blooms have been observed to cause adverse effects to varying species of marine mammals and sea turtles, with each presenting specific toxicity-induced reductions in developmental, immunological, neurological, and reproductive capacities.

Marine mammal species, like the highly endangered North Atlantic Right Whale, have been exposed to neurotoxins by preying on highly contaminated zooplankton. With the summertime habitat of this species overlapping with seasonal blooms of the toxic dinoflagellate Alexandrium fundyense, and subsequent copepod grazing, foraging right whales will ingest large concentrations of these contaminated copepods. Ingestion of such contaminated prey can affect respiratory capabilities, feeding behavior, and ultimately the reproductive condition of the population.
Immune system responses have been affected by brevetoxin exposure in another critically endangered species, the Loggerhead sea turtle. Brevetoxin exposure, via inhalation of aerosolized toxins and ingestion of contaminated prey, can have clinical signs of increased lethargy and muscle weakness in loggerhead sea turtles causing these animals to wash ashore in a decreased metabolic state with increases of immune system responses upon blood analysis. Examples of common harmful effects of HABs include:

The production of neurotoxins which cause mass mortalities in fish, seabirds, sea turtles, and marine mammals.
Turtles, and marine mammals human illness or death via consumption of seafood contaminated by toxic algae mechanical damage to other organisms, such as disruption of epithelial gill tissues in fish, resulting in asphyxiation, oxygen depletion of the water column (hypoxia or anoxia) from cellular respiration and bacterial degradation
Due to their negative economic and health impacts, HABs are often carefully monitored. If people consume the effected animals they too will fall prey to these health conditions. Therefore, it is better not to consume fish and other animals such a s prawns, crabs etc. from these water bodies when the algal blooms becomes very prominent in them. And experts are asking people to stay away from the algal waters altogether because the cyanobacteria toxin can cause diarrhea, intestinal pain and liver problems, other toxins produced by the blue-green algae can harm the nervous systems of humans and wildlife (1). Tests of human cells have found that BMAA kills the motor neurons—nerve cells that control muscles—implicated in ALS.

UPDATES: (12/6/20) A crater lake (Lonar Lake) in India's western Maharashtra state has turned pink overnight, delighting nature enthusiasts and surprising experts who attributed it to changing salinity levels and the presence of algae in the water.

Lonar lake, formed some 50,000 years after an meteorite crashed into Earth, is located 500 kilometres (310 miles) from India's financial capital Mumbai and is a popular hotspot for tourists and environmentalists.

As photos of the lake's new flamingo-hued waters began to circulate on social media, experts said that although Lonar had changed colour in the past, the transformation had never been so sharp before.

"Salinity in the lake has increased as water level has gone down drastically this year and it has become warmer too resulting in overgrowth of algae", according to them. This algae turns reddish in warmer temperatures and hence the lake turned pink overnight (2).

Which river keeps changing its color?

In general almost all. Depending on the organic matter, the chemical composition and the resultant algal blooms, rain-bringing muddy nature, then sometimes crystal clearness. Water bodies do change their colours. Read here why:

However, if you are asking about a specific one that catches our imagination, the Cano Cristales, a river of Colombia located in the Sierra de la Macarena, is the answer.

For most of the year, Cano Cristales is indistinguishable from any other river: a bed of rocks covered in dull green mosses are visible below a cool, clear current. However, for a brief period of time every year the most amazing transformation occurs—the river blossoms in a vibrant explosion of colours. During the short span between the wet and dry seasons, the water level drops enough for the sun to warm the moss and algae on the river's bottom, and this warmth leads to an explosive growth of blooms. A unique species of plant that lines the river floor called Macarenia clavigera turns a brilliant red. It is offset by splotches of yellow and green sand, blue water, and a thousand shades in between. This only happens for a brief period in between seasons for a few weeks from September through November. Cano Cristales has been called the river of five colors.

The ‘Liquid Rainbow’ is caused by a unique phenomena: a red plant – Macarenia clavigera – growing in the riverbed. Other colours come from black rocks, green algae, blue water and yellow sand, producing an iridescent effect. The river also features waterfalls, pools and caverns, making it even more dramatic. 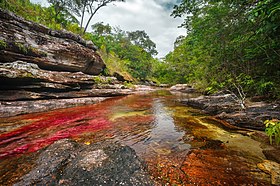 A summer bloom of algae  taints the water bodies, which are used as a source of drinking water. Chemical fertilizers that washed off of nearby farms  runs into the WBs. There, aquatic toxin-makers get a growth boost from the fertilizer. Solution: a tiny freshwater plant.

Called duckweed, it indeed slurs up fertilizer. Later, that duckweed can be harvested as feed for local cows.

Each plant is very small. Its tiny fronds run only 2 to 5 millimeters (0.08 to 0.2 inch) long. That’s less than half the length of a grain of rice. Each set of fronds has a single root that extends down into the water. Duckweed tends to grow in clusters that form dense mats at the surface.

This plant needs nitrogen and phosphorus, just as the algae do. Duckweed might soak up some of phosphorus from fertilizer runoff before it reached the algae.

Duckweed pulls the phosphorus out of both the high- and low-phosphorus water samples. In the process, the plants also “grew really, really fast", according to some researchers.