In recent decades there were many studies of  binocular rivalry tests that belong to the neuroimaging.

to see and fine art applications into Binocular Rivalry

Known criteria, which experts apply for approval of patents: originality and effectiveness 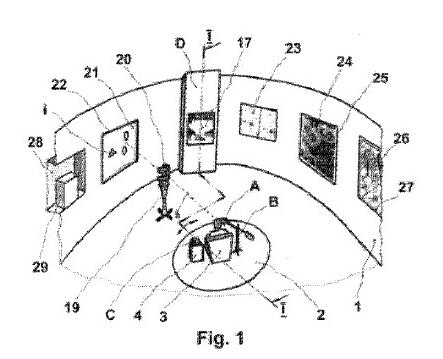 Comments and replays of texts relative to: 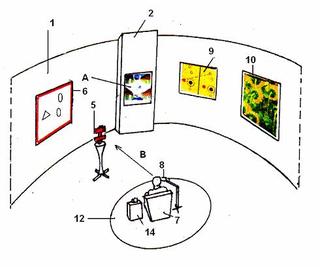 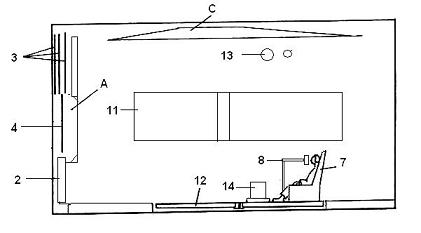 Figure 5.1 show the hall for psychotherapy.  Shows a section of the hall.

1 – Circular wall of the rotonde; 2 – Cupboard; 3 – Set of bioptical paintings; 4 – Bioptical painting (every painting of the set may be electro-mechanically driven to window A); 5 – Bioptical sculpture; 6 – Frame of a bioptical painting;  (The observer, seated in armchair 7 looks through the bioptical device 8 towards B and sees how the forms and colours of the sculpture and painting are floating in space. Some forms are viewed beyond the wall  (see the description of figure 4.8); 9 – Monitor (connected to a computer where kinetic forms and colours of a bioptical type are programmed, as described in Patent RO  112061 [13]). The patient may interfere, to modify lines and colours; 10 – Frame for photographic reproductions of the Joey Fischer-type; 11 – niches (with installations for long electrical discharges with thunder – of the lightning type – as well as for corona-type discharges); 12 – revolving platform  (where several sculptures 5 and reproductions 10 may revolve in angles up to 3600); C – indirect adjustable lighting, correlated to a spotlight B,with coloured filtres, for lighting up  painting 4, which is being seen in window A; 14 – set of devices for objective measurements largely performed by telemetry.

Laboratory for visual therapy, enables the association of numerous stimuli to highlight the favorable factors for the patient.

Among them are those that result from synergetic application in fine art techniques for binocular rivalry, color fusion, images, streoscopy, applying:

Highlight recent discovery relative to the effective implementation of binocular rivalry, which describe:

In this way they can establish hundreds of programs (recipes)

Concept offices are specialized groups of stimuli, equipped with specific means, so that means simplified, offices to The cylindrical wall (1) can be installed in a room with normal prismatic shape.

Above descends several mobile panels (P) to form a cylindrical wall inside (total or partial) for testing under conditions of protection (isolation) sound and the ability to create openings that occur gradually (by in each case) means for testing.

Since the case in the position (T) can sit therapist.

Building complexes for use and development of research in Binocular Rivalry should be established gradually in universities.

This item is added to my publication:

I keep coming back to the main idea noting that a vector can be defined
that reported psycho-physiological to the structure of would have dimensions:

Satiety feedback would appear on need be. A cyclic dynamics can also be noticed in the relation need – satiety as follows:
-Need is presented cyclically in succession with satiety.
-Primitive needs have a higher frequency (are installed in time more frequently) than the educated ones.
-Educated needs have a lower frequency, to the extent of an affiliation more remote from primitive needs, some of them become non-periodic (figure 15.1).

This vector could get qualifications:
-minor interest
-applicable in limited situations to developments by intelligence.
-of survival.
-as an attribute of life, in contact with the environment by adapting
reflex:  response (of contact agent) favorable - unfavorable.
- Divine vector

As fine art applications, to the attention of professional artists who feel limited by technical means.

The artists obsessed by their style, whose imminent subconscious emphasizes the role of everlastingness and progress in communication by means of fine art, will find out all about the way to create forms for a different contemplation modality.
See www.artabioptica.ro

The study of currents, movements, styles and manifestos of fine arts, tarting with Impressionism, as aroused interest in some questions:

- Why are there so many currents in a relatively brief historic period?
- Why have artists given up generous ideas and valuable contents after only a few years from their appearance?
- Is this only a quest for originality?
- Why do they rather quickly satiate affective experiences and are turned to account as decorative elements?

The causes are multiple, but could be considered a psychic saturation (satiety).

In connection with this, I quote a doctoral thesis, in which results of experiments, extending the concept of satiety, at physical state
of activity

2. Satiety may comprise very different areas of preoccupations and situations. You can saturate to interpret a particular study at the piano or even interpret, studies, in other cases not only studies but in general to play at the piano, and even to be saturated of music in general, so it was not you can listen or an opera or a concert. (translated from German) (1)

From Wikipedia, the free encyclopedia

Semantic satiation (also semantic saturation) is a psychological phenomenon in which repetition causes a word or phrase to temporarily lose meaning for the listener, who then perceives the speech as repeated meaningless sounds.

Possible to developments by applying the results of publication: