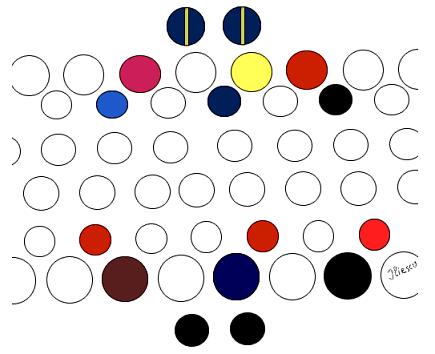 Should be viewed with both crossed-eye and parallel view

Liviu Iliescu – binocular rivalry, colour fusion and stereoscopy Should be viewed with both crossed-eye and parallel view.

(contemplated normally -with eyes free- appears as a conventional painting) 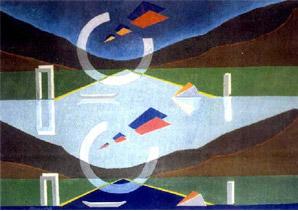 The horizontal binogramme is used in publications and, in some cases, as appendix to the vertical bioptical painting, for naked eye contemplation.

In the studies I performed so as to multiply the means in communications by fine arts, I considered the fact that the receptor subject should be as little influenced as possible by the optical intermediation elements so as to introduce in painting and sculpture the stimuli of: binocular rivalry, colour fusion and stereoscopy.

With respect thereto, influences in perception may be obtained by drifting away from object. For example, it is a well-known fact that observing the satellites of Jupiter through the astronomic telescope causes more powerful psychic influences than in case they are broadcasted by television.
I developed an optical device that fulfils the following features:
- Deviation from the convergence of the eye axes within the limits of medical prescriptions
- The optical system simplified at maximum, respectively, two plane mirrors positioned only in front of one eye, with modifications below 1% of the visible spectrum
- Low weight (~ 30 grams at the handmade model; weight could be substantially decreased in case of industrial production)
- Adaptable on various supports (for headset with and without using eyeglasses, for handle, for a support similar to the eyeglasses frame, to be adapted on eyeglasses).

The bioptical device is attached to the headset by means of a connecting link that enables a fast an easy movement in the three positions presented in the photos.

- Integrating the composition in the environment, because the eye that remains free perceives also the adjacent field (120 degrees)

- The possibility to accomplish the bioptical fresco. 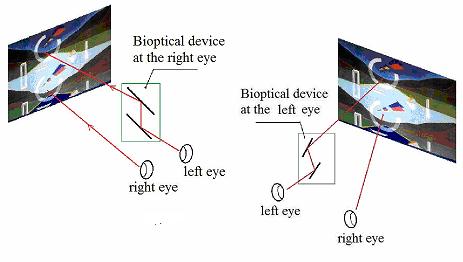 Moving the device from one eye to the other causes

essential modifications in the visual perception

For information on the contribution of Bioptical Art, in development
fine art, post: