This item is added to my publication:

I keep coming back to the main idea noting that a vector can be defined
that reported psycho-physiological to the structure of would have dimensions:

This vector could get qualifications:
-minor interest
-applicable in limited situations to developments by intelligence.
-of survival.
-as an attribute of life, in contact with the environment by adapting
reflex:  response (of contact agent) favorable - unfavorable.
- Divine vector

As fine art applications, to the attention of professional artists who feel limited by technical means.

The artists obsessed by their style, whose imminent subconscious emphasizes the role of everlastingness and progress in communication by means of fine art, will find out all about the way to create forms for a different contemplation modality.
See www.artabioptica.ro

In Perspective: possible completions in the field of philosophical aesthetics, at chapters:

Bioptical Art is a new chapter in painting and sculpture.

I present new techniques for visual communication, to the attention fine art artists.

In essence my research have been developed at the intersection of fields:

The methods they propose I highlighted a number of phenomena and effects, by the application them in fine arts compositions.

I present some examples of my compositions.
I describe a laboratory with equipment for the objective determination of psychic influence

Some of my hypothesis to overlap with some published by other authors.
In this article I claim only images and considerations about this.

The study of currents, movements, styles and manifestos of fine arts, tarting with Impressionism, as aroused interest in some questions:

- Why are there so many currents in a relatively brief historic period?
- Why have artists given up generous ideas and valuable contents after only a few years from their appearance?
- Is this only a quest for originality?
- Why do they rather quickly satiate affective experiences and are turned to account as decorative elements?

The causes are multiple, but could be considered a psychic saturation (satiety).

In connection with this, I quote a doctoral thesis, in which results of experiments, extending the concept of satiety, at physical state
of activity

2. Satiety may comprise very different areas of preoccupations and situations. You can saturate to interpret a particular study at the piano or even interpret, studies, in other cases not only studies but in general to play at the piano, and even to be saturated of music in general, so it was not you can listen or an opera or a concert. (translated from German) (1)

Further studies are recommended to be taken into care.

They may also be applicable in affection for the combination of stimuli, of psychical influence.

Will the emotional disturbances of operators have more effect during a changeover than when things are stereotyped? A number of assembly line situations, involving small numbers of workers, were studied. "In there experiments, involving four independent comparisons, we find precisely the same pattern of results. Emotional disturbance has little effect on stereotyped activity, but does have a disrupting effect on non-stereotyped activity. (2)

My research topic concerns the extension of research in communication of fine art, but think also interesting to extend the concept of satiety at affectivity.

How physical life includes intelligence, affectivity and activity propose for discussion some phrases.

In the genetic program would be a vector, utility- need- satiety.

Satiety feedback would appear on need be. A cyclic dynamics can also be noticed in the relation need – satiety as follows:
-Need is presented cyclically in succession with satiety.
-Primitive needs have a higher frequency (are installed in time more frequently) than the educated ones.
-Educated needs have a lower frequency, to the extent of an affiliation more remote from primitive needs, some of them become non-periodic (figure 15.1).

The vector may be formed during the time as early forms of life, so without the intervention of consciousness.

In this hypothesis would be found more suitable for component names.

Also, this vector could be considered as one of the concepts about the training reflexes to beings.

and you get 170 million results due to

hundreds of criteria by which Google shows huge files in order.

Selections always work as art critics and emotional state of

Development directions, could foresee and impetuous behavior of avant-garde artists.

It also appears to me that the criteria imporatnt appealing to Google, using themes, which aims

increasing the level of psychical influence, such as my recent attempt

Of course should be followed carefully scientific research results as evidenced by:

In developments, fine art I quoted in 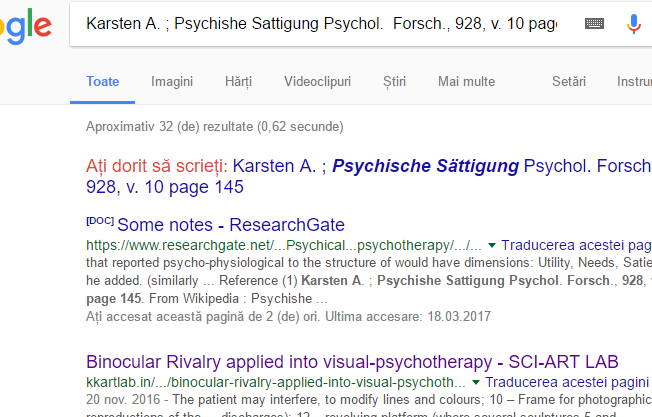