Science can tell what constitutes the beauty of a rose!  by Dr. Krishna Kumari Challa

presents further arguments for importance of science in the arts.

and regretted the attitude of some people not trying to see

art one of the means which tends to equilibrium in their body.

However, in a number of crucial ways we have to deal with things ourselves  in these areas, to find reasonable answers because you can analyse musical notes in a scientific way, but what is it that makes Beethoven so great? Why does great art move us and speak to us?  Because, again this is neuroscience, neuroaesthetics  to be more precise, these things match with our emotional states, create 'well being' harmones in our bodies.

I notice in connection with neuroaesthetics, several aspects related to my research.

Neuroaesthetics is detached as a science in 2002;

To be more explicit I shall refer to the following figure: 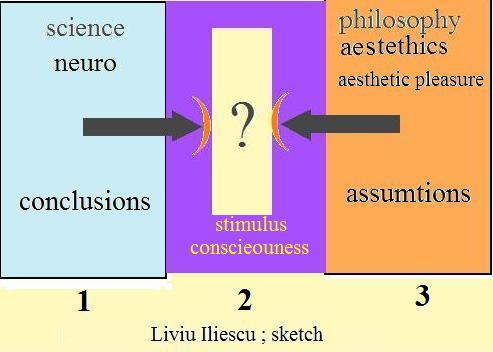 In section 3 enroll philosophical considerations (when they are), in which dominant assumptions about aesthetic pleasure.

Stimulus the  consciousness  (section 2) appears as a process resulting from the accumulation of eternity, which involves  metaphysical  interpretations (Divine presence)

Physiological correlates of aesthetic perception of artworks in a museum.

However, these aspects are private.

And I support the actions   that develop research in the area of contiguity Science Art, accompanied by philosophical considerations (aesthetic)

I give another quote from Dr.Krishna:

Recently  cosmologists took on the idea that the universe may be full of stuff like dark matter or energy - that we can't perceive with any of our senses or equipment available now. Just because you cannot see or perceive it, you cannot say it doesn't exist! You can first form a theory to explain some of the anomalies in your observations, find out ways to prove or disprove it, fit things into theories with these facts, then go ahead to understand things. There are things in this universe that are beyond your perceptions and feelings too! That is where science tries to fill the gap and show the true picture.

Emphasize those statements because they can put you in touch with my research.

Essence  in Bioptical Art  techniques that I propose is to extend skills in visual sense.

I have applied optical methods, taking the consolidated findings of studies in the nineteenth century.

These studies are based on nineteenth century just, expanding skills in visual sense.

If it is not possible for us humans to develop new senses us, it is still possible to

expand skills, as can be observed extending skills for visual sense

results of research in the nineteenth century.

Extract from my descriptions:

My publications on applications extend the skills in visual sense starting   in the year  1974.

I introduced my works stimuli similar to those used in the fields:

in the diagram above.

My work shall mean, in their essence, only using interactive discussions.

This is the case with experts who ignored my work so far.

Visual tests, such as binocular rivalry, colour fusion and stereoscopy, introduced in plastic art compositions, result in the enhanced efficiency of their psychic influence. Their advantage is that they induce contemplations largely independent of the observer’s level of training or professions. The stimuli introduced in compositions are  differentiated and correlated for the left eye as compared to the right eye.

The modalities of the bioptical art may be subordinated to an explosive development of research on binocular visual perception in the last decades of the 20th century, carried on these last years.

There occur important opportunities for visual artists to contribute not only to artistic communication but also to neuroimaging  and visual therapies. They boast special sensitivities in the visual field and may develop the imaginative universe.

I invite, people of different professions (including students)

to participate in a series of interactive discussions.

I can explain some aspects of the art and science.

These explanations will be based primarily on simple drawings,

to be executed by participants with my help.

This way you will contribute to experimentation

domain launched by me in the title Bioptical Art

Attached descriptions may be partially understood by some persons.

These descriptions will be recalled gradually and explained, along with other descriptions.

I will answer all questions that belong to Bioptical Art.

9. About a didactic experiment in bioptical art