How Picasso was wrong

Just now I read a Picasso Quote. It goes like this: The genius of Einstein leads to Hiroshimas.

What a misconception! And most of the time artists who cannot understand the importance of science and how it works say such silly things.

Einstein himself didn't approve Hiroshima and criticized it severely (1).

In 1905 Einstein had published his revolutionary equation showing that matter and energy were equivalent and interconvertible. There was much speculation by scientists on how that atomic power might be released, and, once released, sustained (by what is called a 'chain reaction', on which ordinary fuels and explosives rely). During the 1920s and 1930s many physicists struggled with the problem. Einstein was right: science was international. American, Australian, British, Danish, Dutch, French, German, Hungarian, Italian, New Zealand, Russian, Swiss and Yugoslav scientists between them made the various research breakthroughs needed to show that an atom of uranium could be split by a neutron beam and would readily produce a chain reaction - thus releasing enormous amounts of energy. It only remained to put it to the test. The Hungarian physicist Leo Szilard tried hard to stop publication of the news (which broke in January 1939) that atomic fission was possible: he was afraid that Germany might try to make an atomic bomb if it knew. But the principle that scientific information should be shared was a matter of pride; it was released.

Then Einstein,  sent a letter to the then American president, Franklin Roosevelt.

In his letter Einstein wrote: 'Some recent work leads me to expect that the element uranium may be turned into a new and important source of energy in the immediate future. Certain aspects of the situation seem to call for watchfulness and, if necessary quick action....This new phenomenon would also lead to the production of bombs, and it is conceivable that extremely powerful bombs of a new type may be constructed....Some of the American work on uranium is now being repeated in the Kaiser Wilhelm Institute in Berlin.

Apart from a second letter written when the advisory board seemed to be dragging their feet, Einstein took no other part in the UK/US study of uranium fission or in the USA's Manhattan Project which created the first atomic bombs.

Einstein also believed that the USA would treat the discovery with respect and would resist actually using the bomb.

In April 1945 Leo Szilard, Physicist and inventor, came to Einstein again, this time to share his deep fear that the USA would start an atomic arms race. Once again Einstein wrote to the President, enclosing a strong warning (written by Szilard) against using the atomic bomb. But the letter was still unopened on Roosevelt's desk when he died. The new president, Harry Truman, was too busy taking office to be accessible, though the scientists tried hard to get through.

The first atomic bomb was dropped on Hiroshima (not on its military installations but on the civilian center of the city) on August 6 1945. Up to 140,000 people were killed. Thousands were to die much later, of radiation-related diseases: the death toll had reached 192,000 in 1995. When Einstein heard the news, he uttered a cry of anguish. On August 9 a second bomb was dropped on Nagasaki. It killed 73,884 people outright, and injured 76,769 more; these figures do not include those who died later from radiation.

Einstein said then, 'Just as we use our reason to build a dam to hold a river in check, we must now build institutions to restrain the fears and suspicions and greeds which move people and their rulers....We do not have to wait a million years to use our ability to reason. We can and must use it now, or human society will sink into a new and terrible dark age.'

From then until his death, and despite poor health, Einstein gave all the energies not spent on his scientific work to campaigns for peace.

He opposed the development of atomic weapons and the US military's intention to develop the much more powerful hydrogen bomb. He was chairman of the Emergency Committee of Atomic Scientists, set up in 1946; its aims were to educate the public about the dangers of atomic warfare, to promote the benign use of atomic energy, and to work for the abolition of war as the only answer to weapons of mass destruction. (The ECAS disbanded in 1949, but continued to publish its Bulletin of the Atomic Scientists.) Einstein also continued his public opposition to militarism.

Einstein knew that there was no way to stop scientists from pursuing knowledge. 'We must not condemn man because his inventiveness and patient conquest of the forces of nature are exploited for false and destructive purposes.'

'The line of demarcation,' he said, 'doesn't lie between scientists and non-scientists; it lies between responsible, honest people, and the others.' That didn't let off scientists from thinking about the consequences of what they do. 'In our time, scientists and engineers carry a particularly heavy burden of moral responsibility, because the development of military means of mass destruction is dependent on their work.'

"I have always condemned the use of the atomic bomb against Japan but I could not do anything at all to prevent that fateful decision," Einstein wrote in German to Shinohara, a Japanese woman in a letter dated June 23, 1953.

So? How can artists blame scientists for the political decisions taken despite their severe opposition to them?

I created an art work based on this very theme ... THE CHOICE IS YOURS 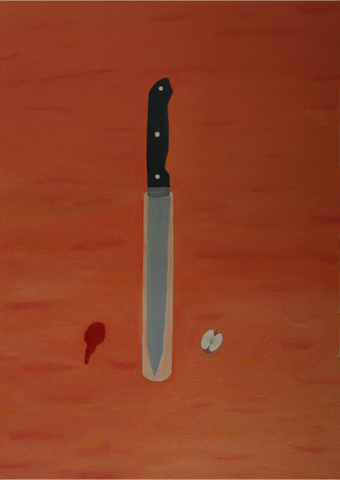 Some people complain that science also brings with it a few bad things like commercial GM crops, nuclear bombs etc. along with the good it does to the mankind. But according to the scientific community – science is like a knife. A knife can be used to cut throats and spill blood. It can also be used for good purposes like cutting fruits and vegetables. It depends on the person who uses it. Likewise science (represented by a test tube in the painting) can also be used for the benefit of living beings as well as for their destruction. Which way it goes is in the hands of the person who uses it. The choice is definitely yours, Homo sapiens.

Artists, and non-scientists get this right: Don't blame the scientists for the bad happening in the world. If you don't know how to use the scientific inventions and discoveries correctly, you have to blame only yourself!

The genius of Einstein didn't cause Hiroshima. A stupid political decision did.