Are you ready for it? And do you have it?

It seems in his poem Lamia, 18th century romantic poet John Keats takes Isaac Newton to task for extending a scientific explanation to the existence of a rainbow.

Keats is known to have bluntly stated that the scientist had “destroyed all poetry of the rainbow by reducing it into a prism”.

Poet Edgar Allen Poe continued this condemnation, with his 1829 poem Sonnet to Science (1)

But Roberts, head of professional development at the Winchester School in Dubai, disagrees with the notion of viewing science independently of the arts.  “In my opinion, Newton didn’t do any such thing,” he says. “He just added to our sense of wonder of the rainbow. Understanding the rainbow is refracted light in no way takes away from its beauty and majesty.”

Dr. Sam Illingworth, a lecturer, poet and science communicator says... the more we find out about science, the more we realise what a beautiful and incredible world we live in. The fact that the patterns on a pinecone match those of the Fibonacci sequence, or that we can stare back into the void a few seconds after the creation of our Universe is, to me, a beautiful thing.

Yes, and in fact science increases the beauty of anything by contributing more to our understanding. Isn't it wonderful to know how Nature takes the help of science and disperses sun light into seven beautiful colours using the prism of water vapour in the atmosphere? How rainbows come into existence?

Science isn't cold and impersonal and dry and dull. It doesn't delete the mystery out of life. Knowing how something works doesn't make it boring. Quite the contrary! Things are far more fascinating to me since I entered the field of science and started understanding things in a very detailed manner. Nothing seems like it's been torn down. Well, maybe temporarily, while we reduce big bits to easier-to-understand-bits, but we don't leave the pieces lying around after. We put it all back together, and with this new understanding, the thing we're studying becomes far more fascinating than it was before. The truth is more complicated, far stranger, more wonderful than anything our paltry imaginations could come up with. The world without science becomes a substandard one. And science makes me wonder all the while and crave for more and more! Science is a magnet! And art and creativity increase its power and richness  more and more!

This is the view of scientists: Science is very interesting and extremely exciting! The enchanting charms of this sublime science reveal only to those who have the courage to go deeply into it. And its beauty is revealed to those who have special vision to capture it!

This inspires you to write poems and create art works too.

But artistic creativity is fundamentally different from scientific creativity. Artist's depend mostly on "their thoughts, ideas, beliefs and personal views" for their work whereas scientists' base their work on natural laws and facts and how to fit their informed ideas into these laws to creatively invent or discover something. The imagination of a scientist is based on reality. A scientist has to get his imagination right to succeed  where as the artist need not do it right to move forward. In fact, the inadequacies of artists' imagination are what moves the art world forward! They are not the same like several people think and say. At the basic level some overlapping occurs but as you go deep into the subjects, the differences become very clear and I always wonder why people say both artists and scientists do things in similar ways. I think, people who are experts in only one field try to analyse things in other fields too such illusionary perceptions   arise. I will give an example here. When artists, writers and poets look at the moon they see it as a silver ball in the sky and describe it or paint it in this manner. I even read some stories where the crescent moon was described as a jewel in the hair of a God! This thinking reflects in their creativity ( metaphor and fiction). Now scientists think in terms of a rocky, dusty satellite that moves in space around the earth trapped in its gravity field when they think about the moon and they use their creativity to take the help of the gravity of the moon to accelerate space ships or change their course to send them to other planets to save fuel and time - the mechanism is called "gravity assist "  ( fact). Artists and poets even blamed scientists for disrupting their romantic ideas about moon by landing on it!
(taken from one of my blogs posted on Sci-Art Lab)
So when a scientist writes a poem about science, he or she writes it based on reality and facts if science communication is the aim in writing a poem (my way of doing things). If s/he wants to write like an artist with artistic creativity as the reason to go about it, it will be based on metaphor/fiction. There lies the difference!
Of course you can mix both and write a hybrid too! I wrote one or two hybrid poems.
We have to be very clear about our objective and why we are going for it.

And Keats didn't know how to write poems on prisms! Because he didn't know how it works! Artists and poets who don't know how to create art works with a new vision that delves deeply into the basics of this scientifically created universe will complain and blame scientists.

Here is how you can write poems on the topic:

Follow Science only in the way a Scientist's mind would allow

Create art with an artist's heart

Music of Science that can create magic

A touch of art only electro-magnetism can match

Art and science that can never part

Whose appeal has a universal base

Science in art or is this art in science

Stamp of a polymath or a hard work's pomp?

People who only want to see the partial picture of colours and admire the rainbow's  beauty, can never see the wonder of  its origin, how you too can make rainbows using the knowledge and how this realization takes  them to sublime states.

Only when you have the ability to see the whole and the right picture and appreciate it and make use of it can you understand this. You need a new vision that comes at the confluence of science and art to go to these ultimate levels of glorious heights.

If you don't have this vision, develop it! It makes life more meaningful and very attractive! 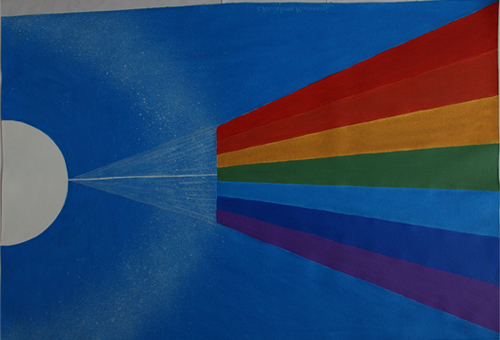 The true spirit of delight, the exaltation, the sense of being more than Man, which is the touchstone of the highest excellence, is to be found in mathematics as surely as poetry.
Bertrand Russell

The true spirit of delight, the exaltation, the sense of being more than Man, which is the touchstone of the highest excellence, is to be found in mathematics as surely as poetry.
Bertrand Russell