Love Science, not its impostors!

Science, oh dear science
We love and respect your appliance
In our daily activities so much
That we cannot imagine a life without your touch!

We live in a region where science is loved and held in a very high esteem. The religions people practice here are very science friendly. His Holiness Dalai Lama, to the pleasant surprise of my Western scientist friends, once said: "My confidence in venturing in science lies in my belief that as in science so in Buddhism, understanding the nature of reality is pursued by means of critical investigation: if scientific analysis were conclusively to demonstrate certain claims in Buddhism to be false, then we must accept the findings of science."
Our cultures too respect science with bowing heads and say that everything that has originated here was based on knowledge related to science. This is because, "Bharat", India's another official name, itself means 'devoted to light/knowledge'! Our traditions tell us to practice those that are grounded in science. We are a very happy bunch of people practicing ancient customs that have roots in modern science!
Wait a minute. What did I say? 'Practicing ancient customs that have roots in modern science?' Are we Time Travellers using Time Machines? Does time go backwards from future to past? How is this possible? Before someone asks me the favourite question of teenagers, "Are you crazy?” I want to clarify that I am only repeating what our politicians here say. Yes, our leaders too love science and feel our ancestors are ahead of times and know all things scientific we are using now!
My western friends think we have absolutely no problems with regard to science as everybody and everything here are favourable towards the big "S" and that it can flourish here for thousands of years to come - engulfing, enlightening and enriching us.
But ... there is a twist in this wonderful story of science ... some people are trying to use this very unquestionable trust people here have in science for their benefit with the result that pseudo-science is running parallel to real science now in this part of the world!
Science is what it is because of the 'scientific methods' people of science follow, not because of just the name. The principles that are followed by everything in this universe are scientific in nature. This universe is 'scientific' because of this. These are the very facts that are being ignored by people here while using the name 'science'. And the result of this: misuse of science, the genesis and proliferation of pseudo-science and deceived public.

Business people claim their merchandise like beauty and health-care products, detoxification techniques used in health clinics, teaching skills, food processing, alternative medicines and several other things were based on science and urge people to accept and buy them through various advertisements in the media.
'The nose ring worn by women here purifies the air we breathe in. They even kill the germs that try to enter the nose'.
'The toe rings are good for the female reproductive organs hence worn after marriage'.
These are not stories written by science journalists on All Fools day. These are tales we read on various media outlets that say our traditions and culture were built on 'solid' science.
We were forced to replace the word 'solid' with 'pseudo' after testing a few claims and the scientific community here is fighting this menace to protect the integrity of science now.
We (four women scientists) ourselves tried to see how the nose rings can prevent respiratory diseases caused by microbes by painstakingly wearing them for six months and testing the results in our Microbiology labs a few years back just to find the fallacy of 'traditional science'. We did this to prove to its followers the truth as we didn't want to completely dismiss their arguments without testing. And we took complete care not to 'p-hack' the results.
It is not always easy to do experiments to show evidence. There are thousands of claims like these and we know we cannot dismiss all of them. It takes lots of effort and time to follow so many cases and test their validities. So we reason first. We discuss. Reject the ones that sound silly. We try to test some. Ask for expert advices in a few cases. And the fight is going on...
One very important aspect of this campaign is we are trying to educate people on how to differentiate real science from pseudo-science.
The important difference between science and pseudo-science is a difference in approach. While pseudo-science is only set up to look for evidence that supports its claims, science also accepts challenges and look for evidence that might prove it false.
If a scientific depiction of the world is wrong, the scientific outlook allows us to accept this and seek a different picture. The scientific position is aimed at locating and removing the false claims - something that doesn't happen in pseudo-sciences. Instead of starting with the facts and reaching a conclusion, the pseudo-science promoters first take a conclusion and try to cherry pick facts to support it. Of course, sometimes there will be no facts, so they have to 'invent' them.

Intellectuals don't believe everything they read or hear. They don't accept the face value of a theory! Just believing in any 'scientific' theory is just a description about you. It is not an account of how you reason. Studying, understanding the data, neutrally and critically thinking about what you come across, tallying it with natural laws, then accepting what makes sense is what makes you a real person of science.
The very first thing to do is to check the source of a claim. Was it published? Where was it published? Does the article give a citation to a legitimate peer-reviewed high quality science journal? Then it is probably reasonable to accept it. Some scientific literacy is a must to distinguish between scientific and pseudo-scientific articles. If one doesn't have this advantage, one can always take the help of pundits. Peer-review is a process based on the simple idea that only experts are qualified to evaluate the work of other experts. Peer review is a pretty high standard domain, though it cannot always detect deliberate deception. Frauds that make it through peer review can often be identified when other researchers try to replicate or build upon the results of a scientist’s published work. Therefore, it is not easy to fool experts on the subject.
Books and blogs are problematic, because you cannot tell for sure whether they are based on authentic data or not unless the authors give citations. People can publish anything they want in them. One has to be cautious when someone cites a book or a blog as their source for a finding.
Journalists, even those who specialize in science reporting, get things wrong much more frequently than one might think. So if a news source reports a science finding, it can be worth checking the journal article they are basing the report on because there are some dubious science journals too. Moreover, journalists need not be neutral. They are sometimes associated with vested interests. Therefore, they might try to 'influence' people with pseudo-scientific stories.
Science is based on the philosophy that there are logical explanations for natural phenomena. Any unreasonable explanations and anything that violates the laws of science are by definition non-scientific.
Personal experiences don’t count for the purposes of scientific research. A single person’s testimony is not useful for scientific knowledge, which requires reproducibility. If people claim that they have done 'research and studies' on the products they are promoting or selling, ask them whether they have followed authentic scientific methods and published their work in peer reviewed legitimate journals and if they have, to give references to their papers. Then, read them, ask tough questions to identify the facts and differentiate them from half-truths.
Scientific knowledge is progressive, building upon a history of tested and accepted or rejected ideas and experiments. Therefore, the most recent information is the most useful because of this process. With pseudo-science, however, the opposite could be true. The oldest findings are considered the most valuable, and lost knowledge is revered more than research published recently. Ancient knowledge was built on the conditions and information processing available then which was very limited both in terms of quantity and quality. It was untested 'scientifically' too. Hence, it need not be always correct.
Keeping these things in mind would definitely protect one form pseudo-science. Yes, we love genuine science, not its impostors.

When we have genuine science , why go for pseudo-science?

When we have science, genuine science
Which is carved out of data reliance
One that which strictly sticks to methodology compliance
Why go for pseudo-science?
Science doesn't fear falsifiability
Adores error-free testability
Complies with techniques modernity
Comes out with cent percent purity!
Realize your beliefs can't be truth
Faith can't be growth
Wishes can't be rides smooth
Only facts and data you should deal with!

Look how pseudo-science is being propagated...

Some Qs on pseudo-science and my replies to them

Love Science, not its impostors!

Why Astrology is Pseudo-science

Be alert - Pseudo-Science and Anti-Science are on the Prowl!

Reasons for pseudo-science prevalence in this part of the world

Can courts decide what is science and what is pseudo-science?

What demarcates science from nonsense

The persons you should be consulting before building a house should...- the pseudo-science of Vastu Shatra

How pseudo-science is born

How misinformation and junk science are winning battles online

Fact or fake? The role of knowledge neglect in misinformation 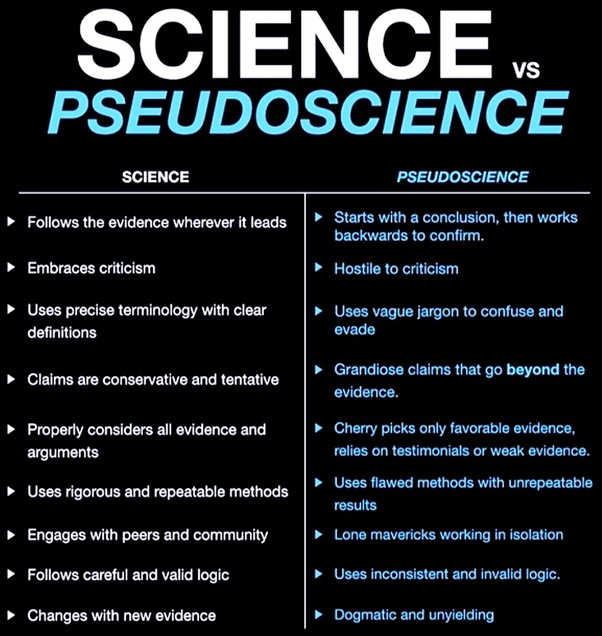